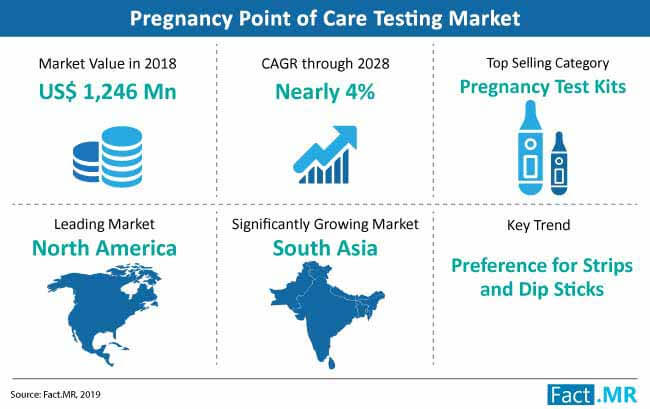 What are the Key Growth Drivers of Pregnancy Point of Care Testing Market?

What are the Key Challenges in the Pregnancy Point of Care Testing Market?

Abbott Laboratories was established in 1888 and is headquartered in Tokyo, Japan. Abbott Laboratories is one of the leading healthcare company in the world that offers a wide range of in vitro diagnostic products. The company acquired Alere, Inc. and St. Jude’s Medical, Inc. in 2017, and aims to continue expanding in emerging economies through acquisition strategies in the upcoming years.

Founded in 2007, Swiss Precision Diagnostics (SPD) GmbH is headquartered in Geneva, Switzerland and is a leading provider of consumer diagnostic products. The company was established as a joint venture between Alere Inc. (Abbott Laboratories) and Procter & Gamble (P&G), which are two leading manufacturers of consumer diagnostics products. The company supplies its diagnostic products through its brands including Clearblue, Persona, Fact Plus, Crystal Clear, and Accu-Clear.

Church & Dwight Co. Inc. was founded in 1846 and it is headquartered in New Jersey, U.S. The company offers its personal care products under the range of over 80 of its flagship brands, including FIRST RESPONSE™. The company operates through its three business divisions – specialty products, consumer domestic, and consumer international. The company launched its first Bluetooth-enabled digital pregnancy PRO test in 2016, and it aims to expand its presence in countries outside the U.S. with a major focus on mergers and acquisition.

Social norms vis-à-vis the age of motherhood have changed in developed countries with remarkable speed, especially among highly-educated women. Increasing concerns about women’s health and pregnancy are triggering the adoption of pregnancy test kits among women.

On the contrary, the ease of use and technological advancements in pregnancy test kits has been boosting its demand, marking an emerging trend in the pregnancy point of care testing market.

*277 figures and 59 tables includes by FactMR