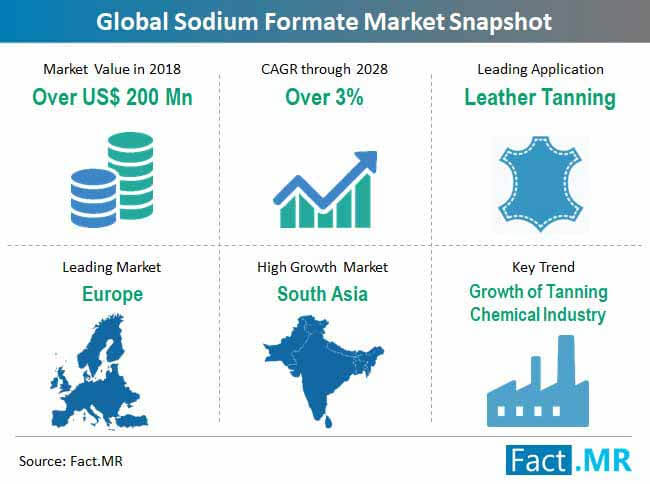 According to the Fact.MR study, consolidation of market leaders is characterizing the global competition landsacape of sodium formate market. While the key companies actively operating in sodium formate marketplaces are focused on retaining their global footprint on the basis of stronger sales strategies, improvement of their regional foothold will remain highly influenced by application-specific strategies.

For instance, the European market for sodium formate has been recently observing prioritization of sodium formate production capacity expansion by regional leaders, who are keen on tapping the escalating demand for sustainable de-icing solutions for airport runways, bridges, and other structures within the region that always demand an effective de-icing treatment.

On the other hand, followers in the competition landscape are likely to majorly rely on strategic partnerships to achieve a dual objective of enhanced manufacturing output and business expansion.

The Fact.MR study finds that the forerunners in sodium formate market have a primary focus on expanding their international establishments, with an increased emphasis on cementing their presence in lucrative markets of South Asia and East Asia.

Growing stringency of the environmental regulatory standards have been resulting in a significant decline China’s domestic supply of sodium formate, which is subsequently challenging companies to keep abreast of evolving market dynamics. China’s tightening environmental regulatory framework will also remain a pivotal factor influencing production of sodium formate over the coming years.

Downstream manufacturing facilities specific to production of de-icing agents are garnering strategic interests of sodium formate market players. In line with the pricing volatility of raw materials used in the manufacturing of sodium formate, it is highly likely that an increasing number of manufacturers will leverage advancing technologies to explore their potential substitutes.

Cosmetics is currently being perceived as an attractive application area by several sodium formate manufacturers, which signals a relatively progressing growth outlook for the sodium formate market in the near future. R&D investments will thus be an important part of developmental strategies adopted by companies operating in the sodium formate industry.

Potential Applicability of Sodium Formate as an Animal Feed Additive

Currently, multiple research studies on sodium formate are attempting to explore its potential as a feed additive, more precisely, as a feed acidifying agent. In the backdrop of sustained need for the presence of balanced dietary electrolyte in poultry and swine feed, sodium formate is likely to emerge as a potential additive to animal feed.

The role of sodium formate in production of fermented dairy and soyproducts is also being examined in some of the ongoing studies.

An extensive methodology and a holistic approach lay the foundation of the incisive insights on the sodium formate market landscape. The Fact.MR report provides exhaustive information pertaining to the growth prospects of sodium formate industry along with intriguing insights into the projection analysis of the market.

What is the CAGR for Sodium Formate Market?

Sodium Formate Market Is Anticipated To Grow At CAGR Of 2.8% During The Forecast Period By 2030

What is the growth rate of the global Sodium Formate Market?

Sodium Formate Market Is Anticipated To Grow At 2.5% Over The Forecast Period By 2027