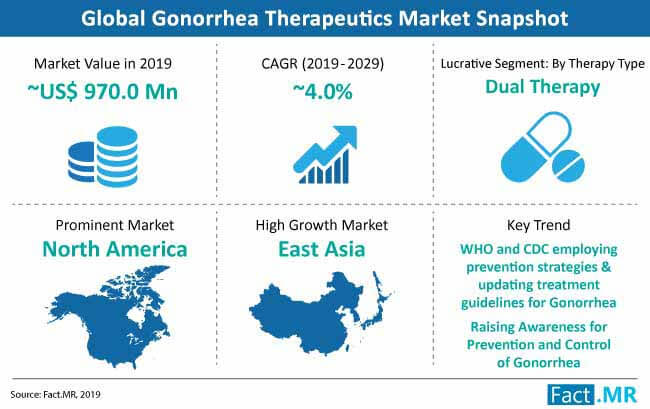 According to our study, the gonorrhea therapeutics market will remain a fairly fragmented landscape, with a large number of contenders collectively holding relatively greater shares than the frontrunners and competitors in the market. With ~40% market shares, the contenders are competing with product innovations in active therapy areas, targeted drug delivery, and capacity expansion to meet growing demand for therapeutics abreast escalating prevalence of gonorrhea.

Frontrunners in the gonorrhea therapeutics market are focusing more on diagnostic tests and services, and R&D dedicated to biosimilars and generics.

The stakeholders in the gonorrhea therapeutics market are more focused on strengthening their distribution in untapped markets, even as entering into strategic partnerships with local distributors to enhance their supplier force and propel sales.

Growing prevalence of antibiotic-resistant gonorrhea has meant that the need for new drugs is evident, as a significant chunk of the global demographic falls prey to the Neisseria gonorrhea bacteria annually. Although progress in gonorrhea vaccines has slugged in the past, recent advances allude an uptick, with conserved vaccine antigens that stimulate bactericidal antibodies being recognized. 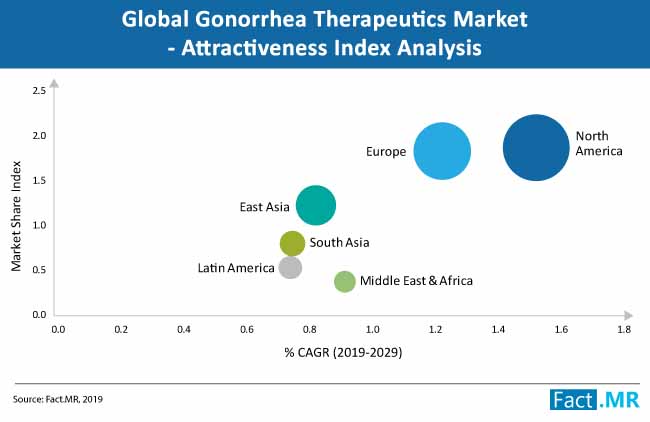 Antimicrobial resistance (AMR) has become a rapidly growing global public health threat. With AMR making more than 375 million annual new cases of sexually-transmitted infections (STIs) that are stringent to treat, there has emerged a dire need to tackle this upcoming health crisis.

The bacteria that causes gonorrhea is particularly prone to drug resistance, and is classed as ‘high priority’ for renewed antibiotic R&D by leading health organizations.

Turning into a global public health concern, in line with the high unmet need for gonorrhea treatment, growing prevalence of this infection has propelled organizations to collaborate and develop a novel treatment in this light.

For instance, Entasis Therapeutics and the Global Antibiotic Research & Development Partnership (GARDP) had collaborated to co-develop a new drug zoliflodacin, specifically to treat drug-resistant gonorrhea, while hoping to provide a solution.

Zoliflodacin is a new and first-in-class oral antibiotic that inhibits DNA synthesis in a different way than currently approved antibiotics. Zoliflodacin has been awarded fast track status by the FDA for development as oral treatment for gonorrhea infections, which is likely to translate into significant gains for the gonorrhea therapeutics market in the years to come.

*202 figures and 52 tables includes by FactMR