Fact.MR estimates fused silica market value to reach USD 3,474 million valuation by 2032 end, and projected to account for nearly ~15% of the overall silica sales value during the same timeframe.

Additionally, fused silica consumption is projected to increase with a CAGR of around 5.5% over the period of 2022-2032 with market being valued at USD 3,474 million by 2032 end, evaluates Fact.MR- a market research and competitive intelligence provider.

Moreover, production of fused silica stood at around 50 Kilo tons in 2021, accounting for 18% of total silica production and is poised to grow with a CAGR of around 5.0% with production projected to reach 85 KT by 2032 end.

Attributed to properties of fused silica such as resistance to heat and zero thermal expansion tends to provide long term mechanical and chemical stability along with significant optical properties. Hence driving fused silica’s popularity to be used in chemical and electrical & electronics industry.

As per Fact.MR- a market research and competitive intelligence provider, global fused silica consumption in the past half-decade has grown with a CAGR of around 5.0%. While global volume consumption by 2021 end stood at around 50 KT. Application which saw major consumption of fused silica was semiconductor. This is mainly attributed to the level of purity shown by fused silica thus making it fit to be used in semiconductor application.

Additionally, projections are that growing demand for electrical appliances and electronic devices will provide major thrust to the production of fused silica over next decade especially in high growth regions such as Asia Pacific. Asia Pacific being hub for semiconductor manufacturing is poised to infuse the demand for silica over next ten years.

Further, fused silica can withstand extreme temperatures of upto 1,200 degree Celsius which makes it suitable for deployment in applications such as solar cells, thus growing renewable setups globally is poised to boost fused silica sales in the coming decade.

Attribute to above discussed factors fused silica has been valued at USD 3,474 Million by the end of forecast period.

Why Adoption of Optical Fibres is Poised to Drive Global Fused Silica Market?

Fused silica tubes owing to its chemical purity and geometric tolerances are being preferred in manufacturing of optical fibres. Moreover, internet connectivity is on rise which calls adoption of optical fibres for fast services.

Attributed to above discussed factors along with rising demand for intern connectivity will drive growth of fused silica over the forecast period.

South Korea is among the leading consumers for fused silicon owing to the multibillion dollar semiconductor industry which exist there. Additionally, South Korea is a hub for electrical and electronic industry too which has been identified as a major consumer for silicon. Moreover, leading chipmakers in South Korea such as Samsung and SK Hynix can be seen pouring in investments for semiconductor development which will boost the demand for fused silica over the coming years.

For instance, country plans to invest a total of USD 450 Bn in chip making by 2030 which will provide major thrust to the consumption of silica in South Korea.

Attributed to these factors South Korea is poised to provide high absolute $ opportunity worth USD 300 Million through 2022-2032.

China is leading the digital ground by satisfying the demand for both its local and international consumers. Additionally, China is the leading producer of semiconductors. For instance, in 2021 China produced around 28% of the global semiconductors.

Moreover, rising electrical and electronic appliances demand in the country is another factor fuelling the growth of silica and is poised to remain the lucrative market for fused silica sales.

Thus China is projected to provide absolute $ opportunity worth USD 500 Million through 2022-2032. 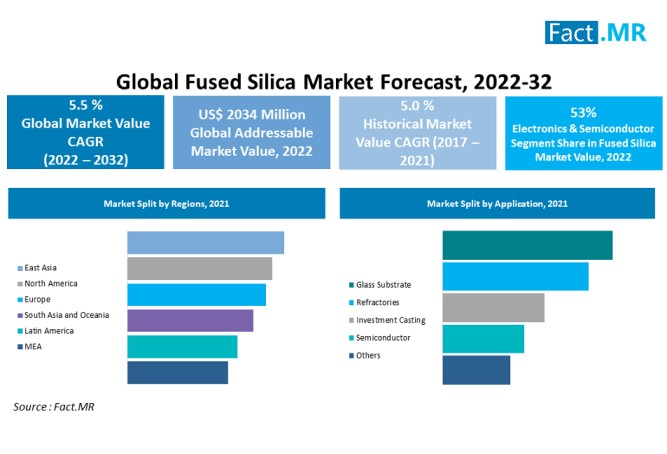 Which Application in Projected to Propel Fused Silica Growth in the Market?

Fused silica application as glass substrate is poised to be the most lucrative segment for manufacturers. This is due to the fact that fused silica glass substrates are used widely in making of the optical fibres.

Additionally, amongst all glass which are used used in optical fibres, fused silica is leading the scenario, especially in for manufacturing of telecom fibres, as it showcases number of favourable properties, for example wide wavelength and good optical transparency.

Moreover, attributed to the above discussed factors fused silica application as glass substrate will provide high absolute $ opportunity worth USD 700 Million through 2022-2032.

Which End Use Will Drive the Global Fused Silica Sales?

Usage of fused silica has primarily been in electronic and semiconductor industry. Properties which have been driving the silica demand in these industries are its good insulating and dielectric properties. Additionally, electronics and semiconductor is projected to gain around 300 BPS in its market share thus accounting for around 57% of the total revenue growth by 2032.

Hence, electronics and semiconductor end use industry is poised to provide absolute $ opportunity worth USD 900 Million through 2022-2032.

Market players involved in the production of silicon can be seen carrying out production capacity expansion to gain market share and hence competitive advantage.

How much is the current worth of the fused silica market?

Fused silica consumption value is expected to grow at a CAGR of around 5.5% during the period 2022-2032.

How has been the performance of fused silica market over the past half-decade?

Key players can been mainly seen involved in expanding their production capacity to meet the rising demand for fused silica.

Who are the vital manufacturers of fused silica?

What outlook does the China provides for fused silica market?

China is estimated to hold around 34% of the global fused silica market.