There has been a steady increase in the incidence of cardiovascular diseases in recent years, with heart diseases becoming a major cause of fatalities, in both, developed and developing countries, globally.

With this prevalence only set to increase in the future, the demand for balloon angioplasty for the treatment of severe cardiovascular conditions is on the rise, the impact of which has been directly proportional to the growth of the global angioplasty balloons market. 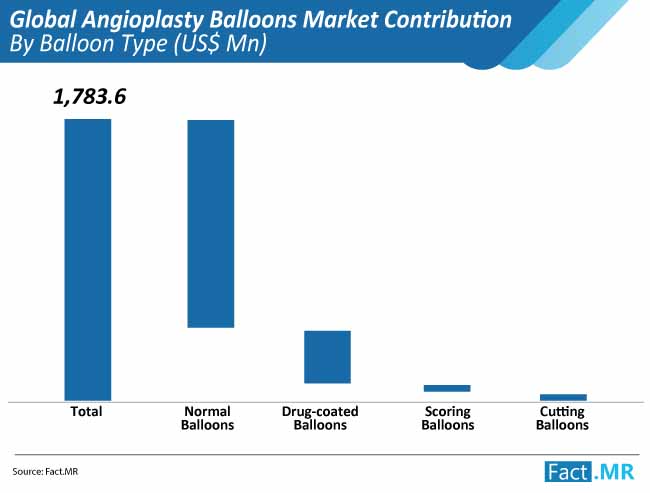 Major players in the global angioplasty balloons market are improving their product offerings by incorporating advanced technologies to pace up with this growing demand, while aligning with the pervasive trend of 'value-based' healthcare.

These players are increasingly focusing on newer angioplasty balloons made of different materials and new products that work differently, while also looking to improve on their existing products, in order to have a positive impact on patient outcomes.

Preference for Drug-coated Balloons Increasing at a Rapid Rate

The popularity of these balloons can be attributed to their various benefits, including superior safety and effectiveness, resulting in improved blood flow for better medical outcomes. An analysis of the historical data reveals that, the drug coated balloons segment, which in 2019, occupied ~30% of the total market share, is set to register a Y-o-Y growth of ~4% in 2020.

Even as drug-coated balloons continue to gain popularity, the demand for cutting balloons has been gradually declining. At the time of their advent, cutting balloons witnessed exceptional interest, as they were a step up as compared to conventional uncoated normal balloons;

however, the stiffness of the device, coupled with the risk of complex lesions, led to their popularity declining over the years. However, as a technological advancement that became a stepping stone to other types of balloons, cutting balloons have, nevertheless, had a significant impact on the evolution of the angioplasty balloons market.

A decline in the average selling price of angioplasty balloons has been observed in recent years, which is likely to act as a restraint to the growth of the global market.

While the prevalence of the disease and demand for treatment is set to rise, this decline in average price is expected to have a negative impact on the overall revenue of the landscape.

This can be explained by various players looking to retain their competitive edge in regional markets, by adopting competitive pricing strategies, adversely impacting the revenue of the overall angioplasty balloons market. 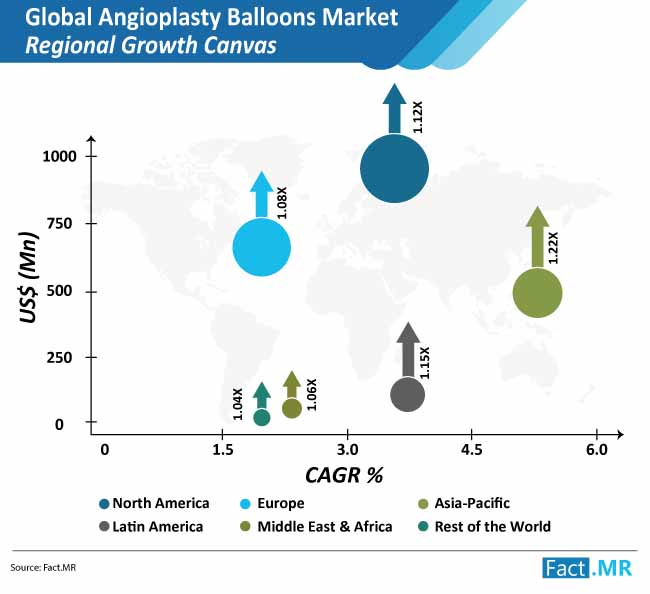 The regional markets occupying the largest share of the total revenue of the global angioplasty balloons market are North America and Europe. This can be attributed to the increasing awareness of treatment options and general health awareness in these regions, along with the impact of the rising prevalence of related illnesses.

The robust expansion of these markets, however, can also be credited to the presence of established players in these regions, and the ready acceptance of newer technological advances in treatment options. This trend is likely to prevail over the forecast years too, as North America and Europe will continue to remain lucrative markets for players in the global angioplasty balloons market.

However, there has also been a surge in the demand from countries in the APAC region, including India, China, Japan, Australia, and New Zealand, in recent years. APAC is anticipated to be a lucrative market in the global angioplasty balloons landscape during the forecast years, expected to register a CAGR of ~5% throughout 2020 to 2025. This can be primarily credited to the improving healthcare infrastructure and growing spending power of the population in the region.

The fast pace of growth of this regional market can also be attributed to growing consciousness regarding Percutaneous Coronary Intervention (PCI) procedures, coupled with the increasing adoption of cost-effective and minimally-invasive procedures. Manufacturers in the angioplasty balloons market are looking to cash in on this trend, and establish themselves in APAC, to gain a stronger foothold in the global angioplasty balloons market.

The global angioplasty balloons market is segmented based on the balloon type, material, and geography.

This study on the global angioplasty balloons market has product-, material-, and country-specific data, along with market size valuation and forecast price point assessment of the same.

The global angioplasty balloons market is segmented based on the balloon type, material, and geography.

*19 figures and 9 tables includes by FactMR