The global ethylene bis stearamide (EBS) market size is witnessing prolific growth and is expected to expand at a steady CAGR of around 5% from 2021 to 2031, with manufacturers emphasizing on both, natural as well as synthetic amide waxes across prominent industrial application segments. Prominent players are focusing on single-use plastic, amid heightening sustainability concerns associated with their subsequent disposal.

As plastic pollution problems compound, manufacturers are striving to introduce green solutions by manufacturing highly reinforced and recyclable grades, for which, demand for EBS has been inclining significantly in the past. Applications are also abound across the metallurgy segment, as EBS aids in offering enhanced lubricating properties while sintering and metal extraction.Key endusers are likely to continue exhibiting high preference for powdered ethylene bis stearamide owing to its easy application and convenience.

In its new study, consulting firm Fact.MR offers insights about key factors driving demand for ethylene bis stearamide The report tracks global sales of EBS in 20+ high-growth markets, along with analyzing the impact COVID-19 has had on the chemical & materials domain in general, and demand for EBS in particular.

How Do Historical and Future Projections Compare?

The globalethylene bis stearamideindustry has posted credible gains in the past, being valued at over US$ 300 million in 2019, with extensive application across key domains, most notably plastic manufacturing and building& construction.Uptake has also been witnessed across textile and paint manufacturing industries as well.

Growth prospects took a backseat through 2020, as the novel coronavirus pandemic led chemical manufacturers to cease production operations in the initial months. This led to a contraction in demand for EBS across prominent end-use industries. However, as the pandemic’s incidence receded, growth reverted to normalcy.

According to Fact.MR, the global ethylene bis stearamide market is slated to accrue significant gains, expected to be valued at over US$ 500 million by 2030-end, registering a CAGR of approximately 5% throughout the forecast period. Growth is expected to especially peak across the Asia-Pacific, with countries such as India and China offering significant expansion opportunities amid a rapidly expanding construction industry.

Demand for ethylene bis stearamidehas especially surged amid a global increase in plastic production in recent years. For a long time, North America and Europe led the global plastics production. Today, China is the largest producer (25%), followed by Europe (20%) and the US (19.5%). From 2012 to 2017, demand for plastic products rose steadily by about 3.7% annually, with production peaking at 300 million tons in 2013.

Demand is largely stimulated by applications across building & construction, automotive manufacturing, electrical & electronics, textiles, rubber production and a host of other areas.EBSthus helps by acting as a dispersing agent or internal/external lubricant in plastic applications to facilitate and stabilize dispersion of solid compounding materials to enhance processing and reduce friction and abrasion of the polymer surface.

How is Powder Metallurgy Opening Growth Frontiers for EBVS Manufacturers?

Key players in the market for ethylene bis stearamide are enhancing their production capacities to augment production of natural and synthetic amide waxes for deployment across powder metallurgy and cosmetics industries respectively. German manufacturer DEUREX AG’s micronized EBS DEUREX A 2050 M works as an internal lubricant and as a release agent for Sinter and powder metallurgy.

Likewise, ADC Solution offers EBS for use in all types of industries, including powder metallurgy. In order to boost credibility credentials, manufacturers are establishing long-term partnerships to ensure the quality in products. They are setting their collaboration wheels in motion to forge new partnerships to maximize profitability. EBS is being used to improve the main effects of wet spray. This has led to the popularity of ethylene bis stearamide as a dispersant in pigment master batch production.

Mounting global concerns regarding plastic consumption is prompting various industries to adopt more sustainable materials within their supply chain. It is estimated that there are over 5 trillion macro and micro plastic pieces in the oceans, weighing upto 269,000 tons, with 8 million pieces making their way to the environment every day.

Concerned by these trends, manufacturers are relying on more eco-friendly alternatives, mostly derived from natural sources, including wood, bamboo and other materials across such key industries as construction and automotive manufacturing. This is expected to restrict uptake of EBS across several regions in forthcoming years. 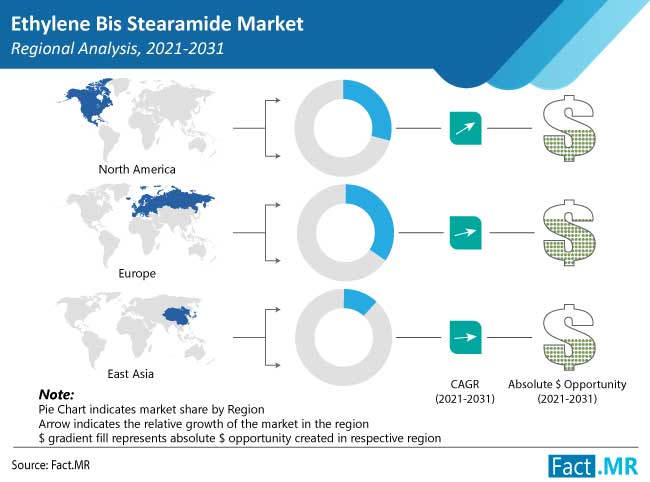 How is Resin Production Bolstering Growth Prospects in the U.S.?

Based on these statistics, a plethora of regional and global level ethylene bis stearamide manufacturers have consolidated their hold across the US market. Some prominent players include ChemCeed LLC, Acme-Hardesty Co., the Chemours Company (DuPont) and Parchem Fine & Specialty Chemicals among others.

Will Demand for EBS Rise across the U.K.?

EBS uptake across the UK is heavily reliant on significant developments across the domestic construction industry. As of the previous decade, the industry contributed over £ 80 million to the economy. After a lull experienced due to the COVID-19 pandemic, output grew by nearly 1% by January 2021, with growth driven by private commercial and infrastructure respectively.

Recent years have seen a massive incline in the building and construction projects being executed across China, amid the increasing need to accommodate the ever expanding population. A report on global skyscraper construction by the Council on Tall Buildings found that China has constructed more supertall buildings exceeding 200 meters in height than the rest of the world combined.

As per the survey, as of 2018, 143 building exceeding 200 meters were constructed globally, with 88 in China. In 2018, the CITIC tower was completed- which stands at 527 meters, being the tallest building across Beijing and the eight tallest in the world. The report revealed that currently over 2,800 projects and nearly 600,000 rooms are in the pipeline.

Hence, the scope for various construction chemicals, including EBS, is increasing tremendously. GreenTech Masterbatches Inc. is a prominent manufacturer of ethylene bus stearamide, which is widely used as a lubricant, viscosity reducer, dispersant and mold release agent for numerous plastics, and production of rubber products.

Why is Plastic Manufacturing the Primary Application Area for EBS?

The plastic manufacturing segment is poised to remain the primary application area for EBS, attributed in large part to the rising demand for various polymers such as PVC, PP, ABS resins, polystyrene, polyolefins, polyamides and polyurethanes for numerous purposes.

Which is the Most Preferred Ethylene Bis Stearamide Form?

By form, powdered ethylene bis stearamide is grabbing major eyeballs. High demand for friction reduction for numerous manufacturing processes is heightening its demand. The powder is especially suitable as an internal and external lubricant, pigment stabilizer and dispersant in the processing of all plastic types.

In addition, it is also used as a release agent and additive to the surface finishing in the production of rubber, as an anti-static agent and anti-foaming agent in paper and textile production and as a modifier in asphalt production to lower temperature at which the asphalt softens.

Prominent market players are reliant on a host of inorganic and organic expansion strategies to cement their presence. Some key strategies deployed include collaborations, acquisitions & mergers and introducing new product lines across prominent regions. Moreover, there is also emphasis on sustainable manufacturing practices.

Global market is expected to surpass a valuation of US$ 500 million, registering a CAGR of around 5% throughout the forecast period lasting from 2021-2031. Growth is majorly underpinned by extensive uptake across plas

Besides plastic manufacturing, prolific opportunities are expected to present themselves across the powder metallurgy and cosmetics segments respectively. In addition, EBS uptake is also high across textile production, inks & coatings and rubber ma

Powdered grade EBS is garnering major traction amid its multiple uses, including demand for friction reduction for numerous manufacturing processes. In addition, it is also used as a release agent and additive to the surface finishing in the production

*49 figures and 166 tables includes by FactMR