A majority of EDC is made at integrated PVC manufacturing facilities. EDC demand is directly correlated with construction activity because of the close relationship to PVC and its wide range of applications in construction.

Demand for EDC is anticipated to expand at the rate of 4-5 percent annually, driven by construction demand for PVC in developing nations and steady, but maturing demand growth in industrialized nations.

With the U.S. being a low-cost supplier of cost-effective ethane from shale-derived natural gas, supply expansion is anticipated to continue. The U.S. produced roughly 27% of the world's total EDC output in 2015, Europe contributed around 30% of the production, and the Asia Pacific region accounted for roughly 20%. In 2017, the U.S. exported 1.35 MMT of EDC, primarily to markets in Asia.

Over the past four years, the global market for ethylene dichloride expanded at a CAGR of 1.1%. Fact.MR, a market research and competitive intelligence provider, predicts the market to exhibit growth at 2.3% CAGR between 2022 and 2032. 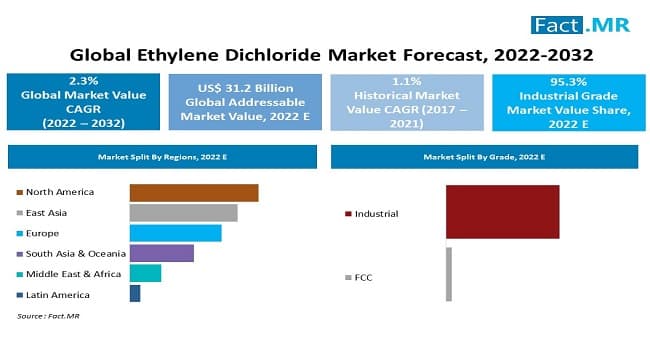 “Plethora of Advantages with Utilization of Ethylene Dichloride”

EDC is a necessary step in the production of fluorinated and chlorinated chemicals. In the textile, metal cleaning, and adhesive sectors, EDC has been employed as a solvent.

Production of chlorinated solvents, including ethylene amines, trichloroethylene, vinylidene chloride, and trichloroethane are other markets for EDC. It functions as a catalyst to produce hexachlorophene and as an intermediary in the creation of perchloroethylene.

An upsurge in the number of manufacturing companies has completely changed the ethylene dichloride market in the last few years. An increase in the volume of the piping sector has also been one of the reasons for ethylene dichloride chemical ventures.

Old and traditional manufacturing processes that have direct chlorination are being replaced by modern, balanced processes for the production of EDC, which is enabling efficient and sustainable manufacturing with the further added benefit of HCL production as a byproduct.

The construction of EDC plants is contemplated as a solution to the absence of domestic EDC requirements. As demand increased, the existing production capacity was not enough to cater to the same, and capacity expansions were the only way to fulfill this increasing requirement for ethylene dichloride.

Will the Huge Piping Sector in the U.S. Drive High Demand for Ethylene Dichloride Valves?

The industry that manufactures plastic pipes has expanded over the past five years leading up to 2021 as a result of rising demand from downstream markets. The main products produced by this sector are plastic pipes and components, which are made by heating resins and feeding them into an extrusion machine. Automobiles, as well as residential and non-residential buildings, widely use industry products.

In the construction of new homes, plastic pipes, particularly polyvinyl chloride (PVC) pipes, are replacing pipes made of other materials such as copper and steel. These PVC or plastic pipes are manufactured using vinyl chloride monomers, which require a high quantity of ethylene dichloride.

Why is the China Ethylene Dichloride Market Expected to Be Lucrative?

China has planned ethylene capacity expansions over the next 3 years after making significant investments in new capacities and expansions over the previous four years. China, the world's top producer and user of polymers and their raw materials, plans to increase the capacity of its new ethylene production facilities by more than 10 million tons by 2025.

Between the years 2018 and 2021, when China's ethylene production soared to 28.26 million tons from 18.62 million tons, Chinese producers inundated the world with nearly 10 million tons of new output.

A hydrocarbon substance called ethylene is used to make ethylene dichloride, polyethylene, ethanol, and ethylene oxide, which is further used for the manufacturing of vinyl chloride monomers, among other things. Eventually, all of these ethylene derivatives are used in several industries.

Large-scale chemical businesses in the nation and well-established traditional industries are the main drivers of demand. At the national level, China is in a dominant position, producing around 52.6% of the ethylene dichloride in East Asia in 2021.

The China market for ethylene dichloride is expected to reach a valuation of US$ 3.9 billion in 2022.

Why is Industrial Grade Ethylene Dichloride Manufactured on a Greater Level?

The most common usage of EDC is to create vinyl chloride, which is then used to create PVC pipes, furniture, automobile parts, wall coverings, car upholstery, and home goods. EDC has also been used in metal cleaning, textile, and adhesive industries as a solvent.

Thus, industrial grade ethylene dichloride has seen increased usage in the recent past, surpassing a market valuation of US$ 29.7 billion in 2021.

Furthermore, with the global economy on the way up, the industrial-grade ethylene dichloride segment is predicted to expand 1.2X by the end of 2032.

How is Balanced Process Ethylene Dichloride Production Shaping Up?

Oxy chlorination and direct chlorination procedures are frequently combined in what is known as the balanced process. EDC is created for use in the production of vinyl chloride and ethylene amines.

In the balanced process, EDC is created through the direct chlorination process, and after being dehydrochlorinated, it produces vinyl chloride monomer and HCl as a byproduct. By employing the byproduct HCl in the oxy chlorination procedure, manufacturers can increase the output of ethylene dichloride.

Given the total benefits, major manufacturers are exclusively concentrating on the new manufacturing process and are expected to experience stronger growth opportunities in the next few years.

The balanced process for manufacturing ethylene dichloride is set to create an absolute $ opportunity of US$ 1.4 billion by the end of the assessment period.

The global ethylene dichloride market is valued at US$ 31.2 billion in 2022.

Worldwide demand for ethylene dichloride is anticipated to reach US$ 39.3 billion by 2032-end.

*199 figures and 56 tables includes by FactMR