Fact.MR predicts that demand for sodium cyanide is projected to growth at a CAGR of over 4% during the forecast period (2019-2027) and is anticipated to reach a value pool of nearly US$ 3 Bn. In recent years the market for sodium cyanide has gained massive momentum owing to rapidly increasing gold prices.

Gold mining companies are investing more capital in new rural exploration ventures, as well as prolonging mining operations that are poised to create value opportunities in the sodium cyanide market. Increasing use of sodium cyanide as an extraction reagent in the mining industry is a primary factor driving growth in the global market for sodium cyanide.

This can be attributed to its economic advantages in gold and silver extraction. The mining and metallurgy segment has maintained its supremacy in the market and is poised to create lucrative growth prospects during the forecast period.

Presently, sodium cyanide is utilized by about 90% of the global gold supply chain. Another factor facilitating growth for sodium cyanide in the purification of metals is the increasing demand for these metals for both commercial and non-commercial operations.

Gold is another metal where the extraction process employs sodium cyanide. Globally, the growing demand for such metals for commercial and non-commercial applications has resulted in increased mining activities.

APAC to Outpace Other Regions, as Mining Activities Intensify

Asia Pacific is presently maintaining its supremacy in the global sodium cyanide market. This area is home to over half the market for sodium cyanide along with China which holds the leading share in the region. Australia also has a significant number of producers of sodium cyanide and the area has shown high demand growth for mining reagents.

Latin America also has a prominent position in the global market for sodium cyanide. Countries like Chile, Peru, and Colombia have shown a surge in demand for mining reagents. Europe is anticipated to show a moderate growth trajectory in the coming years.

With the supply situation changing globally, capacity expansions are projected to increase in several European countries. Hence these regions will become a little less dependent on imports from APAC countries. The market supply gap for sodium cyanide in North America is expected to narrow by the end of the forecast period with demand receiving a steady uptick and supply remaining at an even keel. 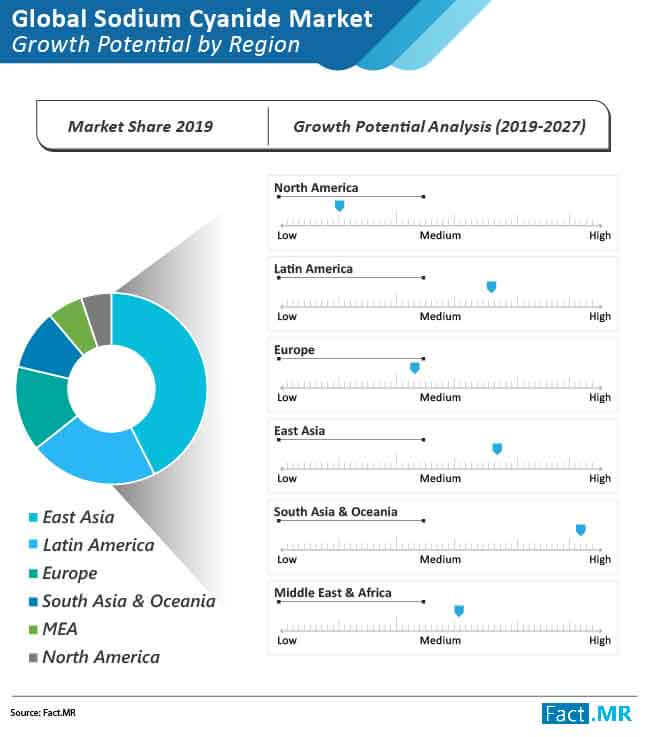 Environmental Concerns to Create a Dip in Supply

The global sodium cyanide market is consolidated in nature with Tier-1 competitors such as Evonik Industries AG, Cyanco, The Chemours Company and Orica capturing a market share of more than 60%. Industry stakeholders are investing in large scale manufacturing to cater to the growing sodium cyanide market.

Competitive bidding is one of the most widely used strategies for supplier selection globally. In recent years, several producers in APAC have gained significant new businesses as a result of their lower prices.

Although demand for sodium cyanide with the recovering mining industry has been steadily increasing globally, the supply side is witnessing environmental inspections causing many plant closures and low operating levels, particularly in China. It is generating supply pressure, and is expected to have an impact on global sodium cyanide prices.

The global sodium cyanide market is segmented on the basis of form, end-use, and region.

This taxonomy and the detailed TOC prepared are confidential and intended exclusively for the individual or entity with whom it is being shared. Reading, disseminating, distributing, or copying this to any party other than addressee(s) is unauthorized and prohibited.

What is the CAGR for sodium cyanide market?

What are the segments covered in the sodium cyanide market report?

The global sodium cyanide market is segmented on the basis of form, end-use, and region.

Chemical tanker market to grow at a steady CAGR during 2019-2027. Production capacity of chemical ma...