Rising development of residential as well as non-residential structures and the requirement of lignosulfonate as an oil additive in the oil & gas industry are predicted to fuel target market growth. In addition, increasing demand for concrete admixtures in the construction industry is also bolstering market expansion.

In recent years, there has been a noticeable increase in the demand for sodium lignosulfonate as a water-reducing agent. This research report by Fact.MR, a market research and competitive intelligence provider, gives a holistic analysis of the global market trends for the forecast period.

Sodium lignosulfonate is mostly used for concrete mixtures as an additive for water-reducing purposes. This chemical is a water-soluble multifunctional polymer that belongs to lignin sulfonate. Further, sodium lignosulfonate has the features of the dispersion of biological slime and oxidizing phosphate scale.

Sodium lignosulfonate forms a stable complex with calcium ions and zinc ions. Two processes are used in the production of sodium lignosulfonate, which include the procedure of pulping with sodium hydroxide and sodium carbonate and further exchanging lignin sulfonate through ion exchange. Further, it has a high water-reducing rate, antimicrobial, low air content, and preservative properties, and can adapt to different kinds of cement.

Sodium lignosulfonate is being used at an increased rate as a plasticizer to make concrete and is an ideal solution for application to building projects and dam projects. In addition, it is used predominately across the construction sector. Moreover, in oil well additives, animal feed binders, gypsum plasterboards, and dust suppressants, these chemicals are used at a significant rate.

On the flip side, the easy availability of several substitutes for sodium lignosulfonate is anticipated to restrain market opportunities. However, untapped potential in emerging markets, increasing requirements for animal feed globally, and advancements in market technologies will offer favorable growth opportunities to market players.

“Increasing Demand for Animal Feed Binders across the World”

Lignosulfonate is used in different complex molecular nutrients that can be decomposed completely and come with a good organic combination. It is helpful for the improvement of the gastrointestinal functions of feed. Lignosulfonate maintains an appropriate balance of beneficial bacteria in the animal body and also promotes feed efficiency.

Sodium lignosulfonate is used as binders for industrial or coke metal powder, concrete admixtures, feed additives, and others. It also finds application in the formulation of oil drilling pulp that is helpful to reduce shear force and mud viscosity to control the mobility of drilling mud.

What Issues Do Manufacturers of Sodium Lignosulfonate Face?

“Availability of Alternatives to Cause Serious Competition”

However, the extensive applications of sodium lignosulfonate, including lead batteries, agricultural chemicals, and gypsum plasterboards are estimated to propel target market growth.

The lack of R&D activities will create certain hindrances to market growth. In the absence of new developments and advancements, stagnancy can prevail in the target market, which can limit the adoption of sodium lignosulfonate. 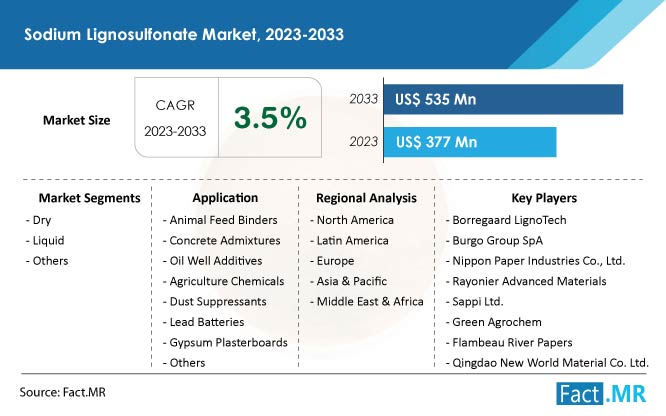 Which Region Leads the Consumption of Sodium Lignosulfonate?

In terms of regions, the Asia Pacific market has been anticipated to grow at a substantial speed during the forecast period. The growth in the regional market is attributed to growing construction expenditure in Japan, China, and India, which can further bolster demand for sodium lignosulfonate.

The North American market is predicted to hold a significant share of the global market due to the presence of numerous mills in the United States that produce animal feed there.

What is the Market Scenario for Sodium Lignosulfonate in Japan?

The Japanese market is anticipated to advance at a sluggish CAGR of 1% through 2033. The market growth is attributed to rapid developments in infrastructure projects in Japan that are estimated to open new avenues for target market growth.

Which is a Lucrative Market for Sodium Lignosulfonate Vendors in North America?

How is the Sodium Lignosulfonate Market in Germany Shaping Up?

Which Type of Sodium Lignosulfonate is Widely Used?

Based on type, the market for sodium lignosulfonate is divided into dry, liquid, and others. Among these, the dry segment is estimated to expand at a CAGR of 3.6% from 2023 to 2033.

Which End-use Application is Poised to Hold a High Industry Share?

Oil well additives are also projected to grow at a noteworthy speed due to their rising use as cement retardants in different oil well additives. Rising oil well exploration activities in the Middle East & Africa and the United States are also accelerating market growth.

The global sodium lignosulfonate market is worth US$ 377 million in 2033.

Consumption of sodium lignosulfonate is expected to increase at a CAGR of 3.5% from 2023 to 2033.

Sales of sodium lignosulfonate are estimated to surpass US$ 535 million by 2033-end.

Demand for sodium lignosulfonate in Canada is set to rise at a CAGR of 2.6%.