The market is likely to grow at a fast pace mainly due to significant demand for cargo boats and ferries for use in offshore and port operations.

According to market research and competitive intelligence provider Fact.MR, the global industrials workboat market is set to create US$ 2.1 billion absolute dollar opportunity between 2022 and 2032. Workboats using diesel as a power source and for port operators are majorly driving market growth.

The industrial workboats market has been broadly categorized based on application type. The offshore energy segment is poised to experience the highest growth rate over the coming years due to endless opportunities for generating more energy.

With the maritime, oil & gas, offshore wind, and maritime energy industries contributing to energy evolution and investments in sustainable solutions, demand for industrial workboats is only expected to rise across the world. 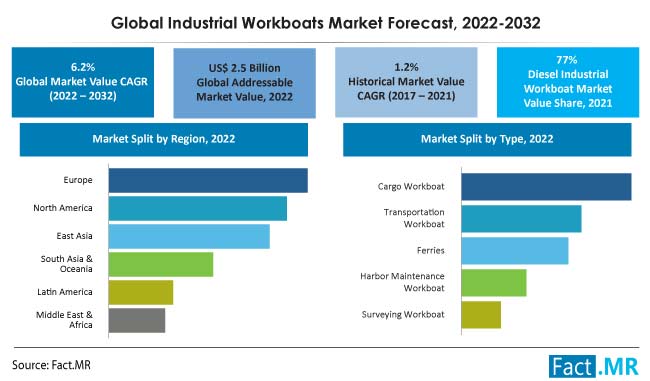 The push to minimize the carbon footprint of global shipping fleets is constant, and it will only get significant in the future. The industry is undergoing fast development, and the hybrid marine market offers commercial potential.

Depending on the size and operational profile, a hybrid workboat can save 40-60% in fuel and emissions. Smaller in-harbor workboats can be powered entirely by electricity, saving 100% on fuel and emitting zero emissions.

Floating offshore wind energy is gaining more and more attention. The growing need to curb emissions has forced countries to embrace renewable energy sources. It has also led to the introduction of renewable solar and wind energy.

Workboats are commonly used for marine construction to provide support for offshore oil & gas platforms, ferries for the transportation of crew members, supplies of equipment, etc. This is one of the major drivers for the market, as industrial workboats are used in the installation process of floating wind power installations.

Workboats are being designed to be as versatile and capable as possible in a single and small container. Market players are providing innovative technology so that they can continue to produce high-quality ships at reasonable prices, allowing them to preserve their market dominance.

As practically every company has good and constant research & development activities on every part of the workboat building process, there is healthy and tough rivalry in the market. Because the workboats market has higher growth potential, there is a lot of competition among leading market competitors.

Will Rising Investments in Maritime Sector in the U.S. Drive Demand for Industrial Workboats?

High penetration in the United States is due to port operators in the country. Ports serve as important transportation hubs that facilitate goods movement. The larger the year-over-year flow of products and passengers, the more infrastructure, provisioning, and related services are required. These will provide varying degrees of economic and national benefits.

Which Country Leads the European Market for Industrial Workboats?

The Germany industrial workboats market is slated to hold 19.3% of the market share in Europe by 2032.

Germany is the third-largest offshore wind energy-producing country. It is focused on making more areas available for development and enabling the production of hydrogen with offshore wind.

Along with this developing infrastructure, the maritime industry is also growing side by side. The German government is also promoting offshore wind, which will anyhow boost the country’s economy. As such, demand growth for industrial workboats is predicted to be high in the country.

Why is Demand for Transportation Workboats High?

Transportation workboats offer better performance and the segment is expected to progress at a high CAGR of 6.9% over the period (2022-2032). In comparison to other forms of transportation, boats have more carrying capacity, allowing them to transport more items in a single journey, considerably boosting their affordability.

Will the Electric Industrial Workboat Trend Get Bigger?

The combustion of heavy fuel oil in huge diesel engines is the primary source of shipping emissions, which disperses contaminants into the air over coastal areas. Because of environmental concerns, demand for electric and hybrid workboats is steadily increasing.

The marine business is expanding as transportation and port operators expand to travel to offshore oil & gas sites, and the usage of electric workboats is expected to increase across regions.

Key manufacturers of industrial workboats are Damen Shipyards Group, Eastern Shipbuilding Group, Hamilton, Daewoo Shipbuilding & Marine Engineering Co. Ltd, and Samsung Heavy Industries. These companies provide innovation and techniques in workboats so that these ships can be reliable and effective for use.

The global industrial workboats market is highly competitive and fragmented owing to the presence of several local and international manufacturers. Marketing strategies such as new product launches, product upgradations, thorough research & development, mergers & acquisitions, and partnerships & collaborations are being adopted by key players.

New product launching is frequently adopted as a strategic approach by companies to expand their presence in the market and gain a wider consumer base.

Global value of the industrial workboats market is US$ 2.4 billion.

Worldwide demand for industrial workboats is set to top US$ 4.6 billion by 2032.