Burgeoning demand of alpha olefins sulfonates in household cleaning, laundry detergents and industrial chemical processing are set to fuel the market during the assessment period (2019-2029).

Owing to its performance attributes and biodegradability, alpha olefin sulfonates are set to become the material of choice in a range of applications. Alpha olefin sulfonate is an anionic surfactant with excellent viscosity and foaming characteristics which offers enhanced detergency and foamability.

Detergents & Liquid Soaps Are Set to Surpass US$ 170 Mn Mark

Detergent & liquid soaps segment has dominated the alpha olefin sulfonates market in 2018 and is set to maintain its supremacy in the market surpassing US$ 170 Mn by 2029. Being an anionic surfactant, it is able to function as detergent, wetting agent and as an emulsifier in broad range of applications.

Alpha olefin sulfonates offer other bundled benefits including high foaming profile and a quick flash foam to produce a stable lather. It also allows personal care products to be offered as preservative-free aqueous solutions, due to which detergent & liquid soaps application is set to remain key consumer of alpha olefin sulfonates in the market. 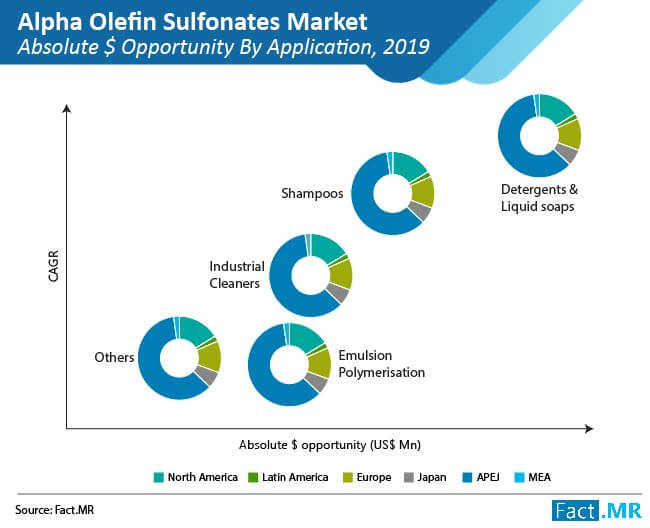 APEJ to Maintain Its Hegemony in Alpha Olefin Sulfonates Market

In terms of value and volume, APEJ is projected to maintain its reign in the alpha olefins sulfonates market and is anticipated to account for more than half of the market share by 2029. China being the leading producer of soaps has supported the regional growth and is forecast to act as a growth lever in the regional market.

However, India is poised to expand at a high growth rate of ~6%, accounting one third of the regional share by 2029. APEJ is followed by North America and Europe, projected to register sluggish growth during the forecast period. United States and Germany are leading soap producing countries and are set to see market growth at an average CAGR of ~2%. 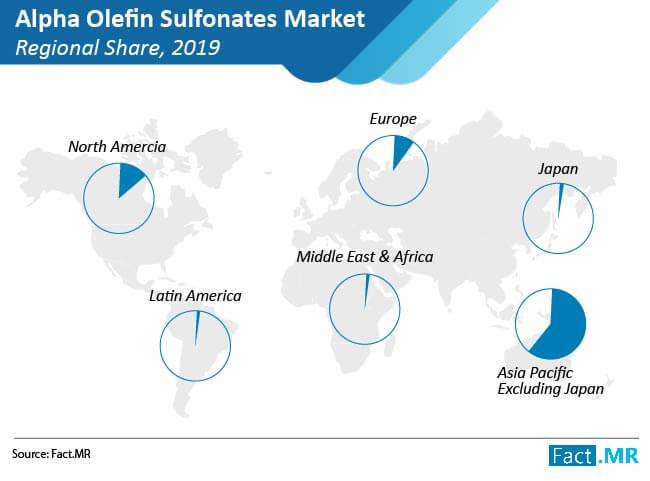 Market players have been offering innovative products to create monopoly in the market in order to maintain and strengthen their position. Additionally, owing to low entry barriers, several regional players have entered the market in the past half-decade.

For instance, in January 2020, Indorama Ventures have acquired Huntsman Corporation’s surfactants businesses for US$ 2 Bn to leverage the remunerative opportunities from the market. Clariant offers alpha olefin sulfonates under brand name of Hostapur OS liq., which is able to produce highly stable micro-foam that is not susceptible to water hardness.

By offering different concentrations of alpha olefin products like 39%, 70%, 80% and 90% alpha olefin sulfonate, Solvay has expanded its range of applications to strengthen its market position.

Similarly, with product BIO-TERGE AS-40, Stepan Company has expanded its reach in numerous applications including personal care applications, agricultural formulations, and construction products which gives significant advantage to Stepan among its competitors.

Fact.MR has segmented the alpha-olefin sulfonates market on the basis of product, application, and region.

“This taxonomy prepared is confidential and intended exclusively for the individual or entity with whom it is being shared. Reading, disseminating, distributing, or copying this to any party other than the addressee(s) is unauthorized and prohibited.”

This newly published report sheds light on vital dynamics, such as drivers, restraints, and opportunities for key market players as well as emerging players associated with the production and supply of alpha olefin sulfonates.

The report primarily conveys a summary of the market, considering the present and upcoming surfactant, detergent and soap industry developments to reveal striking sides relating to the adoption of alpha olefin sulfonates across prominent regional markets.

A detailed assessment of the market supply chain analysis, business execution, and value chain analysis across the regional markets have been provided in the report. A list of prominent companies operating in the alpha olefin sulfonates market enhance the reliability of this comprehensive research study.

Report’s data is based on proven multi-pronged approached, wherein the data pertaining to consumption of AOS by detergent and soap manufacturers has been collected from 22 countries. Simultaneously, overall detergent and soap production data was collated. Apart from these critical data points, a plethora of other insights, statistics and trends were used to derive base year demand as well as simulate likely demand over the coming years.

The study offers an inclusive analysis on diverse features including demand, revenue generation, and sales by key players in the alpha olefin sulfonates market across the globe. A comprehensive study on the market has been done through optimistic and conservative scenarios. The analysis and estimation of price point comparison by region with the global average price has been included in this study.

Existing predictions of the alpha olefin sulfonates market, encompassing current as well as forthcoming values estimates, analysis on region-wise demand trends, and price index have been assimilated in the report.

Country-specific valuation on the demand for alpha olefin sulfonates has been offered for each regional market, along with market scope estimates and forecast, price index, price point assessment, and impact analysis of dynamics in regions and countries. For all regional markets, Y-o-Y growth estimates have also been incorporated in the report.

The report offers the competitive scenario of the alpha olefin sulfonates market, along with profiles of prominent companies contributing to market expansion. Essential and up-to-date data as well as information correlated to market performers, who are principally engaged in the production and supply of alpha olefin sulfonates, have been presented with the help of a detailed dashboard view. The market share analysis and comparison of prominent players provided in the report permit readers to take preemptive steps in advancing their businesses.

The global binding agents market is subject to witness a boost with a crucial CAGR from 2020-2030. W...

Hydroxytyrosol market is anticipated to register around 7% CAGR growth. Cosmetic and dietary supplem...