Globally, the olefin block copolymers market experienced a downfall in demand in 2020 due to the COVID-19 pandemic. However, owing to rising demand followed by increasing olefin block copolymer production, the market again started picking pace since the beginning of 2021. Fact.MR analysed that demand increased 4.1% till September 2021 from the beginning of the Q1 2021.

Rising application of olefin block copolymers in footwear is one of the prominent factor for growing sales during 2016-2020. In terms of value, the footwear segment reached over US$ 89 Mn in 2016, and expanded to US$ 100 Mn in 2020.

Below points summarize the market over the long-run forecast period:

What are the Prominent Driving Factors for Olefin Block Copolymers?

Increasing consumption of thermoplastic elastomers for numerous applications, including automotive, footwear, and consumer goods, has been instrumental in from the past half-decade. Due to superior physical and chemical properties, thermoplastic elastomer is gradually diversifying into industries such as construction and industrial equipment.

Olefin block copolymers are a promising substitute for traditional thermoplastic elastomers and exhibit marvelous application potential in many fields. By looking into the exceptional properties, end-use product manufacturers are already adopting OBCs for better performance and results.

Additionally, numerous applications of OBCs in the automotive industry, film & packaging industry, and other applications such as adhesives, seals and gaskets, profiles & hoses, etc., are reasons behind overall market growth of OBCs, which, in turn, is dominating old thermoplastic use at a certain level. 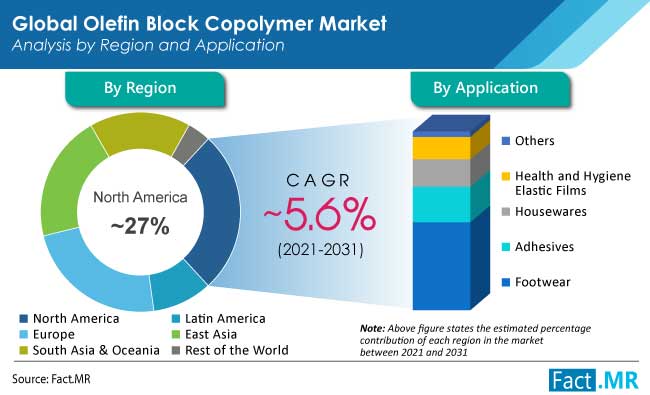 What Makes the U.S. a Prominent Market for Olefin Block Copolymer Suppliers?

Olefin block copolymers were first developed in the United States. DOW Chemical was the company that first found the potential of block copolymers in a different way. The shale gas revolution is also one of the reasons behind the encouragement of developing and producing OBCs at a high volume in the country.  Both, in terms of production and consumption, the U.S. is considered as the largest market for olefin block copolymers.

Over the period of 2016-2020, the United States market expanded at a CAGR 2.6% and reached US$ 41 Mn in 2020. Growing demand for athletic footwear, adhesive applications, and health & hygiene elastic films are driving the requirement for OBCs in the United States.

Why is the Olefin Block Copolymer Business in China Anticipated to Grow at a Much Faster Rate than the Global Average?

China is one of the largest footwear producers across the globe. The footwear industry is one of the significant contributors to the country’s GDP. Thermoplastic elastomers is one of the high demanding material in the Chinese industry.

Growing requirement for quality footwear in the global market encourages Chinese manufacturers to elevate their level of quality production. Footwear manufacturers are looking for better thermoplastic elastomers than existing ones.

Demand for olefin block copolymers in China increased with the shifting mentality of manufacturers. In terms of value, the market in China is anticipated to rise at a CAGR of 6.7% and be valued over US$ 58.6 Mn by 2031-end.

Olefin block copolymers have had great significance in the footwear industry worldwide from the past half-decade. Although a few companies are involved in the production of OBCs, demand has been increasing at a high pace. Block copolymers have enabled the development of athletic shoe midsoles with significantly improved performance.

Growing awareness towards fitness and athletic activities along with increasing involvement in games and sports among people across the globe driving is demand for athletic products, including footwear, fueling requirement for olefin block copolymers.

Why is the Chain Shuttling Catalysis Process of OBC Production the Successful One by Far?

'Chain shuttling catalysis' is the most successful process to produce OBCs. The process was first developed by “Dow Chemical Company”, who came up with various grades of olefin block copolymers in the U.S. market in 2008. Later on, it was exported to several countries across the globe. Over 90% of OBCs produced nowadays are by the chain shuttling catalysis process.

By looking into the demand for olefin block copolymer products, companies across the globe are focused on developing the production technique. Mitsubishi and other companies have developed OBC products using the Ziegler-Natta catalyst system, but haven’t made that much impact in the global market. 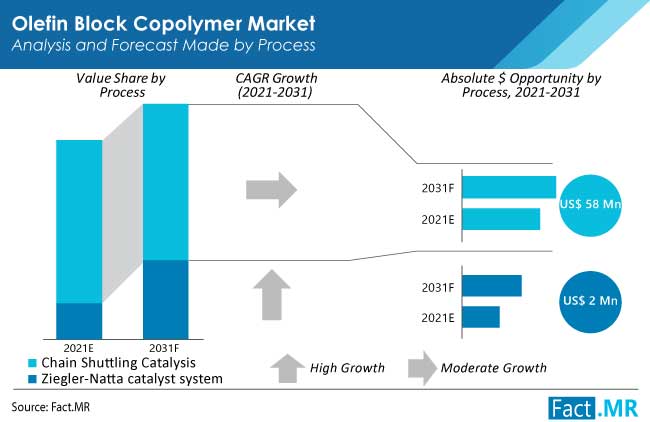 What was the actual consumption of olefin block copolymers in 2020?

In 2020, the olefin block copolymers market surpassed consumption of 94 KT.

What are the sales projections for olefin block copolymers?

What are the latest trends of olefin block copolymers in 2021?

Rising demand for high performance OBCs with high comonomer content is the talk of the town.

What are the primary reasons driving sales of olefin block copolymers?

Rising application in the footwear and adhesive industry and surging demand from niche applications, including 3D printing, are prime reasons driving sales of olefin block copolymers.

How much share do tier-1 manufacturers of olefin block copolymers hold in the market?

Which countries are key demand generators for olefin block copolymers?

How is the North American market performing?

What is the anticipated growth rate for Europe during 2021-31?

What do the sales statistics for Vietnam and India reveal?

The market in Vietnam and India is set to surge at 6.8% and 6.2% CAGRs, respectively, with both countries cumulatively accounting for 63.2% share in the South Asia & Oceania market.

Concrete Floor Coatings Market is predicted to expand at a 6% CAGR through 2031. Epoxy-based concret...