Chelating resins are considered very important for various industrial processes such as separation & purification, wastewater treatment, and electroplating which are predominant factors for the functioning of the chemical industry. Being highly effective in the industrial separation process, the future lookout for chelating resin markets seems promising.

The chelating resins are part of ion exchange resins used for the precise separation of metal particles. These resins have a specific property to bond with metal ions with a functional group to form a complex structure with the metal ion. Owing to this specific attribute, the demand is anticipated to rise in the future.

While considering all these factors, the chelating resins market has experienced a growth rate of 4.1% in (2017-2021) and is estimated to experience a 5.1% of growth rate in the forecast period (2022 - 2032), reports Fact.MR, a market research and competitive intelligence service provider. 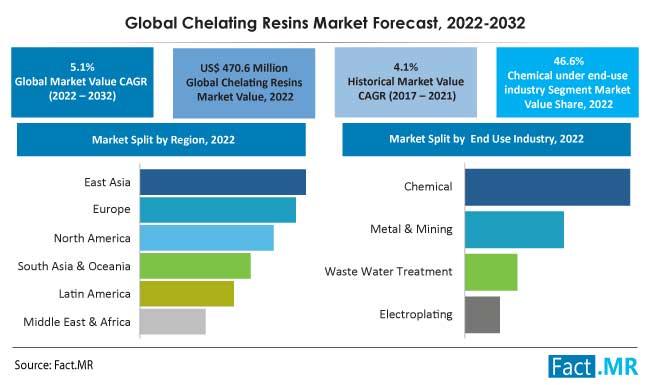 The above image depicts a market share analysis of chelating resins based on region and end-use industry in nutshell. Under the end-use industry segment, chemicals dominate the market with a 46.6% share in 2022

Globally, it has been recognized that heavy metal pollution may be one of the most serious challenges to water as an essential natural resource for all living organisms. Metal recovery from industrial wastewater has been identified as a key market growth area. Chelating resins are a special category of weak cation resins that are very useful in certain heavy metal recovery applications. Wastewater treatment by chelating resin accounts for comparatively less in share in the global market but is expected to gain momentum in upcoming years.

Furthermore, chelating resins are distinguished from the ordinary type of ion exchange resins by being highly selective towards metal ions as well as the combination of the ion exchange and complex chelating functional groups offers solid support for the concentration and/ or separation of trace metals. This specific attribute would demand more consumption of chelating resins in wastewater treatment plants.

With, global gold market capitalization set to be about US$ 2.5-3.0 trillion, gold mining has been a highly profitable business with operations on every continent. Market players investing in the gold business can expect high returns in the future. During the gold extraction process, the presence of copper minerals that are cyanide soluble could present some operational difficulties.

The major advantage of using chelating resins to remove the gold from the pregnant leach solution of copper and gold is to make the process more economic than alternatives like activated carbon. Thus, with the anticipated rise in demand for gold required for various applications such as jewelry or electrical equipment, demand for its production has also increased.

Chelating ion exchange resins had been an area of early interest and are still in the front row of research topics. Resins with an enormous variety of chelating ligands have been synthesized in the laboratory. Essentially any complexing agent used in small-scale analytical chemistry can be coupled to a commercial resin. However, challenges come in obtaining the desired efficiency at a greater scale.

Several new inventions involving separation by chelating resins have been of importance in the last three-four decades. Furthermore, chelating resins also attract a great deal of attention in the field of biochemistry as chelating resin-supporting elements are applicable to the purification of proteins.

Owing to the bulky exchange groups of chelating resins and the discrete stability of the different chelating bonds, the total exchange rate of a chelating resin is limited. All chelating resins are subject to losses and do not operate efficiently at elevated flow rates, as it increases the loss of capacity and metal leakage at this high flow rate.

Further, chelating resins are comparatively costlier than conventional ion exchange materials. They are vulnerable to fouling due to particularly large volume amounts. It is further important to carefully control inlet chemical composition, particularly pH and TDS, and only and probably then, will chelating resins perform to expectations. If the TDS (and hardness) are low enough to permit other ion exchangers to function, then they are likely to be far less expensive to use.

Why does China dominate the market for chelating agents?

Chinese businesses are concentrating on R&D to upgrade technologically and to create the best and most affordable products available in the market. Also operating in its own country provides an edge over other players. China has amazing production capability and a dense network of manufacturers and suppliers.

Rising consumption of chelating resin for improving the efficiency of chlor alkali plants in China results in increased inclination towards the chelating resin.

What will be the future prospects of chelating resins in other regions?

The demand for the application of chelating resin comes from Chlor Alkali, thus it has the bulk of consumption in Asia, Europe & North America where most chlor alkali companies are present.

Chelating resins are expected to be in short supply in North America, which already imports most through Asian nations. Due to the region's extremely high resin prices, the majority of manufacturers have agreements with local distributors for resin procurement.

In spite of having a high demand for chelating resins in Latin America & MEA, these regions are highly import-dependent for the chelating business.

What are the application areas of Chelating Resins?

Chelating resins are widely used in industrial chemical processing. The most demanding end use of chelating resins is chlor alkali processing. The transition of chlor alkali plants from mercury cell to membrane cell technology is popular at the moment due to the significant energy and financial savings. The use of membrane technology in chlor-alkali electrolysis has imposed rigorous controls on the brine's purity.

Ion exchange technologies also have a precise set point that limits alkaline release to a specific concentration, ensuring efficient functioning. Chelating resins are used to control these contaminants without being depleted by sodium. Chelating resins have been shown to be effective at removing hardness from brine streams. So, during the projected period, the demand for chelating resins is expected to fuel market expansion.

In addition to this, chelating resins are widely used in the treatment of effluents and wastewater, which is one of the most rapidly expanding sectors. Over the long-term predicted period, the growth rate would be 4.0% for utilization in the wastewater treatment plant.

The global leading producers of chelating resins are employing for cost optimization. Key suppliers are focused to strengthen market presence as several mid-scaled players from China and India has already captured major client by providing their products at affordable rates. Moreover, forward integration by these manufacturers transforms them into full-service providers, which is expected to shorten value distribution in the supply chain.

Segmentation of the Chelating Resins Market

The application of chelating resins in separation & purification accounts for 31.6% global market share.

Consumption of chelating in wastewater treatment plants accounts for 15.1% of the market share.