North America leads the prefilled syringes market and is expected to contribute more than 35% of the global market growth over the assessment period.

The global market for prefilled syringes has expanded at a CAGR of 9.3% over the last historical period 2017 to 2021.

For patients who need parenteral medication administration on a daily or weekly basis and long-term treatment, the use of prefilled syringes for drug delivery is practical. As a result, they favor self-administered devices as they are no longer reliant on doctors for each dosage.

Additionally, prefilled syringes have become more popular owning to packaging technology developments in the pharmaceutical and healthcare industries. Regulatory authorities are authorizing a variety of syringe designs as stakeholders strive for efficiency in drug delivery and distribution, though only after taking administration safety into account.

Over the 2017-2021 historical period, the global prefilled syringes market registered a CAGR of 9.3%, and according to the Fact.MR, a market research and competitive intelligence provider, the market is projected to exhibit growth at 10.0% CAGR between 2022 and 2032. 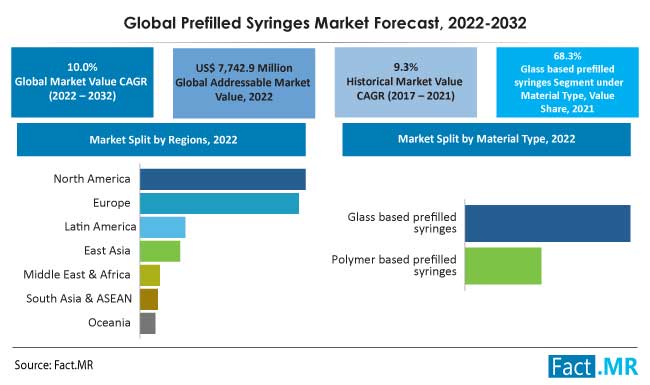 “Preference for Self-Administrable Devices Will Drive the Revenue Market Share”

Due to the increase in chronic and lifestyle diseases around the world, the prefilled syringes industry has experienced substantial expansion. Saline syringes are one type of self-injection device that are in high demand due to its user-friendliness and security. According to an estimate by Fact.MR, 540 million individuals (20-79 years old) already have diabetes, and that number is projected to rise to 783 million by the year 2045. Type 1 diabetes affects more than 1.1 million children and teenagers worldwide.

Pharmaceutical businesses have been able to decrease drug waste while also extending the life of their products due to the widespread use of prefilled syringes. Prefilled syringes are seen to be the ideal way to store pharmaceuticals since they encourage self-administration, cut down on overfill waste, and lessen the chance of misuse.

In equal measure, this helps patients, medical professionals, and manufacturers. These syringes are prefilled, which eliminates the need for nurses or patients to prepare and draw medication into the needle because the appropriate dosage is already present in the barrel and ready for injection.

When compared to vials, this leaves less room for preparation and dosage mistakes and allows for a more effective drug delivery system. All these aforesaid elements are giving a good growth traction to the target product market.

What Do Prefilled Syringes Manufacturers Need to Watch Out for?

Prefilled syringes, for example, do not always adhere to the standards set by regulatory agencies for combination products. The strict regulations on certain products may make it difficult to introduce the product. The target product market may also be hampered by a few common problems with glass syringes, such as inability to distribute the medication or breaking of the needle connector.

In order to achieve the standards for formulations and to provide their customers with safe and high-quality products, producers must spend in R&D.

How big is the Opportunity for Prefilled Syringes Market in the U.S.?

The United States prefilled syringes is currently estimated at US$ 1,839.1 Million.

During the projection era, it is anticipated that the United States will remain one of the most alluring regions for the target market. due to a surge in pharmaceutical company and research lab R&D activity, as well as government initiatives for various immunization programs. In addition, the growing use of safety prefilled syringes and the focus on preventing needlestick injuries are anticipated to propel the prefilled syringes market in country.

The high healthcare spending in the United States is also one of the other major factors propelling the market's rise. The estimate found that total healthcare spending jet to US$ 4.3 trillion in 2021, outpacing the 4.0% GDP growth of the US economy as a whole.

Owing to the above-stated reasons, the United States holds significant potential for prefilled syringes sales over the coming years.

What is Driving Prefilled Syringes Sales in Asia Pacific Market?

Due to the rise in diabetes, infectious diseases, and cancer, the market in Asia Pacific is expanding quickly. This is fueling demand for particular therapies, which in turn is increasing demand for prefilled syringes. The prefilled syringes market in Asia Pacific is also being driven by regional product launches, technical developments, and improved reimbursement practices. In additions, the region's market is also being driven by the China’s government health care reforms, a favorable regulatory environment, increased pharmaceutical development, an ageing population, healthcare advances, and the existence of the nation's highest percentage of diabetes patients.

Hence, the China market for prefilled syringes is expected to reach a valuation of US$ 271.1 Million by the end of 2022.

Which is the Leading Material Type of Prefilled Syringes Market?

Prefilled glass syringes are anticipated to continue to be the most popular during the projection period. A growth in demand for glass-based prefilled syringes is anticipated over the coming years as a result of their numerous benefits. High compatibility, high stability, and prevention of medication contact with oxygen or water vapor are all features of glass prefilled syringes.

Why Prefilled Syringes Are Preferred More in Hospitals?

Producing sustainable products that improve safety and efficiency while reducing waste, energy use, and environmental effects is the primary goal of the companies competing in the market. The dominant players in the industry are also developing strategic alliances and collaborations with rival businesses in order to improve and strengthen their regional presence in the global market.

Worldwide demand for prefilled syringes is anticipated to reach US$ 20,167.8 Million by 2032-end.