Dual chamber prefilled syringes are being widely utilized for storing biological substances or active pharmaceutical components that cannot be stable for extended duration.

These syringes enable avoiding drug loss by maintaining sterility of drugs prior to injection.

Advancement in technology has resulted into improved arrangement of liquid components in syringes and injectors, attracting more patients toward opting for these safe and efficient syringes.

Lyophilized drugs have witnessed a robust penetration across the globe in the recent past. These drugs account for a major share of the all reconstitution-requiring injectable/infusible.

As a large number of injectable/infusible drugs have been developed for self-administration, special challenges are incurred for the drug developers.

However, dual chamber prefilled syringes, which are particularly designed for simplifying reconstitution devoid of patient handling of diluent or drug, have become the mainstay option for delivering these drugs, meanwhile curtailing challenges faced by developers. 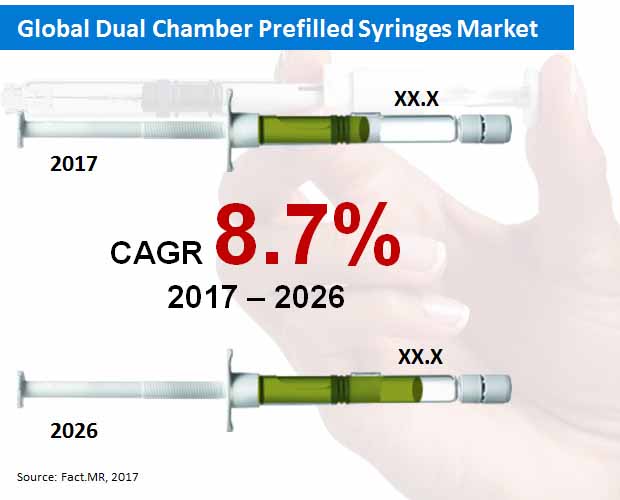 A CAGR of 8.7% has been projected for the global dual chamber prefilled syringes market during the forecast period, 2017 to 2026, according to a new study of Fact.MR.

Roughly US$ 3,300 Mn worth of dual chamber prefilled syringes are likely to be sold across the globe by 2026-end.

North America will continue to be the most remunerative market for dual chamber prefilled syringes.

Dominance of North America in the market can be highly attributed to growing prevalence of chronic diseases in the region coupled with high penetration of biologics and biosimilars.

Geographical expansion of North America-based market players, high demand for self-injection devices and growing geriatric population are some other factors driving growth of the market in North America.

This can be attributed to factors such as relatively lower cost along with robust adoption of self-administered drugs.

Glass will remain preferred product material for dual chamber prefilled syringes, mainly because of its non-reactive nature, and properties such as chemical and heat resistance.

Although hospital pharmacies are estimated to account for the largest market share during the forecast period, sales of dual chamber prefilled syringes in online pharmacies are poised to record the highest CAGR through 2026.

With trend toward surging adoption of self-injection syringes, and development of technologically advanced dual chamber prefilled syringes, leading players in the market are concentrating on expansion of their product portfolio and the market reach.

In this highly competitive and rapidly evolving market, players are emphasizing on the essentiality of up-to-date information for monitoring their performance and making critical decisions regarding profitability & growth.

Some players in the market are also focusing on making improvements in design of dual chamber prefilled syringes for improving stability and safety of sensitive drugs.

Fact.MR’s report has listed key players augmenting the market expansion, which include

Patient temperature management systems market is anticipated to record nearly US$ 2,860 Million and ...

Polysaccharide Hemostatic System market is set to witness steady growth during 2021-2031, owing to a...