Sales of syringes & cannulas accounted for more than 2% share of the global medical devices market at the end of 2021.

Syringes and cannulas have undergone significant technological advancements over the years. Developments related to disposable syringes, the use of multi-chamber syringes, the advent of products with needle-stick safety features, and other such advancements have raised the demand for these products globally.

The inevitable need for syringes and cannulas in almost all primary diagnoses and treatment and care has amplified the market at a compound annual growth rate of 3.8% from 2022 to 2032.

The prime issue of needle-stick injuries is being extensively addressed by the development of various safety measures such as passive needle guards with a plastic shield and improved retractable needle systems. Innovations in the field are targeted to address the dual issues of accidental needle stick injury and reuse.

Additionally, the rising prevalence of contagious and infectious diseases is predicted to increase demand for both, disposable and reusable syringes. Syringe and cannula sales will further increase as a result of the large rise in immunization campaigns organized by governmental and non-governmental groups.

Under the influence of these factors, the syringes and cannulas market is expected to offer an absolute $ opportunity of US$ 8.9 billion from 2022 to 2032.

Over the 2017-2021 period, the global market for syringes and cannulas registered a CAGR of 3.8%, and according to Fact.MR, a market research and competitive intelligence provider, it is projected to expand at 3.6% CAGR between 2022 and 2032. 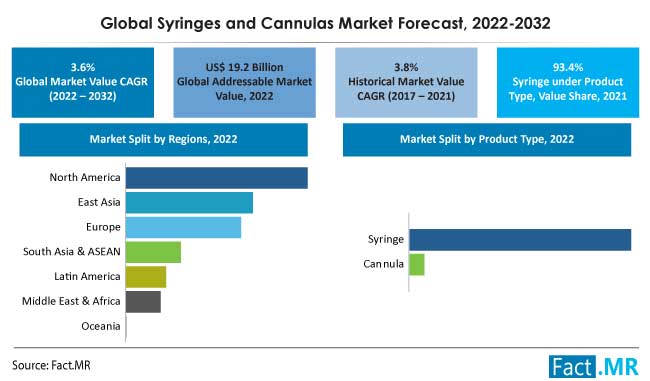 Which Factors are Driving the Demand for Syringe and Cannulas?

“Increasing Use of Smart Syringes in Various Treatments”

To assist nations in addressing the problem of improper injections, which contributed to the global spread of several lethal infectious illnesses, WHO created a policy on injection safety. The spread of needle-based, contact-induced infections has been improved with the introduction of modern equipment, such as the innovative "smart syringes" for injection into the muscles and skin, consequently increasing the use of smart syringes globally.

The smart syringe has features like a metal clip to stop the plunger and a weak spot in the plunger. The syringe can also retract inside the syringe barrel in some models. These characteristics lead to the incorporation of the components that prevent the reuse of smart syringes. It is projected that these developments will lead to an even greater rise in demand for syringes and cannulas in the coming years.

“Market Growth Being Shaped With Increase in Number of Manufacturers”

Increasing number of lethal diseases, demands advancements in diagnostic and treatment in the healthcare and prevention market, which has gravitated manufacturers towards medical device production.

Syringes and cannulas are being used more often across the board in the healthcare sector. There is a greater chance for emerging manufacturers to enter the market and gain significant revenue by manufacturing syringes and cannulas because of their low production costs and higher benefits.

Additionally, manufacturing processes and approvals for producing cannulas and syringes is way simpler than any other medical devices. The occurrence of numerous global and regional companies has fragmented the syringe and cannulas market due to which, the market is continually being driven by key competitors' efforts to embrace strategic developments and introduce new goods.

What Must Syringe and Cannula Manufacturers Be Aware Of?

Nearly 150 tons of medical waste is produced daily in Gulf nations. Small-scale incineration or landfilling are the only options for waste management. These behaviors affect other important factors like water availability, soil fertility, air quality, and others.

As the use of reusable syringes and cannulas increases and the amount of medical waste produced by single-use goods rises, this problem is anticipated to impede market growth.

According to Fact.MR, North America is the most lucrative region for the syringe and cannula industry.

With more and more significant participants in the country, the United States is a significant contributor to the North American market. Syringes and cannulas are frequently approved and put on the market in the United States, which generates over 90% of the region's revenue.

The U.S. FDA's tough regulations against the reuse of single-use syringes also signal lucrative growth for the nation. Additionally, a developed healthcare infrastructure has encouraged many patients to go to the nation for complicated treatments, supporting market expansion.

How is Rising HIV Prevalence in GCC Nations Affecting the Demand for Syringes and Cannulas?

In the GCC, the prevalence of HIV infection is rising at an alarming rate. These nations have a generally higher rate of HIV pervasiveness than other areas. A significant global public health problem is still HIV. The World Health Organization (WHO) estimates that there are more than 38 million HIV-positive individuals worldwide.

Despite this rising prevalence, numerous initiatives are made to raise the rate at which HIV is treated. However, there has been an increase in the number of diagnoses and treatments in the area, which is encouraging the syringe and cannula demand.

Additionally, GCC countries held 47.4% cumulative share of the Middle East and Africa market in 2021 and are expected to continue expanding rapidly over the projection period. The country's increasing rate of needle stick injuries and the risk of syringe reuse is further driving demand.

Over the following forecast period, syringes will continue to have more than 90% of the market share because of their significant use in immunization and IV drug delivery mechanisms. The removal or supply of fluids, as well as the collection of bodily samples, are only a few of the uses of cannulas.

Syringes are increasingly used frequently by medical experts because of their benefits, which include quick and simple usage, the ability to specify the total volume of fluid, and medicine delivery at a precise speed.

As a result, the market integration of the syringe segment has grown significantly in recent years, exceeding a market worth of US$ 17.1 billion in 2021. Additionally, it is anticipated that the segment will grow 1.5X by the end of 2032.

For a variety of end users, top syringe and cannula manufacturers are applying sustainable technology and optimization techniques. Moreover, the core marketing strategy of manufacturers is built on their professionalism and ability in organizing, creating, and delivering the best solutions. Market players are also aiming to make products available through geographical expansion in emerging and low-income countries.

The global syringes and cannulas market is valued at US$ 19.1 billion in 2022.

Sales of syringes and cannulas are anticipated to reach US$ 27.2 billion by 2032.

*108 figures and 64 tables includes by FactMR