Global cooking oil market is projected to expand at a value CAGR of 5.5% during the period of assessment (2017-2026). Also, Fact.MR analysis has revealed that the volume sales of cooking oils is estimated to surpass 250,000,000 tons by the end of the year of assessment (2026).

With increasing awareness regarding various lifestyle diseases such as diabetes, high cholesterol and obesity, health and fitness has gained high focus among individuals.

They are becoming more aware regarding use of appropriate quantity of cooking oils. With this fact in focus, manufacturers have been producing cooking oils with high nutrient value and less fatty matter.

Increasing incidences of cardiovascular diseases across the globe has prompted individuals to consume health cooking oils.

For example, in United States, around 610,000 people die owing to heart disorders every year (According to American Health Association).

Ever since, scientists have researched upon best cooking oils for consumption. This is likely to impact the growth of the cooking oil market during the assessment period. 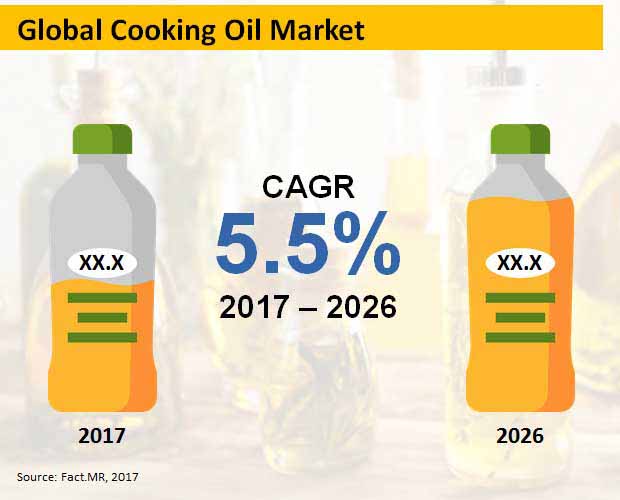 According to Fact.MR, the sales of cooking oils are expected to increase at a steady pace during the forecast period.

Health advantages associated with the consumption of various vegetable oils such as olive oil, coconut oil and canola oil is expected to influence the sales of cooking oils.

For example, Avnash Industries Ghana Ltd., has introduced Lafia cooking oil that is rich in nutrients and is a refined form of palm oil fortified with Vitamin A.

Other key participants profiled in this research report include

Sales of cooking oil across various regions in the globe has been significantly increasing since the past several years.

However, emerging economies in the Asia Pacific excluding Japan (APEJ) region are expected to largely contribute to the growth of the cooking oil market.

This is mainly driven by increasing population growth across countries in Asia Pacific excluding Japan (APEJ), especially China and India that are highly populated (Chinese population in 2017 was 1,409,517,397 and has touched 1,415,045,928 in the first four months of 2018 and is still growing).

Moreover, governments in these regions are supporting the development of healthy cooking oils, considering the increasing health disorders and chronic diseases.

In China, rates of chronic diseases is on the higher side with high expenses on medications.

With growing domestic demand for cooking oils in the APEJ region, the sales of cooking oil in this region is expected to grow exponentially to reach a significant value by the end of the year of assessment.

APEJ is expected to reflect high market attractiveness for cooking oils during the assessment period.

Moreover, another factor contributing to the increasing sales of cooking oils is the channel of distribution preferred by manufactures.

Apart from convenience stores, or supermarkets and hypermarkets, distributors of cooking oil are using online sales channel to enhance their reach consequently improving the sales of cooking oils.

People can avail lucrative discounts and promotional offers on various cooking oil brands. This has accelerated the growth in sales of cooking oils across regions.

The global market is segmented on the basis of Region, Fuel, Category, Nature and Sales Channel.

The global market is poised to expand at a CAGR of 5.5% by the end of forecast period.