The market is also marked by merger and acquisition activities that assist market players to strengthen their global market position. Despite at the budding stage, e-commerce and digital media platforms are considered as the upcoming sales channels that can enhance product exposure and increase the number of sales. The direct sales segment in sales channel is expected to hold a market share of 26% by the end of 2032 with a growth rate of 4.0%.

How failure of cooling in humid weather to act as an industry challenge over air conditioner?

Evaporative air coolers work at their highest efficiency in hot and dry climate and are suitable for hot summers in sub-tropical regions. However, in the conditions of increased humidity, evaporative cooling principle proves inefficient.

On account of which, consumers with higher purchasing power prefer air conditioners over evaporative air coolers for better cooling solution in altering levels of temperature and humidity. Thus, the market is likely to witness staggering growth in major economic countries where energy efficient air conditioners remain a preferred choice.

How rising adoption of sustainable consumer coolers is acting as opportunity?

CFC gas released by air conditioners have increased concentrations of hazardous greenhouse gases in the air that are responsible for global warming. To address the intensifying effects of global warming, world countries have signed international treaties and are adopting sustainable approaches in every area possible including construction and electronic appliances.

In addition, air coolers can be used for both indoor as well as outdoor applications, whereas, an air conditioner proves ineffective in outdoor spaces. As adoption of sustainable approaches intensifies and novel technologies are implemented in the design of evaporative air coolers, the market has future growth opportunities during the forecast period.

How rental based program is driving the demand for evaporative air coolers?

The market is persistently evolving due to implementation of innovations that promote energy-saving, cost-efficiency, as well as responsibility towards environment. Smarter consumers are not only comparing overall product cost but also checking technological efficiency and its cost.

Due to technological advances, overall cost of technology implementation has declined significantly over the past decade, making advanced technologies available for consumers at low cost. Alternative cooling technologies have emerged at lower rates and are averting consumers from adopting evaporative air coolers. In addition, evaporative air cooler has bulky appearance and poor aesthetic that does not fit in the infrastructures with modern design. Thus, lower cost alternatives with enhanced aesthetic can hamper the growth of the market during the review period.

What are the driving factors of evaporative air coolers in China?

Significant climate change and temperature rise in China as well as other East Asian countries have impacted life styles of the population. This has necessitated the adoption of cooling systems by both residential as well as commercial sectors.

Rising global temperature due to global warming has intensified the sales of cooling appliances worldwide and is expected to rise by almost two fold by 2050. According to the estimations of the University of Birmingham, rise in energy usage will be prominently influenced by adoption levels in China and other hotter countries. By 2032, China is expected to hold more than 50% of market share in East Asia region.

Why India is a pivot point for evaporative air coolers manufacturers?

India is expected to grow at a CAGR of 4.2% by the end of 2032. Domestic manufacturers in India such as Symphony, Khaitan, Orient, Crompton Greaves, Voltas, and Bajaj among others dominate the local market and are expanding their geographical presence in the international market as well. 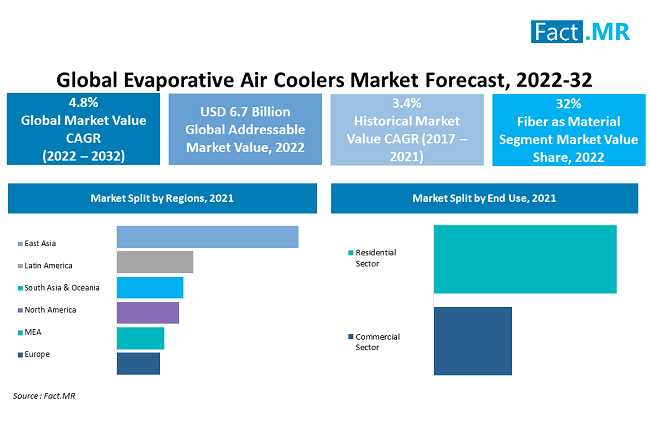 How demand from commercial sector is slated to remain prominent?

The global focus on sustainability has resulted in the adoption of green products and green energy solutions across various commercial establishments especially in the developed countries like U.S. Top manufacturers and suppliers of evaporative air coolers are increasing their production capacity to cater to the rising demand from other sectors.

The groceries and general merchandise sector showcases increased demand for energy efficient air cooling systems and the adoption of evaporative air coolers in this sector has witnessed a spur in the global market in the last few years. However, commercial sector is expected to be valued at USD 4.6 Bn by the end of 2032.

Under product type which segment is likely to witness accelerated growth?

Owing to using low power and therefore being environment friendly, the demand for portable air coolers will see an immense growth of 4.4% over the forecast period.

Such coolers make use of cloths drenched in water to make the cool environment. The portable cooler is expected to reach a valuation of USD 3.7 Bn by the end of 2032.

The market is likely to grow at the rate of 4.8% CAGR during the estimated period.

The market is likely to offer an absolute dollar opportunity of around USD 4.2 Bn during 2022-2032.

East Asia holds the leading market share of around 38% in 2022 and presumed to remain in same growth curve by the end of 2032.

Portable cooler segment as product type have the highest market share of 36% in 2022.

North America region is likely to offer great growth prospect with a market valuation of USD 880 Mn in 2022.

*277 figures and 98 tables includes by FactMR