As the fitness industry continues to consolidate and mature, with prominent fitness equipment manufacturers vying for dais positions, functional fitness training equipment is bid to gain increased traction in the forthcoming years.

With continuous rise in the obesity and cardiovascular disease epidemic, functional training – a latest trend in the fitness industry – is likely to play an integral role in improving health of individuals, alongside increasing awareness about following healthy lifestyle.

Various non-profit organizations, such as the USA Functional Fitness (USAFF) have been focusing on the promotion of functional training via spreading awareness on its inherent benefits through championship initiatives.

Growth of the functional fitness equipment market will significantly remain influenced by the aforementioned instances. 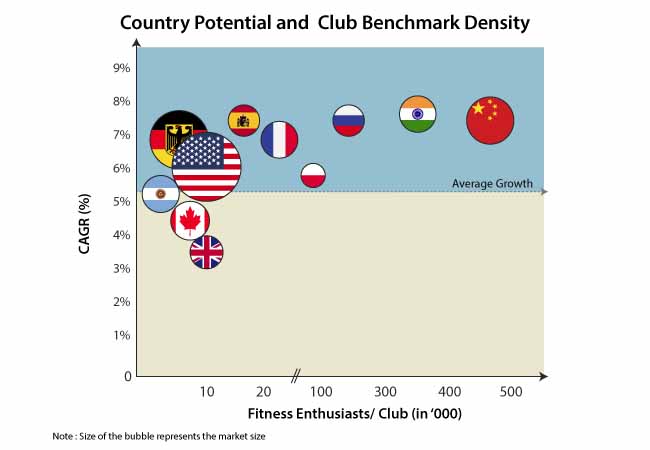 A recent Fact.MR report foresees the functional fitness equipment market to present an impressive growth during the period of forecast (2018-2028).

With Millennials increasingly driving the consumer spending, offering services appealing to their values is being considered crucial among industrial sectors, and the fitness industry is no exception.

A recent survey has found over four-fifth percentile of Millennial population adhere to daily exercise, as opposed to that of just above three-fifth of Baby Boomers.

For Millennials, health & wellness is an active, daily pursuit, with their focus being robust with regard to exercise, and healthy diet.

This generation is smoking less than its predecessors. Fitness is one area where Millennials are willing to spend more on compelling brands. In addition, the trend of functional training is highly underpinned by the Millennials.

Nevertheless, other demographic segments are not being neglected, when it comes to development of functional fitness equipment, as the actively-aging Baby Boomers population is also deemed as a lucrative area for growth.

Although most athletes prefer standard-sized bars, some feature ones with smaller diameter.

Smaller diameter bars particularly seek used among the female fitness enthusiasts, of whom participation rates have witness significant proliferation in the recent past.

Functional training workout activities frequently feature plates of 65 lbs for women and 95 lbs for men, which has driven the demand for these bars & plates variants.

Bars & plates are likely to remain sought-after among end-users of functional fitness equipment, with kettlebells & dumbbells following the suit.

With rising traction of progressive kettlebell & dumbbells workouts, these functional fitness equipment are witnessing huge demand as they serve the purpose of adding weight to the exercise movement patterns.

Rowing machine has recently witnessed a rise in popularity as a combination machine, which combines cardiovascular elements and muscle building resistance.

Easy-on-joints and low impact attributes of rowing machines have led their interest among older fitness enthusiasts.

This humble rowing machine that long gathered dust in corners of gyms, has been experiencing a renaissance over the recent past, being dubbed as “the new spinning”.

The report envisages fastest revenue growth for rowing machines through the forecast period.

While indoor rowing machine is likened to the equipment that ply their trade on water, past few years have demonstrated rowing machine’s popularity surge as an alternative to static bikes and treadmills in gyms.

This will significantly impact growth of the functional fitness equipment market in the long run.

Although increased efforts are being health organizations and medical institutes to spread awareness on leading healthier lifestyle, a significant chunk of population is observed to be irregular w.r.t their consumption patterns and fitness activities.

For example, nearly three-fourth population in India fail to exercise, with approximately two-third of them not monitoring their diet.

Such unawareness and ignorance toward health among populations in emerging economies and underdeveloped nations will continue to inhibit demand for fitness equipment, thereby curbing growth of the functional fitness equipment market.

This is mainly because functional fitness equipment are economically viable for companies, compared to their gym and health club employed counterparts.

There is high potential for corporate fitness management in enhancing productivity of employees via boosting their morale while improving the overall wellness of the workplace environment.

This will further pave immense growth opportunities for the functional fitness equipment market in the foreseeable future.

Xfit Brands, Brunswick, Total Gym Global are some of the key players in global market.

The global market is segmented by product type, by application and by regions.

*77 figures and 83 tables includes by FactMR