Worldwide sales of coconut oil are forecasted to increase at a CAGR of 5.2% from 2022 to 2032. Currently, the global coconut oil market is valued at US$ 5.7 billion and is anticipated to reach a market size of US$ 9.5 billion by the end of 2032.

Coconut oil is a type of edible oil derived from the meat or kernel of mature coconuts. It is widely used in cosmetics, industrial, and food products. Since coconut oil is high in saturated fats, it is resistant to oxidation and spoilage. This gives it long shelf life, making it perfect for use in tropical conditions.

Coconut oil is extensively used as an ingredient in a variety of industries, including cosmetics, food and beverages, pharmaceuticals, and personal care. With the constant growth of these end-use sectors, the demand for coconut oil has increased in recent years. Furthermore, the growing popularity of plant-based personal care and cosmetics is hastening the manufacturing and processing of coconut oil in major coconut-producing nations.

Numerous coconut associations, including the Indonesian Coconut Processing Industry Association, the Virgin Coconut Oil Producers Association (VCOPA), the International Coconut Community, and the Coconut Development Board, have been founded in several nations to oversee industry activities. These organizations are mainly responsible for supervising coconut export, trade, processing, and cultivation throughout their respective countries.

However, the global coconut oil market is expected to experience a few challenges during the forecast period. The war between Russia and Ukraine has had a substantial impact on the trading of coconut oil.

Many coconut oil manufacturers are prudently abandoning the conventional business model and capitalizing on evolving statistics. The goal of this change is to boost productivity and focus on great opportunities. With the growing worldwide craze for high-value items such as virgin coconut oil as a functional cooking oil, producers are ramping up production to achieve large profit margins.

Furthermore, with the emergence of the eco-innovation trend, major market players are rapidly embracing sustainable ways to create high-quality products that are in sync with environmental wellness.

Coconut oil has been viewed as a healthy element for beauty improvement by communities worldwide, particularly in coastal and tropical countries, influencing manufacturers to employ coconut oil as a basic component in personal care and cosmetic products.

Furthermore, the antibacterial characteristics of lauric acid in coconut oil have made it a popular ingredient in shampoos, lip balms, moisturizers, and soaps in the past few years. Coconut oil is an excellent natural moisturizer. It holds moisture and makes lips soft. As a result, producers are using coconut oil in their lip care items.

Such aspects are anticipated to raise the sales of coconut oil during the forecast period.

“Emerging Use of Coconut Oil as Potential Biofuel”

The fuel crisis and growing societal worries about the depletion of nonrenewable energy resources have prompted a search for alternate solutions. Several initiatives have been launched to generate energy from alternate sources such as solar and biological sources.

Biofuels are in high demand due to their environmentally friendly nature. Coconut oil blends produce energy that is highly equivalent to conventional diesel, and its exhaust includes significantly fewer dangerous emissions than normal diesel exhaust.

In addition, due to its lower local cost, coconut oil is widely employed in transportation and electricity generation in Pacific countries, boosting demand for coconut oil. 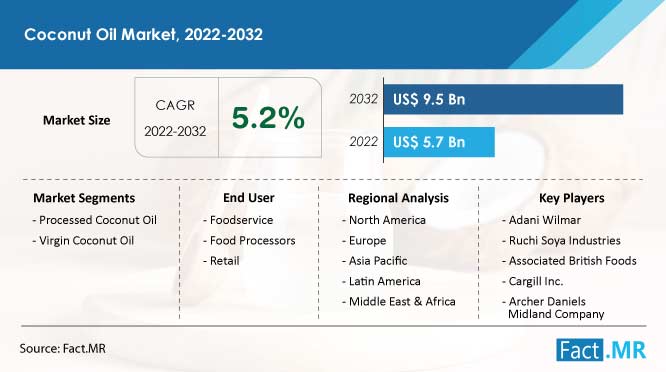 How is Japan Aiding Market Growth in Asia Pacific?

The Japanese government is encouraging the development of coconut oil processing capacity to meet growing demands in a variety of application industries.

Why is the United States a Prominent Market for Coconut Oil Producers?

The North American market is likely to witness substantial growth during the forecast period. The United States is North America's largest market for coconut oil.

The country has a significant Hispanic population, who typically utilize coconut oil in cooking. Furthermore, the health advantages of coconut oil are becoming more popular in the country. The availability of virgin and organic coconut oils is also propelling the market in the United States.

What is Germany’s Position in the European Market?

Demand for coconut oil in Europe has grown considerably in recent years as consumer awareness of better diets has risen. Moreover, its usage in a variety of industrial items such as food and beverages, pharmaceuticals, and cosmetics is expanding.

In addition, the health and wellness trend in European countries such as Germany, France, and Spain is expected to raise the sales of coconut oil in the region.

Germany is projected to make substantial contributions to the regional market during the forecast period. This is due to the growing usage of coconut oil to manufacture healthy bakery and ready-to-eat products.

What Makes Virgin Coconut Oil the Most Popular Type?

Global sales of virgin coconut oil are projected to climb at a CAGR of 7% during the forecast period. Virgin coconut oil (VCO) is produced from fresh coconut meat or derivatives that have been naturally processed without the use of chemicals or additions. Due to its low level of peroxide value and free fatty acids, it is the purest type of coconut oil, carrying natural vitamin E and without undergoing any atmospheric or hydrolytic oxidation.

Virgin coconut oil is high in healthy fatty acids, antioxidants, minerals, and vitamins. The product type is growing in popularity as a nutraceutical ingredient and among health-fanatic consumers worldwide.

The worldwide market for coconut oil is extremely competitive, with prominent players pursuing various strategies like capacity growth, product development, and investment in sophisticated processing technologies. In addition, market players are concentrating on mergers and acquisitions to expand their presence in the global market.

Rising awareness about the cosmetic and health benefits of coconut oil is a major factor driving market growth.

Virgin coconut oil is the leading product type in the global market.

*66 figures and 219 tables includes by FactMR