The top three manufacturers of canola oil are Bunge, ADM, and Louis Dreyfus Company, who are together likely to hold around 31% share of the global market by the end of 2032.

Canola oil is generally extracted from rapeseed that belongs to the Brassicaceae family of plants. This oil is an edible product consumed by people across the world. The benefits of canola oil are enormous due to its roots in the family of health-promoting plants. Canola oil is also well-known for its source, Brassica Napus, which is considered one of the prominent oilseed crops cultivated around the world.

Canada is one of the key producers of oilseeds in the world. The country has experienced high growth in this industry owing to the increased production of canola. There are some other countries that grow canola but Canada is likely to remain the world leader in the exports of canola. Around 90% of the canola that is produced in Canada is exported to markets in other countries. This dominating position of the country in the export of canola makes it an essential link in the value chain in the market.

More than 50 countries import canola seeds and canola oil from Canada. The United States is the biggest buyer of canola oil from the country. Further, for raw seeds, Mexico, Japan, and China remain important destinations.

Companies in the life science industry are stimulating the development of new canola varieties and traits that assist farmers in increasing their yield and managing challenges related to agronomics. Further, canola oil producers are also investing in new varieties of canola to provide special oil profiles, more protein, and higher oil content.

Canola oil is a rich source of omega-3 fatty acids, omega-6 fatty acids, monosaturated fats, and vitamin E. In comparison with other vegetable oils, it has a lower amount of saturated- and trans-fats. The consumption of this oil facilitates good heart health. The oil comes with various health benefits that include improved metabolism, reduced inflammation, and protection against strokes and heart attacks. In addition, it is also used to assist in the wholesome development of infants.

Canola oil contains around 7% of saturated fat and helps reduce the level of cholesterol in the human body, which is one of the main factors that will drive its sales growth over the coming years.

Which Factors are Expected to Stimulate Growth Opportunities for Canola Oil Manufacturers?

There is a noticeable increase in the prevalence of cardiovascular diseases around the world. In addition, rising health consciousness among individuals is also likely to propel the demand for canola oil around the world. Canola oil contains a higher amount of oleic acid which is helpful to lower the levels of cholesterol that is present in the human body.

The residual that is obtained after canola oil production comes with a low count of glucosinolates and a noticeable amount of amino acid. Furthermore, it is also utilized as livestock feed to provide minerals, vitamins, and fiber to the animals which are expected to improve their wholesome growth.

The fattening awareness related to the benefits of canola oil is likely to serve as one of the noticeable factors to drive sales opportunities. Further, it is also helpful to lower bad cholesterol without making any alteration in the good cholesterol.

Based on these health benefits, canola oil is used at an increased rate as cooking oil and for salad dressing. Thus, owing to the rising use of canola oil various novel growth opportunities in the market are likely to increase in the coming years.

“Increased Use of Canola Oil in Cosmetics Industry”

At present, canola oil is used at a noticeable rate in the industry of personal care and cosmetics. This product is used increasingly as a beauty oil due to its anti-aging properties. Further, it is helpful to control blemishes, acne, wrinkles as well as fine lines.

In addition, there are a lot of research activities that are taking place in the field of personal care and cosmetics to increase the use of canola oil in an effective manner. The lucrative growth in the market also analyzes the future potential of this oil and is likely to add insights to industry expectations with some prior options also.

“Rising Demand for Healthier Oils across the World”

In recent years, people around the world demand healthier oils in their routine applications, i.e. in the cooking process. Canola oil is helpful to maintain the level of cholesterol of human beings so it is used as an effective solution as cooking oil. In addition, its growing use in the feeds of livestock, poultry, and fish is estimated to help in their increased productivity.

The growing demand to incorporate canola oil in different processed foods is likely to create novel sales opportunities for canola oil across the globe in the years ahead.

The revenue share of canola oil is likely to grow with advancement in better and newer technologies. These innovations provide protection to crops against pests and frosts that are further likely to increase productivity. The best canola is free from green seeds as it reduces shelf life and quality when processed for oil extraction.

Innovation and development in advanced technologies also support the growth of the market revenue. The manufacturers who are serving in Canada have taken some initiatives to develop canola oil that come with omega-9. The newly developed technologies are also helpful for plant breeding for the longer and healthier life of people around the world.

With these novel innovations, there is a noticeable reduction in the consumption of bad fats and it further reduces the risk of heart disease. Thus, based on these advancements, increased demand for canola oil can be experienced.

Why are Sales of Canola Oil Limited at Present?

The price of canola oil is comparatively higher than other available market options. The research report published by Fact.MR states that there are a lot of other edible oils that are present in the livestock exchange. Soybean oil is one such substitute that is consumed by a larger population base and it is readily available in the global market.

But on the other hand, the health benefits of canola on human beings and raising awareness for the same are likely to increase the adoption of these products. Thus, the production volume appears to be more energetic. It is easier for manufacturers to regulate the production volume for better trends. 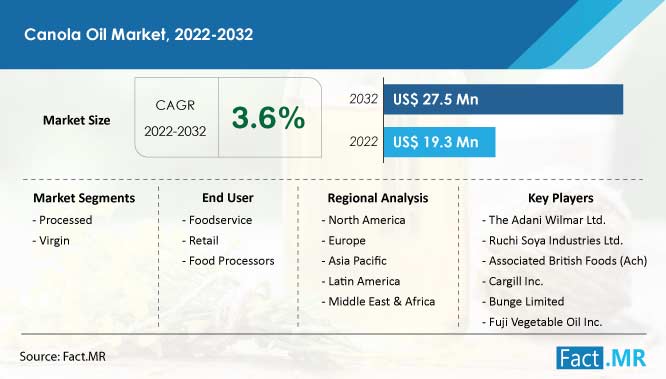 Which Regional Market is Likely to Be Lucrative?

“Europe to Account for Leading Consumption of Canola Oil”

Europe is estimated to serve as a favorable region for the generation of novel growth opportunities for canola oil. For the past few years, Europe has been experiencing increased consumption of this oil. Further, the regional market is likely to progress at a CAGR of 5% in the forecast period.

As per a research report that is published by Fact.MR, the European region provides a favorable environment that is helpful for the growth of market segments. The region holds a dominating position in each aspect of the industry.

Further, North America is also anticipated to hold a dominating position in the global market. The importance of various health benefits that are associated with the rising use of this oil also serves as one of the pivotal factors to bolster growth avenues in the regional market. In recent years, people from the North American region are gaining awareness about canola oil and its ability to reduce heart diseases.

Further, the increasing use of canola oil in cosmetics and cooking by the regional population is also likely to propel the demand for this product in the coming years.

Asia Pacific excluding Japan is likely to enjoy a significant share of the global market in the years ahead.

How Lucrative is Canada for Canola Oil Suppliers?

Key players are investing a handsome amount in R&D activities to make it one of the most valuable and significant oilseed crops globally.

This initiative is likely to help Canada achieve its strategic goals in the years to come.

Which Asian Countries are Predicted to Dominate the Regional Market?

Some prominent companies and governments from regional countries, such as India, China, and others are taking initiatives to reduce tax as well as import duty on different edible oils.

The states of South India are completely dependent on sunflower oil for their routine household cooking. Increased demand for canola oil is majorly coming from Karnataka, Telangana, Andhra Pradesh, and Tamil Nadu.

Based on product, demand for processed canola oil is anticipated to grow at a noticeable speed in the coming years compared to the virgin segment which presents an average rate of growth.

Compared to the virgin segment of the canola oil market, the processed segment has been predicted to hold double the industry revenue share. This dominance is attributed to the increased BPS that it enjoys.

Which Distribution Channel Will Account for High Sales Growth?

Franchise outlets and modern trade segments from the distribution channel of the market of canola oil are experiencing a loss in this ongoing year. In addition, the emergence of the online segment is likely to reflect more than the average rate of growth along with increased BPS in the forecast period.

The specialty segment is predicted to outrun these market segments based on growth rate as well as BPS in the years ahead. The segment is poised to express a CAGR of 4.5% by the end of 2022.

A detailed research report on the canola oil market includes a lot of profiles of key industry players that are serving in the current era. The report gives information related to strategies, market shares, global presence, mergers & acquisitions, expansion, recent developments, innovations, and product portfolios. This comprehensive research report is estimated to help consumers to get an in-depth insight into different aspects of the market.

Consumption of canola oil is predicted to increase at a CAGR of 3.6% through 2032.

*66 figures and 249 tables includes by FactMR