The global air-based foods market is estimated to surge ahead at a CAGR of 11.7% to top a market size of US$ 100 million by the end of 2032. The prime reason for the rapid adoption of air-based foods is the need for sustainable food production and depleting availability of cultivable land.

Air-based foods are expected to account for more than 2% share of the global alternative protein market by the end of 2032.

The concept of air-based food was first introduced by NASA in the 1960s, where the idea to turn carbon dioxide into bio-based food products for space travel was suggested. However, the technology to achieve the same was developed only recently.

Extremophiles (e.g. hydrogenotrophs), when combined with water and energy, have the ability to convert CO2 into biomolecules. Air Protein (Kiverdi) and Solar Foods are the pioneers of air-based food products. Solein, air-based protein by Solar Foods, will be launched commercially in 2023, and have key applications in the food and feed industry.

Rising awareness about alternative proteins across different domains is creating new opportunities for air-based food manufacturers. Additionally, increasing carbon emissions and limitation of land availability for plant- and animal-based food production will drive rapid adoption of air-based food products, with the market expected to surge at 11.7% CAGR through 2032.

According to Fact.MR, a market research and competitive intelligence provider, due to the product's focus on animal husbandry sustainability and carbon dioxide emission reduction with CO2 to protein technology, the market is anticipated to experience high growth after the product's initial years of launch. 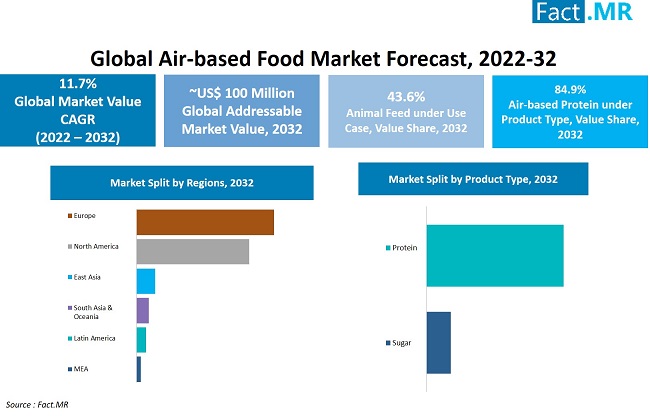 Market share analysis of air-based foods based on product type and region is provided in the above image. Under the product type segment, the protein sub-segment will dominate the market share by 2032.

Why are We Seeing Surging Popularity of Air-based Food Products?

Social awareness regarding the negative impact of severe food wastage across the world is gaining attention for sustainable food production such as air-based foods.

This food waste demonstrates a harmful impact on the environment; for instance, it is accountable for 6% of global greenhouse gas emissions.

Government programs, initiatives, and funding, such as the U.K.'s 100 kcal snacks campaign and WHO's action framework for developing and implementing public food procurement and service standards for a healthy diet, and reimbursements on utilizing CO2 for production of end products, would significantly enhance the market for air-based foods.

There are mixed sentiments of consumers in terms of acceptance when it comes to any new product with such innovative food technology. Explorers are open to new offerings; however, establishing a brand identity is of prime importance to increase penetration amongst conserved consumers. Consumers may find air-based food less appealing if they think of it as a research lab food rather than regular food.

Accelerated integration of global markets and rising number of international joint ventures lead to international legislations, influencing the food companies, especially novel food and novel food ingredients. This could affect the product launch dates of air-based foods in the market.

Why is Europe Expected to Exhibit High Demand for Air-based Foods?

Consumers in Europe are working to incorporate nutritive foods into their daily meals, which is accelerating the sales of alternative proteins. This is creating a huge market opportunity for air-based food suppliers as well.

The offering claims and labels used by emerging key players, such as 'land and sea independent food production', 'carbon-negative food', etc., are highly lucrative for the European government and consumers. Such initiatives are garnering significant support from Europe governments, boosting the market for air-based foods.

How is the U.S. Air-based Foods Market Progressing?

This is also true because of the well-established food sector and growing concerns over food production in the country.

The U.S. population consumes 815 billion calories of food each day, which is roughly 200 billion more than needed. This rising demand for food production, across North America, makes it a favorable region for air-based food manufacturers to make their mark.

Among the product type segments, air-based protein is expected to hold the highest market share. The prime reason for this will be increasing commercial consumption of air-based protein, mainly as an ingredient to produce a true meat analogue.

Life's most important aspect is nourishment, and with the rising demand or concerns over diet food consumption, demand for healthy food is on the rise, including proteins.

In response to environmental changes and sedentary lifestyles, consumers all across the world have shifted their attention from the intake of fundamental foods to the addition of alternative proteins and supplements. Increasing sports nutrition will be one of the key drivers for the air-based protein market.

Adoption of air-based food for human consumption is expected to be limited in the initial years. Once the bottleneck is surpassed and consumer faith is instated, air-based protein and sugar will find increasing applications in the processed food industry, HoReCa, and other food & beverage industry sectors.

Leading manufacturers of air-based food products use sustainable technologies and end-user-specific optimization techniques. As air-based protein does not require fertile soil for its processing, key manufacturers are concentrating on developing innovative product designs to address the challenges with product placement in harsh operating environments such as desert areas.

Robust R&D in the field is creating the best strategies, layouts, and approaches for turning carbon dioxide into protein, which can then be used to produce foods such as artificial meat, protein supplements etc.

Worldwide demand for air-based foods is anticipated to reach US$ 100 million by 2032-end.

Europe is expected to lead the global air-based foods market with 46.7% market share by 2032.