The global combi ovens market is valued at US$ 624 Mn in 2021, and is poised to grow at a CAGR of 7.8% over next ten year. North America is anticipated to dominate the global market and account for higher revenue with 1.8X increment by 2031.

Combi ovens have been huge gaining attention over the past few years, with the market slated to expand at a high CAGR of 7.9% through 2031. As per detailed analysis by Fact.MR, a market research and competitive intelligence provider, combi oven sales account for around 25% of the global ovens market.

Combi ovens, or combination ovens, are relatively a new cooking equipment that have been introduced in the restaurant industry and also for individual use. These were bought in around 15 years ago as a combination of steam and convection ovens, and soon gained popularity for use in hotels and high-volume restaurants.

One of the major features of combi ovens is the combination mode, in which, the oven uses both, dry heat and steam to maintain the required humidity levels, helping control the moisture level in the food. Also, there are smart combi ovens that are highly proficient, with distinct technological features such as self-cleaning combi ovens.

Primary driver for combi ovens is insatiable demand from the foodservice industry, which always pushes for faster and efficient ways of cooking. Curiosity of consumers to explore new tastes in food has pushed chefs to innovate various ways for cooking of different cuisines.

Combi ovens are the best for cooking meat due to the dry heat that is developed in the chamber, which does most of the required cooking, whereas, moisture from the available steam helps prevent the meat from drying out and shrinking.

Globally, the number of restaurants and premium & luxury hotels is multiplying, which is anticipated to boost growth of the combi ovens market. 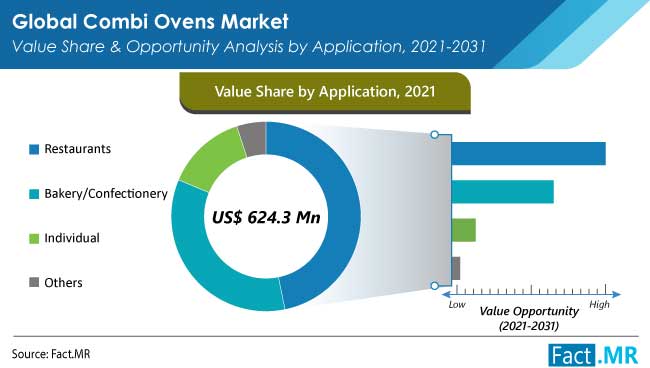 However, higher price of combi ovens is predicted to be a possible restraint for market growth in places where average spending and income is low as compared to areas where there is economic prosperity.

Why is Popularity of Combi Ovens Surging?

Smart combi oven demand is high mainly due to their high degree of user-friendliness and technological features. They have connected feature just like other smart kitchen appliances.

Moreover, integration of advanced technologies in combi ovens is facilitating newer cooking products in response to rising demand for convenience food across the world. This factor is likely to generate increased combi oven sales over the coming years.

What is the Market Scenario of Combi Ovens in the U.S.?

Asia Pacific is expected to be the most prominent market for combi ovens after North America, since, in this region, restaurants and premium hotels are booming, which is further anticipated to fuel demand growth of combi ovens over the coming years.

Which Type of Combi Ovens are the Most Used in the Industry?

Will Online Sales of Combi Ovens Increase in Future?

Key players in the combi ovens market have adopted various marketing strategies such as mergers & acquisitions, expansions, product launches, and innovation. Alongside, they are focusing on strengthening their retail and distribution channels.

The global market size for combi ovens is currently worth US$ 624.3 Mn.