Overall, the data acquisition system landscape is poised to yield an absolute dollar opportunity worth US$ 1.2 Billion by 2032.

Moreover, hardware data acquisition (DAQ) system and aerospace & defense will continue to remain the primary beneficiaries of the data acquisition systems market, likely to register a CAGR worth 5.7% and 5.5% respectively, from 2022 to 2032. The U.S is projected to represent the highest growth across the global market.

The data acquisition system market is expected to grow on account of growing human machine interface applications, which is expected to hold a significant share during the forecast period.

HMIs are used in various locations, such as process control, factory floor, machines, portable handheld devices, etc. Applications of this technology include various appliances, automotive, machine health monitoring, and industrial automation, among others. An HMI solution improves the operator's productivity and provides insights into system control and maintenance. For instance, the HMI function of setting off alarms provides visual indicators of a machine's issue and severity.

Technologies, such as Open Platform Communications Unified Architecture, integrated into PC-based machine controls, have allowed the safe transmission of encrypted data from machine to cloud and enterprise-level systems.

Owing to the broadening of its functionality, through the integration with PLC applications or PC-based multi-user systems, HMI technology has also increased market adoption. In addition, the increasing adoption of Industrial IoT, coupled with these benefits of HMI, is expected to drive market growth.

Industries such as aerospace, wireless communication, automotive, and manufacturing are increasingly adopting 5G technology. In the automotive sector, for instance, the current 4G technology is not fast enough to support the development and adoption of autonomous cars.

Similarly, in the aerospace sector, 5G technology is used to increase the reliability of the avionics equipment by reducing latency and increasing the connectivity speed. Further, various countries have already been investing in 5G technology to enhance the digital infrastructure and stay competitive in the digital economy. South Korea, China, the US, and Germany are some major countries adopting and deploying 5G infrastructure of wireless technology.

For instance, monitoring wind turbine data has become critical to wind power generation operations in the US in recent years. According to British Petroleum, the total wind generation in the US was 340.9 TWH in 2020, which was the highest to date. Also, the US was ranked second in terms of total wind consumption after China in 2020.

With increasing wind power capacity, wind turbines need to be constantly monitored for parameters such as vibrations, wind speed, and temperature for efficient and reliable operations. In the aerospace industry, data monitoring helps in analyzing the flight aerodynamics characteristics and validating the design and safety parameters of the engine and other aircraft components.

The global data acquisition system market is highly competitive, with several manufacturers trying to develop new systems to meet the growing demand for applications through innovation, quality, and service. This is further driven by the increased competition among OEMs to adopt new technological advancements in the automotive, aerospace & defense, and energy sectors.

The engineers and designers of these technological solutions often need to test and upgrade their equipment to remain competitive in the market. In recent years, the adoption of 5G and IoT in manufacturing has been the key focus of development for major OEMs in the aerospace and automotive sectors in North America and Europe.

For instance, top aerospace manufacturers such as Airbus and Boeing use IoT technology to perform advanced analytics, which enhances the manufacturing performance through live tracking and advanced simulations to determine the lifecycle of the equipment.

Consumers of DAQ systems are highly price-conscious and demand low-cost DAQ systems that have a higher quality. However, a DAQ system’s cost depends on key parameters such as sensors, channel counts, and the necessity to design a DAQ system to survive harsh working environments. The more the channel count and speed, the higher will be the cost.

DAQ systems are becoming increasingly complex due to technological advancements in the design and development of these equipment. This creates the demand for higher testing capabilities, and manufacturers are continuously required to upgrade their existing technology to cater to the demands of specific applications. Manufacturers of DAQ systems also need to adhere to various technical standards, and this increases the cost of a DAQ system. 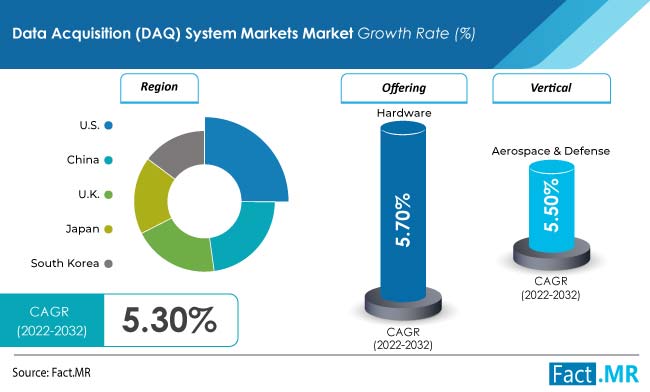 What is the Growth Outlook for Data Acquisition (DAQ) System in the U.S?

The demand for Data Acquisition (DAQ) System services in the U.S is likely to expand at a 5.1% value CAGR until 2032, forecast to yield an opportunity worth US$ 1.1 Billion.

The United States is on the verge of the fourth industrial revolution, where data is being extensively used for production and integration with a wide range of manufacturing systems across the supply chain. The country has been one of the leading automotive markets in the world and is home to over 13 major automobile manufacturers.

Industrial automation is the primary driving factor, which is expected to drive the demand for the DAQ systems, as the increasing adoption of controlling processes without human interference is heavily reliant on data to provide instructions, and hence any minor misdirection may lead to drastic losses to the industry.

The US is a key market for factory automation and advanced devices and equipment installation within the North American region. The demand for advanced manufacturing technologies may further enhance the demand for DAQ products in the market.

How do Growth Prospects Appear in the Chinese Market?

Rising demand for automobile production in the country

Rapid advancements in technologies, increasing manufacturing units, stringent regulatory policies pertaining to testing and measurement of products, strong government support towards manufacturing and adoption of new technologies such as AI and IoT, and significant presence of key industry players in the country are a few major factors driving the DAQ system market growth in China.

Moreover, China is the largest vehicle manufacturer in Asia Pacific region. Increasing penetration of different automotive OEMs/plants in the country, attributed to the rising demand for automobile production is driving the Data Acquisition System market in the country.

Is Japan likely to emerge as an Opportunistic Data Acquisition (DAQ) System Industry?

Factors such as huge technological advances, high market penetration of automation, and the early adoption of advanced technologies influence the DAQ system market growth. Besides, the spurring rise in the manufacturing sector and the presence of key industry players in Japan are expected to boost the Data Acquisition System market over the analysis period.

In addition, stringent regulatory policies for product testing and measurement, alongside the strong government support for the manufacturing sector and promoting new technologies such as AI and IoT, create the vast market demand. Japan is expected to grow at a CAGR of 3.6% and is expected to represent a market share of US$ 174.0 Million by 2032.

Further, high manufacturing infrastructure investments and increased cloud services adoption boost the growth of the Data Acquisition System market in the country. The high adoption of automation and control systems and the growing power sectors in this country fuel the market growth.

Why is the Market Demand Rising Rapidly?

By Offering, the Hardware Data Acquisition (DAQ) System is likely to remain the top category, growing at a value CAGR of 5.7% from 2022-2032.

Data Acquisition hardware is widely used due to its modular design and the possibility of arranging various combinations to satisfy a wide range of customized experimental setups. The adoption of Ethernet is gaining momentum owing to factors such as interoperability and ease of integration, thereby fueling the demand for DAQ hardware.

The demand for DAQ hardware is rising as they are widely deployed in manufacturing applications—in both process and discrete, laboratory/R&D, automotive, and aerospace & defense markets.

Which Vertical is expected to Leverage Data Acquisition (DAQ) System the Most?

The Aerospace & Defense vertical of the Data Acquisition (DAQ) System Market is expected to grow at a value CAGR of 5.5% from 2022-2032.

The growth of the Data Acquisition system market for the aerospace & defense vertical is driven by the need for testing aircraft and their components with real-time monitoring features against various parameters and extreme environmental challenges.

The Data Acquisition systems play a vital role during various testing procedures in ensuring that the aerospace products and components meet the desired functional specifications.

These tests are carried out during the design, development, and manufacturing stages of aerospace components and play an important role in confirming if aerospace components, subsystems, and complete flight systems meet the specified requirements. These factors have contributed to the increased demand for DAQ systems in the aerospace & defense vertical.

The global market for data acquisition systems is characterized by the presence of multiple vendors, aiming to offer extensive products to consumers. Additionally, key makers are focusing on developing the devices supported by the implementation of stringent government regulations, and are offering solutions tailor-made to suit their business objectives. In addition, the vendors are likely to leverage upgradation and product differentiation to gain an edge over other competitors in the market.

As of 2021, the Data Acquisition (DAQ) System Market was estimated to have reached US$ 1.7 Billion

By 2022, the expected demand for Data Acquisition (DAQ) System to reach US$ 1.8 Billion

By 2032, the market for Data Acquisition (DAQ) System is likely to be valued at US$ 3.0 Billion

By 2032, Fact.MR expects the U.S market for Data Acquisition (DAQ) System to reach US$ 1.1 Billion

China is expected to register a 4.6% CAGR with regard to the Data Acquisition (DAQ) System Industry

Japan is expected to document a CAGR worth 3.6% in the Data Acquisition (DAQ) System Market

Hardware Data Acquisition (DAQ) System will expand the fastest, expanding at a 5.7% CAGR

Aerospace & Defense will remain most prominent category, expanding at CAGR of 5.5% until 2032