Newly released data from the film adhesives market analysis concludes that demand expanded at a CAGR of over 2% from 2016 to 2020. In 2020, the market enjoyed a valuation of over US$ 1 Bn, which is expected to nearly double to reach around US$ 2 Bn by 2031.

Sales are anticipated to remain elevated across the electrical & electronics industry, generating more than 2/5 revenue through 2031, while aerospace is expected to trail close behind.

As per industry survey by Fact.MR - a market research and competitive intelligence provider, from 2016 to 2020, film adhesives sales expanded at over 2% CAGR. Growth was spurred by increasing applications across such key industrial sectors, including automotive & transportation, electrical & electronics manufacturing and aerospace.

Growth prospects dimmed significantly with the outbreak of COVID-19, with Fact.MR’s film adhesives industry analysis estimating a market value of just over US$ 1 Bn in FY 2020. Declining industrial activity contracted production targets, in lieu of stringent lockdowns. However, from 2021 to 2031, the market is slated to expand at approximately 4% CAGR.

For example, Henkel AG’s epoxy assembly films provide enhanced functionality and power requirements for electronic equipment. A core feature of this technology is thermal management. Hence, they are broadly applied across such key industries as aerospace, telecommunications and electronics respectively. These also help generate minimum wastage during the adhesive application process.

Why is the Film Adhesives Industry Research Vouching for Opportunities in the Aerospace Industry?

Over the years, several manufacturers have capitalized on this ever opportunistic industrial domain. For instance, Permabond, an ISO 9001 certified manufacturer, offers anaerobics, cyanoacrylates, epoxies, acrylics and UV curing adhesives. Likewise, in June 2021, Solvay S.A launched the AeroPaste 1006, 1009 and 1100 adhesive pastes, along with the BR 179 non-chromate primer. 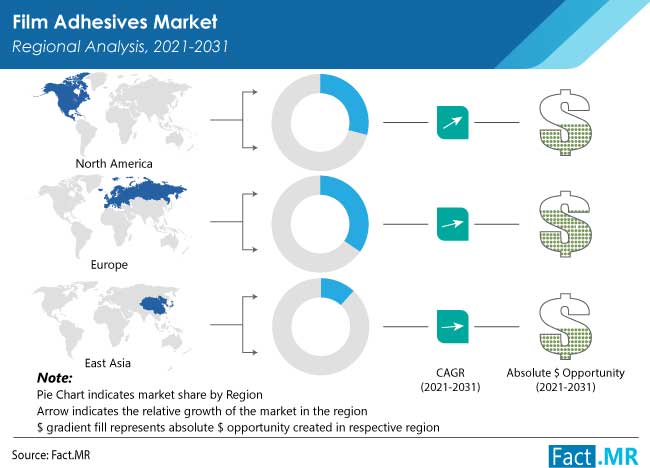 What is the Film Adhesive Demand Forecast across the U.S.?

Fact.MR’s film adhesives industry survey for the U.S concludes that the market reached almost US$ 340 Mn in 2020. Such heightened sales may be attributed in large part to a flourishing aerospace industry since the past several years.

According to the Aerospace Industries Association, the U.S aerospace & defense industry posted lucrative gains in 2019, with combined industry sales valued at over US$ 909 Bn or 6.7% increase from 2018. Bulk of this growth occurred in space systems.

How Does China’s Film Adhesive Industry Survey Appear for the Long-Run?

China represents one of the most opportunistic markets for film adhesives sales, expected to reach more than US$ 350 Mn by 2031, growing at a noteworthy 7% CAGR. Maximum uptake is expected in the automotive & transportation sector, as sales of both conventional and electric vehicles acquire momentum.

Sales are likely to be especially strong in the consumer electronics industry, which is valued at almost US$ 300 Bn as per recent estimates.

Based on end use industry, demand for film adhesives is expected to remain strong across the forthcoming decade. As of 2019, the segment generated over 1/3 of the global revenue share, expected to account for over 40% by 2031, on the back of rising demand for electrical & electronics components across key industries.

Film adhesives are usually deployed across electrical & electronic components for bonding internal and external components, such as circuitry, switches, wires, protective coverings and others. They are also deployed to provide internal insulation and temperature regulation.

What is the Film Adhesive Demand Outlook for Epoxy Resins?

By resin, sales of epoxy film adhesives are anticipated to surpass US$ 790 Mn by 2031-end, projected to record a CAGR exceeding 4% in value terms. Growing demand for high performance adhesives is stimulating future growth prospects.

Owing to their ability to adhere to a broad spectrum of materials, enhanced strength and resistance to chemicals, as well as their ability to resist creep under sustained loads, epoxies are the most frequented film adhesives.

Presence of multiple regional and global level manufacturers renders the film adhesives landscape highly competitive. To withstand this intense competition, key players are focusing on capacity expansion and product launches to cater to the ever widening demands from key end use industries.

What is the global film adhesives market worth?

The global film adhesives market is valued at over US$ 1 Bn.

What is the future outlook for the film adhesives market?

By 2031, the market for film adhesives is expected to expand almost 2X to be valued at around US$ 2 Bn.

What was the historical CAGR for the film adhesives landscape?

What has been driving demand for film adhesives in recent years?

Increasing demand for electrics & electronics has been majorly influencing sales of film adhesives in the past few years.

What is the most promising opportunity for film adhesive manufacturers?

Sales of film adhesives are expected to incline most favorably across the aerospace industry.

Which are the top 5 markets for film adhesives for the years ahead?

The U.S, Canada, Japan, China, and Germany are expected to remain the top 5 markets for film adhesives.

Who are the top 5 manufacturers of film adhesives?

Which is the most prominent resin type in film adhesives?

Demand for epoxy film adhesives are anticipated to surpass US$ 790 Mn, expanding at a CAGR exceeding 4% through 2031.

What is the North America market outlook for film adhesives?

North America is expected to generate credible expansion opportunities, with the U.S. being valued at almost US$ 340 Mn in 2020.

Which are the opportunistic markets in the Asian landscape?

India, Australia, and South Korea are poised to emerge as key hotspots in the Asian landscape for film adhesives.

Film Spray Market is set to witness steady growth by 2029. The growing consumer trend of Do-it-Yours...

Building Integrated Photovoltaic (BIVP) Market expects a stellar 18.1% CAGR with a US$ 88.6 Billion ...