North America leads the global market with the highest market share of 32.1% in 2021.

Film formers are used to form a layer on a substrate to protect it from hazardous rays and chemicals. They are widely used in cosmetics and paints. Extensive use of film formers in various industries continues to propel demand in the global market.

Film formers are used in the making of personal care products such as shampoos, serums, face creams, moisturizers, etc. Film formers used in skin care products help in protecting the skin from UV rays and other hazardous bacteria prevailing in the outside environment.

Over the 2017-2021 period, the global market for film formers registered a CAGR of 3.9%. Fact.MR, a market research and competitive intelligence provider, reveals that sales of film formers across the world will exhibit growth at 4.9% CAGR between 2022 and 2032. 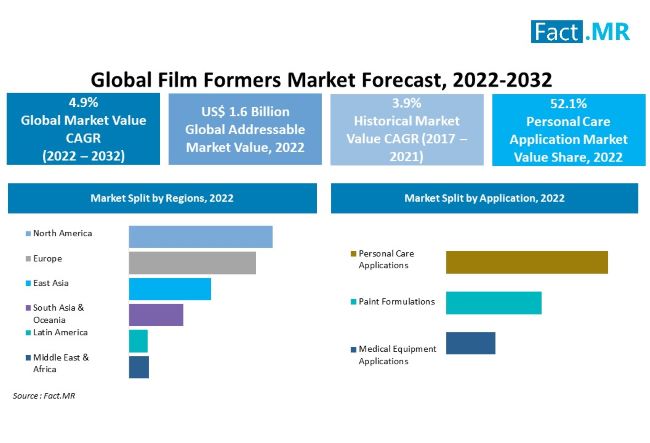 Film formers are widely used in the medical sector on clinical gadgets as they can prevent them from corrosion and increase their bio-compatibility.

Films are important in transdermal systems as well, creating an easier and safer way for drug delivery to patients. Overcoming patient adherence is an essential objective for the medical sector today. This isn't being business as usual, since, as per an IMS Institute for Healthcare Informatics report distributed in 2013, expanding medicine adherence could save more than US$ 200 million yearly (approximately 8% of U.S. medical care consumption at that point).

“Emerging Use of Bio-based Film Formers in Cosmetics”

Bio-based materials have boomed worldwide in recent years because of their being eco-friendly, durable, and easy to adapt. Bio-based film formers are a new generation of materials that are still gaining market share. They are a possible replacement for conventional film-forming ingredients due to the increased interest in sustainable development. Also, government efforts to promote products that are eco-friendly and non-hazardous to the environment are helping the market for biodegradable film formers grow at a faster rate than synthetic film formers.

Innovation and development of new products is the basic requirement for every industry and that helps in raising the market size also. Personal care and cosmetics is the biggest market across the world, and film formers account for a major part of various skin care products and enable them to create a layer on the skin of humans to help protect from external factors such as the sun, heat, and dust.

What Do film Former Manufacturers Need to Be Aware Of?

Due to global warming, the average atmospheric temperature is increasing every year across the world. This rising temperature has a very bad impact on the human body. Due to global warming, skin diseases are increasing in the worldwide population. Now, people have become conscious about their skin and health and purchase sun care products and other cosmetics to protect their skin from hazardous sun rays.

Manufacturers should focus more on research and development to develop customized solutions that are eco-friendlier and have fewer side effects. Also, focusing on the personal care industry for generating revenues can prove to be a game changer for manufacturers as growth is expected to be much higher as compared to other end-use applications.

Will High Use of Cosmetics & Skin Care Products In the U.S. Drive Film Former Demand?

Increasing awareness about skin safety among people is a major driving factor positively impacting the overall demand for film formers in the U.S. market. Currently, commercial and industrial applications of film formers are growing rapidly in the country.

The first wave of commercial products is focused on skin care products such as sunscreens and hair care products & moisturizers. People are also becoming highly conscious about their looks, which is driving the consumption of such products around the country.

As such, the United States film formers market is expected to expand at a CAGR of 5% during the forecast period of 2022-2032.

Why are Manufacturers Eyeing the China Film Formers Market?

Today, China is the world’s second-largest economy and has the largest population. The disposable income of people is also increasing across the country.

China’s population is around 1.4 billion, which is approximately 19% of the world's population. This high population creates a huge demand for cosmetics and skin care products across the country.

China is anticipated to hold the largest market share of 38.5% in East Asia and the market is set to expand at a CAGR of 5.9% over the next ten years.

How Fast is Demand for Natural Film Formers is Rising?

Environmental pollution is a major problem across the world and has a bad impact on human health. Most film formers are synthetic and are derived from petroleum sources that are not compatible with the environment.

The burning of fossil fuels releases a large amount of carbon dioxide into the environment, which increases heat in the atmosphere and causes global warming. Due to such problems, consumers are seeking eco-friendly products in every sector. Governments are also encouraging the development of bio-based and eco-friendly products to reduce carbon footprint.

Owing to the above facts, demand for natural film formers is projected to increase rapidly at a CAGR of 5.3% during the forecast period.

What is the Stance of Film Formers in the Paints & Coatings Industry?

The global paints and coatings market reached US$ 184 billion in 2021, which is around 20% higher than the 2019 market value. Film formers are a major part of paint formulations that form a film over the surface of a metal or material for corrosion resistance. Film formers give different properties to the applied surfaces, such as sparkle, sturdiness, adaptability, and strength, due to which, they are widely used in paint formulations.

As a result, demand for film formers for use in paint formulations is expected to reach a market valuation of US$ 855.9 million by the end of 2032.

What is the current valuation of the film formers market?

The global film formers market is currently valued at US$ 1.6 billion.

How is the market for film formers expected to progress over the coming years?

Worldwide demand for film formers is anticipated to reach US$ 2.5 billion by 2032, increasing at a CAGR of 4.9%.

How did the market fare over the historical period?

Which region leads the global market for film formers?

North America leads the global film formers market with a market share of 32.1%.

Which type of film formers continues to rule the market landscape?

The global paint protection films market is projected to expand at a CAGR of ~5% throughout the fore...

The global resealable films market size will expand 1.5X in terms of value, and is foreseen to witne...