Sales of agricultural films accounted for 5.9% share of the global films market at the end of 2021. The growing need to enhance crop production and the introduction of greener ag films will result in higher sales opportunities for market players.

Agriculture films are also known as plasticulture or agricultural plastic and are projecting high investment opportunities. Manufacturers are investing in R&D to develop innovative and eco-friendly solutions to cater to the varied needs of customers. Rising investments by governments are supplementing product sales growth. Recycling and the development of used products make these attractive to customers.

From 2017 to 2021, the global ag films market registered a CAGR of 3.5%, and according to this latest study by Fact.MR, a market research and competitive intelligence provider, the industry is projected to expand at 5.7% CAGR between 2022 and 2032. 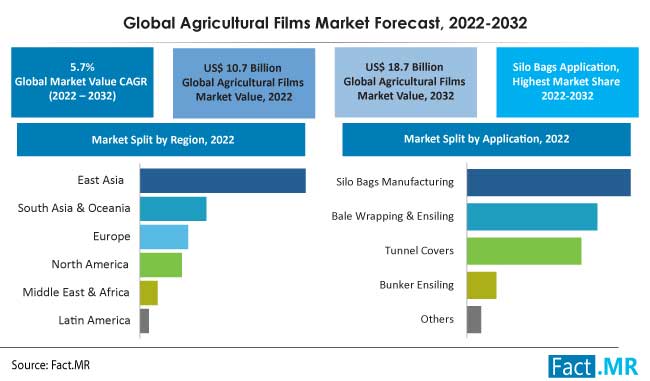 Market share analysis of agricultural films based on application and region. Under the application segment, silo bag manufacturing leads with 36.4% market share in 2022.

The proliferating agriculture sector across the world is attracting high investments and expenditure, which directly increases sales in the market.

Hence, the growing demand requires high productivity and it not only increases production capacity but also enables farmers to have extended growing seasons, conserve water, and limited or zero pesticide requirements.

“Use of Biodegradable & Recycled Material Will Enhance Market Outlook”

With rising concerns about environmental pollution, several governments have framed their policies to shift towards eco-friendly solutions. This will lead to an increase in demand for bio-degradable and recyclable products used for several applications.

By looking into the global scenario and the rapid adoption of environment-friendly products, manufacturers should focus on finding eco-friendly solutions for the market. More than 75% of raw materials used in manufacturing are not eco-friendly; however, they can be recycled after use.

Manufacturers have adopted several recycling techniques and are setting up separate plants for recycling purposes, which not only reduces raw material costs but also increases profit margins from the films produced.

A majority of manufacturers are involved in some sort of recycling and manufacturing fresh products from recycled materials, which has become a global trend.

In addition, growing awareness about arable land pollution is set to cascade the effect of the overall consumption of these films on a macro scale. Furthermore, organic farming is gaining traction; however, the use of agriculture films is limited as they contain polymers or biodegradable plastics, which are estimated to enter the food chain and cause an adverse impact.

To overcome such challenges, manufacturers should focus on the adoption of raw materials made of cellulose and other eco-friendly materials, which will eliminate the micro-plastic challenges. Further, the use of agricultural waste will contribute to a greener future.

How is the Matured U.S. Market Expected to Fare?

The country’s agriculture, food, and related industries contributed over US$ 1.55 trillion to the U.S. GDP in 2020, a 5% share. This has resulted in the high adoption of ag films in the U.S in the past few years.

The United States market is currently estimated at US$ 1.07 billion and is expected to expand at a CAGR of 4.1% through 2032.

Why Does China Remain a Preferred Investment Country for Agricultural Film Manufacturers?

The available area under cultivation is insufficient to meet the food requirements and it cannot be increased due to a continuous decrease in arable land. Such factors have promoted the practice of controlled agriculture to meet the demand of the booming population. This has led to the high adoption of ag films across China to increase production capacity.

Furthermore, China has become a major producer and consumer in the market. This, in turn, has resulted in a rise in cultivation to meet the increasing food demand of the population. Hence, the industry has high demand across China and will continue to witness high sales opportunities over the coming years.

The China market for ag films currently stands at a valuation of US$ 4.17 billion.

Why are We Seeing Higher Demand for Agricultural Mulching Films?

Agricultural mulch films have high demand due to their features - they limit weed growth, modify soil temperature, prevent moisture loss, and improve crop yield and precocity as well. These mulch films are mainly used to grow food and vegetable crops over extensive areas.

In the U.S., around 57. 15 million kilograms of mulch cover crops or soil. China is considered to be the leading country in the use of plastic mulch in agriculture, covering around 10% of its farmland.

Furthermore, the introduction of biodegradable mulch has reshaped the growth trajectory of the segment. Its use eliminates the requirement for pesticides and herbicides. The use of mulch films helps conserve water, easy & clean harvesting, and also extends the growing season for some crops.

The segment has increased steadily in the recent past, reaching a market valuation of US$ 5.17 billion in 2022.

LLDPE films are also a reliable alternative to HDPE. Comparing both films, HDPE is stiffer as compared to LLDPE films, making LLDPE a more suitable substitute.

The growth of the LLDPE segment is attributed to its reliable and advanced properties such as tensile strength and high puncture resistance, coupled with low cost of production as compared to other types.

Key Manufacturers and Their Marketing Strategies

Leading market players are focused on producing sustainable and biodegradable solutions to curve the demand graph. Product launches with capacity expansion are key strategies being adopted by industry players. They also rely on innovation and advanced technology to produce customer-oriented solutions to increase their sales opportunities.

The global agricultural films market is valued at US$ 10.7 billion in 2022.

Global sales of agricultural films are anticipated to reach US$ 18.8 billion by 2032.

Between 2017 and 2021, worldwide consumption of agricultural films increased at 3.5% CAGR.

East Asia is a leading market for agricultural films, accounting for 47.3% market share.