Polyfilm market growth is dependent on increasing demand for polyfilms for several applications such as food packaging, medical applications, etc. BoPP polyfilms are anticipated to witness a substantial increase in demand over the forecast period as they are being increasingly used in food packaging applications and are replacing cellophane due to their favourable characteristics and low costs.

Shrink wrap films are in high demand for kitchen applications and are expected to witness good growth across the forecast period. Shrink film bags are anticipated to see an increase in popularity as the demand for on-the-go food packaging increases.

CPP polyfilms, BOPP films, polyfilm plastics, and other types of films are expected to witness good growth in demand in the coming years. The HDPE segment is expected to be valued at US$ 41.22 billion by 2032 while expanding at a CAGR of 3% throughout the forecast period.

The rising use of specialty polyfilms in various end-use industries in Europe is expected to drive polyfilm market growth over the coming years. The polyfilm market in Europe currently stands at a market share of 26.8% and is anticipated to attain an approximate valuation of US$ 50 billion by 2032.

The packaging industry has witnessed a substantial increase in demand for polyfilms in the past few years as sales via e-commerce and online channels have increased. Over the period 2017 to 2021, the polyfilm market evolved at a CAGR of 2.7% and held a value of US$ 128.54 billion in 2021.

The polyfilm packaging market is anticipated to exhibit steady growth over the coming years owing to the increasing demand for packaging solutions. Rising popularity of e-commerce platforms, increasing disposable income, growing use of films in industrial applications, and technological advancements are expected to be prominent factors that govern polyfilm market growth in the coming years.

Increasing adoption of advanced farming techniques has also favored sales of agricultural stretch films and is expected to drive polyfilm market potential throughout the forecast period.

Rising focus on healthcare is also predicted to propel the consumption of medical flexible packaging across the world in the coming years. Increasing sales of pharmaceuticals are also expected to drive the consumption of polyfilms for packaging owing to their assured protection quality and low costs.

Stringent mandates to conserve the environment are anticipated to restrict sales of polyfilms throughout the forecast period. Strenuous recycling processes associated with polymer recycling are also expected to constrain the consumption of polyfilms. 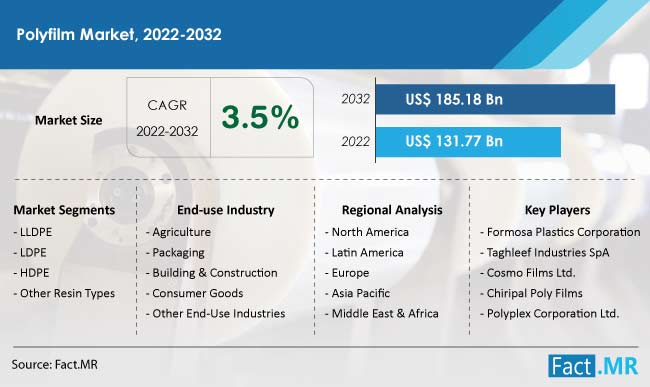 Which Polyfilm Benefits Make it a Popular Choice across Industries?

Polyfilms are available in almost shapes, sizes, and materials and are pretty much easy to adapt for any desired application, this versatility of polyfilms is what is making them popular in several industry verticals. Polyfilms are lightweight and low cost as compared to other alternatives and this also favors their adoption in different applications where budgetary constraints are strict.

Polyfilms are highly flexible and possess excellent impact resistance qualities which makes them a perfect fit for packaging applications. Polyfilms are being used for secure packaging and transportation of consumer electronics that are expected to witness high demand over the years to come.

Which Detrimental Aspects Could Decrease Shipments of Polyfilms?

Sustainability has become a prominent trend on a global scale and to achieve sustainability governments across the world are enforcing new regulations that are eco-friendly and prevent further degradation of the environment. Sales of PE polyfilms are anticipated to witness a downfall over the coming years.

These mandates are banning the use of products that are hard to recycle and since recycling polyfilms is a major challenge for polyfilm manufacturers it is expected to have a negative impact on overall polyfilm market potential through 2032.

Which Regional Market is Expected to Provide New Business Opportunities?

“Asia Pacific Market to Be Rife with Rewarding Opportunities”

The global polyfilm market is dominated by North America, which accounts for a major market share of 31.2% in 2022. Increasing use of specialty polyfilms and other polyfilms in various end-use industries is expected to be a prominent factor driving polyfilm market growth over the forecast period.

The region is also expected to be highly lucrative for products such as CPP films, PE polyfilms, PVC polyfilm rolls, shrink polyfilms, etc. The manufacturing costs of the aforementioned products are expected to be lower than in other regions in Asia Pacific, and hence, manufacturers can increase their profit margins to gain more benefits.

Asia Pacific is anticipated to provide highly rewarding opportunities for polyfilm manufacturers as demand for polyfilms increases in the region owing to rapid urbanization.

Rising penetration of e-Commerce platforms, increasing disposable income, and the presence of lucrative agriculture sectors are expected to be major factors that drive polyfilm consumption in this region. Demand for polyfilms in the packaging industry in the APAC region is anticipated to rise at a CAGR of 4.3% across the forecast period.

Shrink films are anticipated to see an increase in demand from the food industry in the APAC region and will provide new opportunities for shrink film manufacturers through 2032. The growing food industry landscape is expected to propel the demand for food service packaging in this region across the forecast period.

The Asia Pacific polyfilm market is projected to evolve at a CAGR of 3.5% through 2032 and is estimated to reach a net valuation of US$ 53.73 billion at the end of the forecast period.

“High Demand for Polyfilms in Europe Driven by Packaging Industry”

The region of Europe is expected to see high demand for polyfilms throughout the forecast period owing to the presence of key packaging manufacturers in this region. The packaging industry is anticipated to account for a market share of 24.6% in the Europe polyfilm marketplace by the end of 2032. The rising focus on sustainable packaging is expected to have a hampering effect on polyfilm market growth in this region.

Stringent mandates to regulate environment conservation and reduce harmful waste are being implemented across Europe and this is expected to be a challenge for polyfilm manufacturers as demand for sustainable solutions will skyrocket over the coming years. This could also prove to be an opportunity for polyfilm vendors in Europe to create novel and innovative products and gain a competitive edge.

Fact.MR, a market research and competitive intelligence provider has performed a detailed analysis of all major regions and is listed in this new research survey.

What Makes the U.S. a Lucrative Market for Polyfilm Companies?

“Rising Use of Polyfilms in Several End-use Industries across the U.S.”

Construction activities have increased in the United States and are predicted to follow a similar trend over the forecast period as well. Along with the construction industry, the use of polyfilms has increased in several other industries such as packaging, agriculture, pharmaceutical, etc. in the United States, and this is expected to drive sales of polyfilms in the coming years.

Increasing sales of pharmaceuticals in the country are also expected to favor polyfilm demand over the years to come. The packaging industry is also anticipated to propel shipments of polyfilms in the United States owing to the rising sales of several products.

Why Should Polyfilm Suppliers Keep an Eye on China?

The government of China has increased its focus on bolstering its industrial sector and this has made it a crucial manufacturing hub in the world. Supportive government initiatives have also attracted investments in China which are fueling industrial growth and subsequently driving demand for polyfilms in the country.

The polyfilm market in China accounts for a significant market share of 47.3% in the region of Asia Pacific in 2022 and is expected to attain an approximate value of US$ 25.28 billion by 2032.

Which Type of Polyfilm Could be Highly Lucrative for Polyfilm Vendors?

Based on type, the polyfilm market is segmented into LLDPE, LDPE, HDPE, and other resin types. The LLDPE segment is projected to account for a prominent revenue total of US$ 63.66 billion by the end of 2032 and currently holds a major market share of 33.9% in the global polyfilm industry landscape.

Demand for LDPE polyfilms is anticipated to expand at a CAGR of 4% throughout the forecast period which is higher than any other segment. At present, sales of LDPE polyfilms in the Asia Pacific region account for a net value of US$ 10.4 billion.

Why are Top Polyfilm Companies Focusing on the Agriculture Industry?

As the population of the world is increasing, the demand for food is also subsequently going upwards. This has enabled the adoption of advanced technologies and techniques in the agriculture industry to maximize yield and increase productivity. Stretch polyfilms are anticipated to see high demand from this industry in the years to come.

Use of polyfilms in the agriculture industry is anticipated to rake in sales revenue of US$ 55.56 billion by 2032 and currently holds a dominant market share of 28.6% in the global marketplace.

The polyfilm market, based on end-use industry, has been segmented into agriculture, packaging, building & construction, consumer goods, and other end-use industries.

Sales of polyfilms in the consumer goods industry currently stand at a valuation of US$ 21.38 billion and are projected to increase at a CAGR of 2.9% through 2032.

How is Polyfilm Demand from the Packaging Industry Predicted to Evolve?

“Consumption of Polyfilms in Packaging to Witness Robust Increase”

Due to their characteristic properties of being lightweight, durable, impact-resistant, and low cost, polyfilms are the perfect choice for packaging applications. This factor is prominently driving demand for polyfilms in the packaging industry.

Increasing demand for packaging services and solutions owing to rising e-Commerce activity and increasing disposable income is expected to drive polyfilm demand at a CAGR of 4% over the forecast period in the packaging industry. The packaging industry is projected to account for a net value of US$ 46.1 billion by the end of 2032 in the global polyfilm marketplace.

Key polyfilm manufacturers are investing in research and development to create more sustainable and eco-friendly products that are compliant with the new stringent mandates being imposed. Polyfilm suppliers are also deploying innovative strategies to enhance their revenue generation potential.

Market players are also eyeing mergers, acquisitions, and collaborations to increase their market presence and gain a competitive advantage over others.

What valuation does the polyfilm market enjoy at present?

What is the expected revenue from the polyfilm market by 2032?

What is the predicted growth rate for polyfilm sales through 2032?

Which type of polyfilm is expected to see an increase in demand?

The agriculture end-use industry is projected to account for a major market share of 30% by the end of 2032.

What polyfilm companies are operating in the global marketplace?

Forming Films Market is expected to witness steady growth throughout 2029. Rising demand in food & b...