Biliary stent sales are predicted to increase faster at a CAGR of 6% and reach a valuation of US$ 313 million by 2027.

The stent is a type of medical device that was first designed for recanalization or the closing of any lesion that was leaking or blocking blood flow. When bile ducts, small bowel, esophagus, and colon are blocked by significant cancer tissue formation, gastrointestinal stents are utilized to relieve those organs.

Depending on the material utilized, stents may be implanted permanently or can be removed. The purpose of stenting is to lessen digestive tract blockage in patients. Furthermore, technological development has improved stent performance and decreased stent-induced complications to improve quality of life, which is expected to fuel sales of gastrointestinal stents.

GI stents market share is expanding as a result of the growing popularity of minimally-invasive surgeries. Due to some advantages over conventional products, such as decreased blood loss, decreased infection risk, shorter hospital stays, and quick recovery, these gastrointestinal treatment devices are increasingly being used for the therapy of a variety of gastrointestinal illnesses.

Global gastrointestinal stent sales are currently valued at US$ 516 million and are expected to increase at a CAGR of 5.5% from 2022 to 2027, says Fact.MR, a market research and competitive intelligence provider. 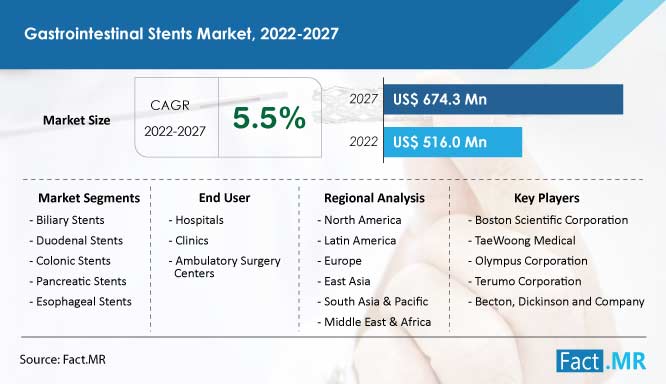 Why are Sales of Gastrointestinal Stents Rising Steadily?

Several technological innovations, including the development of bio-absorbable stents and stents made of nitinol materials with high flexibility and kink resistance, are boosting gastrointestinal stents industry growth.

Globally, the cost of healthcare has increased significantly in recent years, as have the costs of medical devices such as gastrointestinal stents.

In developing countries, healthcare providers and players have limited financial resources to invest in such an expensive surgery. One of the main causes of patients' and doctors' reluctance to gastrointestinal stents is the fact that respective government reimbursement for endoscopic stenting procedures is either limited or non-existent in most Asian countries.

It is predicted that the expensive price of gastrointestinal stents and the lack of funding in developing nations will deter patients from pursuing these therapies.

Corrodible metals, polyester, polycarbonates, and other biodegradable materials are used to make biodegradable stents, which are further used to treat coronary artery disease. Medication-eluting stents can prevent occlusion rates from rising by preventing occlusion not only through radial expansion but also by targeted drug delivery to tissue.

Which Regions are Profitable for Suppliers of Gastrointestinal Stents?

North America currently dominates the gastrointestinal stents market and is predicted to do so over the next five years as well.

Substantial demand for gastrointestinal stents in North America is a result of the high rate of the senior population, favourable reimbursement policies, increasing prevalence of obstructive gastrointestinal illnesses, and the existence of major market competitors.

During the projected period, the Asia Pacific market is anticipated to expand at the fastest rate. Rise in gastrointestinal stent sales is anticipated to be fueled by factors such as the rising incidence of stomach cancer.

The availability of cutting-edge medical treatments at minimal expenses in some nations has led to a burgeoning medical tourism industry in the region, which increases the number of patients in the region. As a result, Asia Pacific's need for gastrointestinal stents is anticipated to rise greatly during the projection period.

What Makes the United States a Leading Market for Gastrointestinal Stents?

The third most common cancer to be discovered in Americans is colorectal cancer.

To raise screening rates, there have been numerous public and commercial initiatives. These activities have led to a progressive increase in the proportion of persons aged 50 to 75 who have recently undergone screening.

The market for gastrointestinal stents is expected to expand steadily over the forecast period due to the presence of a sizable patient pool, as well as favourable government initiatives and reimbursement policies.

Why Will China Be a High Growth Market for Gastrointestinal Stent Suppliers?

In China, gastrointestinal-related disorders are commonly seen among the very young and older population, this may be due to improper diet and poor digestion system.

Furthermore, it is anticipated that over the projection period, the gastrointestinal stents market would provide high potential growth possibilities due to the urgent need to reduce the high incidence rate of gastrointestinal illnesses and technological upgrades to the healthcare infrastructure.

Why are Biliary Stents High in Demand?

A long, tube-like structure called a bile duct helps bile fluid drain from the body. Biliary stents sometimes referred to as bile duct stents are used to treat conditions that block the bile duct. Stents for the bile duct can be composed of polymer or metal.

Biliary stents are put into the lumen or duct to maintain the opening and allow for the best possible outflow of the bile. Food digestion depends heavily on bile fluids, which are produced by the liver into the intestinal channel through a bile duct that opens in the intestine.

The accuracy level of ERCP and PTC tests has increased due to technological improvements and efficient diagnosis methods.

Furthermore, several serious gastrointestinal illnesses, including pancreatic cancer, bile duct, liver cancer, gall stones, and radiation therapy, can result in bile duct abnormalities. Also, it is predicted that the market would expand strongly during the forecast period due to the rise in patient care management and the rise in pancreatic cancer.

Demand for biliary stents is also being driven by an increase in surgical operations, malignant biliary blockage, biliary stricture, and bile duct leakage. Sales of biliary stents are expected to expand at a CAGR of 6% during the forecast period and reach a valuation of US$ 313 million by 2027.

At what rate is the global gastrointestinal stents market expanding?

Global gastrointestinal stent sales are estimated to increase at a CAGR of 5.5% from 2022 to 2027.

At present, what valuation does the gastrointestinal stents market enjoy?

The global market for gastrointestinal stents is currently valued at US$ 516 million.

What is the global gastrointestinal stents market predicted to be valued by 2027?

By 2027, worldwide gastrointestinal stent demand is anticipated to reach US$ 674.3 million.

Demand for gastrointestinal stents in China is predicted to expand at a high CAGR of 9% and reach a valuation of US$ 145 million by 2027.

Which type of stent is most widely used?

Biliary stent sales are predicted to increase at 6% CAGR and reach US$ 313 million by 2027.

Which are the top firms in the global gastrointestinal stents market?