Demand for esophageal stents in hospitals is expected to rise faster at 6.2% CAGR. For better patient outcomes, hospitals invest considerably in advanced esophageal stents. Because hospitals perform enteral procedures, a bulk of the patient population favor these settings over alternative healthcare facilities.

“Rising Prevalence of Esophageal Cancer across the World”

According to Fact.MR, a market research and competitive intelligence provider, worldwide sales of esophageal stents are projected to increase at a healthy CAGR of 5.6% from 2022 to 2027.

Esophageal stents are flexible mesh tubes that are inserted into the narrowed part of the esophagus to widen the food flow and improve nutrient absorption. These stents are intended to enlarge the esophageal muscles and are typically constructed of metal. Some stents for treating restricting tumors in esophageal cancer are constructed of silicone or plastic. Bypassing an endoscope via the patient's mouth and utilizing X-ray guidance, these stents are implanted. 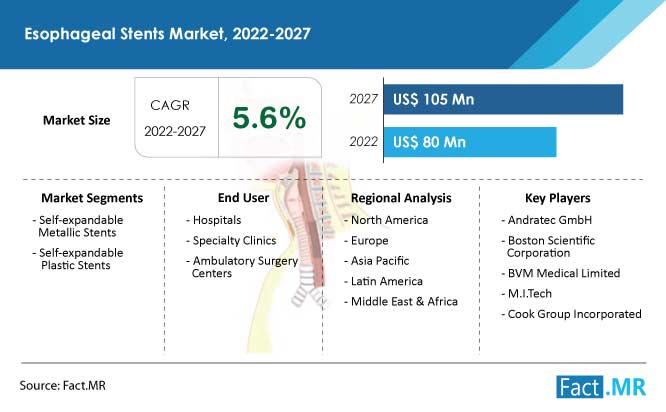 Why are We Seeing Steadily-Rising Demand for Esophageal Stents?

Minimally-invasive techniques are often used to treat diseases such as esophageal cancer. As a stenosis treatment, minimally-invasive surgery is performed using non-vascular esophageal stents. Without performing any surgery, this method uses the imaging system to direct tools inside the patient's body.

Because more surgical procedures are being performed to address various vascular and non-vascular illnesses, the use of esophageal throat stents is becoming more common. Because researchers are concentrating on the development of high-quality materials, there is a growing need for novel and inventive minimally-invasive artery stenting or intervention. During the process, these materials provide the stent with superior support, tracking, and flexibility.

One of the main factors driving market growth is the rising prevalence of various types of cancers among the population. Another factor influencing market expansion is the increasing introduction of innovations and research in the healthcare sector to improve diagnostic technologies. The ageing population, rise in lifestyle diseases, and increased personal disposable income, are the factors anticipated to drive market expansion.

Market expansion may be hampered by elements, including high costs and complications associated with stents. Strict medical device approval regulations are expected to impede market expansion. Market growth rate will be further slowed down by unfavorable reimbursement circumstances in developing and underdeveloped economies.

A lot of patients need to have their stents replaced because of malfunctions and other related issues. The growth of the gastronomy industry can be hampered by complications related to procedures.

How Can New Companies Carve a Space for Themselves in This Industry?

Many medical problems make it difficult for individuals to swallow because they restrict a section of the esophagus. Esophageal stents allow food and liquids to pass by opening the esophagus. Start-ups are working on stents that can adjust and fit the anatomy of each patient.

A new entrant based in the U.S. called Thoracent offers pulmonology-specific medical equipment. BONASTENT is a self-expanding metallic esophageal stent produced by the company. It has a nitinol hook and cross-wire design that allows for anatomical customization. Its radial and returning forces are also ideal for great conformability.

A significant portion of the worldwide esophageal stents market is expected to be dominated by North America during the forecast period due to the rising incidence of intestinal cancer, the increase in the introduction of efficient stent devices, and rising investments by major manufacturers in research and development activities.

How is the U.S. Esophageal Stents Market Shaping Up?

“Higher Awareness of Management & Treatment of Gastrointestinal Disorders in the U.S.”

Due to the rising incidence of both malignant and benign illnesses, there is a rising demand for esophageal stents in the United States. This stimulates key manufacturers to create and introduce new goods, which will ultimately aid them in growing their market shares and geographic reach.

The drivers fueling market expansion are significant research and development practices, and growing awareness of the management and treatment of gastrointestinal disorders.

The third most commonly diagnosed type of cancer in the United States is colorectal cancer. The U.S. market is expanding because of favorable regulations, the presence of prominent esophageal stent suppliers, new product releases, the adoption of cutting-edge technology, and rising demand for gastrointestinal stents.

Why is China a Highly Lucrative Market for Esophageal Stent Suppliers?

The esophageal stents market in China is anticipated to increase at a CAGR of 9% from 2022 to 2027 due to the rising incidence of stomach cancer. Additionally, the expanding medical tourism sector would promote the development of the industry because it offers highly advanced medical care at a reasonable price.

Why are Self-expandable Metallic Stents Most Widely Used?

In comparison to plastic stents, self-expanding metal stents have a reduced risk of recurring obstruction and a longer duration of patency, which has led to an increase in demand for these devices for the treatment of malignant bile duct obstruction.

The popularity of stenting treatments utilizing self-expandable metal stents is rising as a result of the launch of cutting-edge next-generation coated metallic stents (SEMS). Due to the increasing incidence of esophageal cancer, the demand for SEMS likely to increase over the coming years.

The use of SEMS has many advantages, including improved patency to stop tissue ingrowth following the stenting procedure. This pushes several manufacturers to produce SEMS rather than self-expandable plastic stents (SEPS).

Benign intestinal leaks and perforations are treated with self-expanding metal stents. These stents serve as a support to maintain the digestive tract open and allow for simple, unhindered outflow of food and liquids.

Which End User is Expected to Generate High Revenue for Market Players?

The most popular facility to perform minimally-invasive operations for gastrointestinal illnesses is still a hospital. The need for esophageal stents in hospitals is being driven by the availability of advanced infrastructure and the presence of skilled healthcare professionals.

Sales of esophageal stents in hospitals are expected to rise at a significant CAGR over the forecast period due to the high volume of endoscopic procedures performed for a variety of disease indications, favorable reimbursement policies, and increased initiatives by government organizations to provide high-quality treatment for digestive disorders.

Top companies in the esophageal stents market are implementing a variety of tactics, including capacity expansion, product innovation, acquisitions, mergers, and partnerships. These initiatives have allowed them to expand their business and customer bases. Increasing R&D spending by top market participants is supporting market expansion over the forecast period.

What is the growth rate of the global market for esophageal stents?

What is the valuation of the esophageal stents market?

The market for esophageal stents is currently valued at US$ 80 million.

What is the projected market value for esophageal stents?

Sales of esophageal stents are predicted to reach US$ 105 million by 2027.

Who are the key manufacturers of esophageal stents?

Gastrointestinal Stents Market expects a market valuation of US$ 674.3 million by 2027. Sales of gas...