The global massive MIMO market is estimated to be valued at US$ 7 Bn in 2021. As countries across globe are deploying 5G technology, the adaptability rate is gaining the pace. Industries are showing positivity framework towards high-speed Internet, which has brought in more investments in this field. Growth of the massive MIMO industry through 2031 is projected to surge at a CAGR of 26.1% and reach a market value of US$ 71 Bn.

As per the research, historically, from 2016 to 2020, global massive MIMO market size experienced growth at 18% CAGR by value, wherein, the U.S., China, Japan, Germany, and U.K. held significant shares in the global market.

As mobile penetration is increasing, demand for high-speed Internet services is on the rise. In 2020, smartphone penetration increased almost 45% across the global population. The market is forecast to expand at a significant CAGR of 26.1% by value over the coming 10 years.

As demand for high-speed Internet is rising as both, commercial and residential services are increasing, there has been robust growth in data usage. This is driving higher demand for massive MIMO.

Over the years, the Internet has established itself as an essential need amongst every end-use industry, and is considered as a powerful tool to transform a business. In today’s globalized world, the Internet has emerged as a prominent communication tool and source of information across verticals. Technological advancements in the massive MIMOs market, mobile & communication technology, and use of social media have given a boost to demand.

In the past few years, the wold has witnessed the unfolding of many such technologies that are likely to take the utilization of 5G to its zenith. The 5G massive MIMO market is one such sector. It utilises the benefits of massive MIMO technology and provides uninterrupted high-speed 5G data transfer, which increases the efficiency of the network.

As per Fact.MR’s comprehensive massive MIMO market research report, it is projected that the 5G market is likely to account for almost 40% of the market share. The 5G segment value is estimated to reach around US$ 28 Bn by 2031.

5G is expected to provide highest growth opportunities over the coming years. With new emerging designs of 5G NR networks, MIMO becomes massive with 100s of antennas crucial for harnessing its full potential. It is an extended version of conventional MIMO that works by adding a large number of antennas to the base.

Evaluating the adoption rate, demand for massive MIMO systems is likely to cover significant share of the overall market over the coming 10 years. 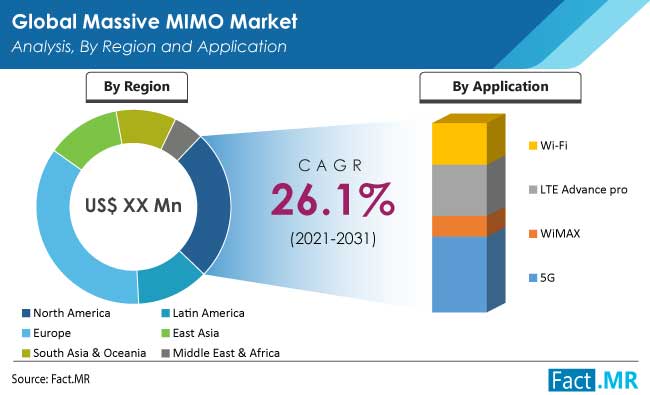 Associated Benefits of Massive Multiple-In Multiple-Out Technology and Which Industry May Benefit the Most!

Because of technical advantages in massive MIMO, it is likely to be a key enabler in the field of telecom, IT & services, and military. Massive MIMO systems require higher number of advanced antennas and complex algorithms. Though MIMO technology has been in use since long, the target technology enhances speed, connectivity, and user experience.

Large number of advanced antenna systems for 5G massive MIMO aids in focusing the energy at the single point instead of a diverging one. Prominent advantages of massive MIMO can be summed up in the following points.

Improved Coverage: By the use of this technology, users enjoy the most uniform experience across a wide range of networks. This enables high data rate services everywhere.

Beamforming in the technology is called 3D beamforming, which enables dynamic coverage since users are moving either by walking, vehicles, or connected vehicles. This adjusts the coverage according to their location. In addition its ability to serve multiple users at the time is driving demand for multi-user MIMO (MU-MIMO).

Increased Network Capacity: Total volume of data that is being served to users along with the maximum number of users that the technology can serve is known as capacity of network.

The target technology enables high capacity by enabling 5G NR, which is deployed in the frequency range of sub-6 Ghz. Similarly, deploying multi user MIMO enables the service to be availed by many users at the same time.

Enhanced User Experience: As the above two mentioned factors increase, user experience also increases eventually. In terms of high-speed uploading and downloading is leading to mass adoption of massive MIMO.

What are the Restraints being Faced by the Massive MIMO Industry?

High price of spectrum distribution is a prime concern in every region. It highly depends upon government policies, which generally falls into higher tax ranges.

Investments associated with infrastructure building results in loss for a longer period. Where the telecom industry faces cut-throat competition in the market, investing and sustaining becomes a great concern for market players.

Lack of TDD spectrum is also a likely point of concern for TDD-based massive MIMO technology. Currently, traffic is unevenly distributed between end user terminals and base stations. Whereas, FDD provides same channel size on both directions of the network. Massive MIMO experiences higher traffic at the downlink side.

As demand for high-speed Internet is increasing, FDD-based massive MIMO technology is poised to hold a smaller market share over the coming years.

Why is the U.S. a Global Leader for Massive MIMO and Enjoys High Adoption Rate?

In North America, the U.S. is estimated to enjoy the highest share, as its market for massive MIMO is presumed to reach almost US$ 1.7 Bn in 2021.

The United States massive MIMO market is seeing robust demand because of some of the world’s largest IT and & services firms present in the country, such as Goggle, Amazon, Facebook, etc.

Also, being an early technology adopter, the large population in the country has access to smart devices, which increases in-house demand.

Which Countries are Leading the Deployment of Massive MIMO at the Global Level?

China: China is the world’s second-largest economy, while having the presence of telecom industry leader Huawei in the country. Over the years, the country has witnessed massive infrastructure development in the telecom sector. The market in China is expected to reach around US$ 13 Bn by 2031.

Germany: Germany is the largest economy in Europe and sees high demand in the connectivity and Internet sector. The Germany massive MIMO technology market is expected to rise at a CAGR of almost 23% over the forecast period. Technology adoption is higher owing to the presence of technology giants in the country.

Why Does Wi-Fi Application Uphold High Demand across the Globe?

Residential as well as small commercial spaces have high demand for Wi-Fi. As Internet penetration is increasing along with more modernisation, penetration of massive MIMO for Wi-Fi use is also increasing. The segment is expected to hold a little less than 25% global market share.

What is the Scenario of Massive MIMO Use in Military?

Military has always been the first user or inventor of prominent technology. In fact, the Internet was first introduced for use by the military. Military deals with high data transfer and large path transfer. Thus, this sub-segment holds a prominent market value and is expected to increase its revenue 3X over the forecast period. 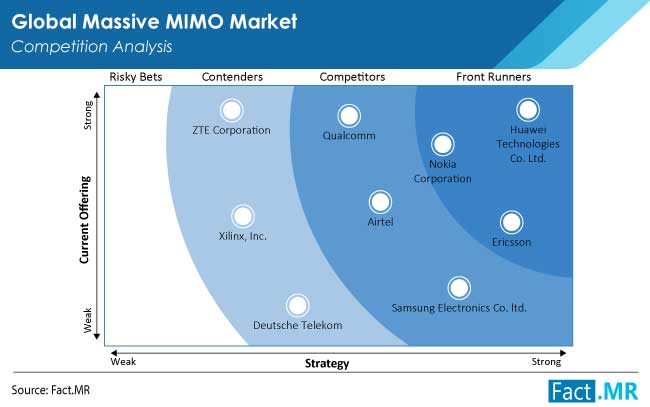 Recent developments related to companies offering massive MIMO have been tracked by the team at Fact.MR, which are available in the detailed report.

How much is the current valuation of the massive MIMO market?

The global massive MIMO market was valued at more than US$ 6 Bn in 2020.

What is the deployment forecast for massive MIMO?

What was the last 5 year’s market CAGR for massive MIMO?

What are the massive MIMO market trends that are fueling growth?

Introduction and adoption of 5G networks is the technology that is going to utilize massive MIMO for harnessing its full potential.

What is driving demand for massive MIMO?

What is the market share of top 3 providers of massive MIMO?

Which are the top 5 countries driving demand for massive MIMO?

What is the demand graph for FDD spectrum in massive MIMO?

Massive MIMO using FDD spectrum is expected to rise at a CAGR of 27% during the forecast period.

At what percentage is deployment of massive MIMO projected to register growth in South Asia & Oceania?

Rich communication services market expects to grow at a CAGR of 14% by 2031. Rising media sharing, v...

The global satellite communication market to expand steadily at a CAGR of 9.4% and is expected to be...

All-electric satellite market is estimated to grow at a dexterous CAGR of over 11% during the foreca...