Railway traction motors are electric motors that generate power for a train's rotating wheels. They have a sealed structure that prevents dust penetration and necessitates less upkeep and are better accessory devices, such as cooling fans to reduce noise. Railway traction motors are extremely reliable since the stator is integrated using high-frequency heating. As a result, these motors are widely used in electric, diesel-electric locomotives, and electric multiple units (EMUs) all over the world.

Due to their great weight and lengthy service life, railway coaches need engines that are robust, durable, and capable of sustaining significant mechanical force. Railway traction motors offer the much-needed power required for the proper operation of the railway coach.

Currently, there is an increase in the expansion of the railway network globally, which aids in the transportation of products and commodities across longer distances than roadways. This is one of the primary reasons driving the demand for railway traction motors.

Traction motors have several advantages, including a small design, high power efficiency, and long life. This, combined with various measures taken by governments of various nations to promote the use of electric motors, is encouraging the growth of the railway traction motors market.

Moreover, the electrification of railway networks and the conversion of traditional diesel locomotives to electric locomotives are increasing.

Furthermore, the rising use of high-capacity lithium-ion batteries in rolling stock and traction power is providing lucrative growth prospects for key market participants. These participants are heavily spending on research and development (R&D) initiatives to improve railway systems, allowing them to grow overall sales and profitability.

Several governments and authorities throughout the world are encouraging e-mobility to reduce carbon emissions and reliance on internal combustion engines. Electric vehicles not only promote cleaner e-transportation, but they also serve to reduce the need for fossil fuels.

Why is Demand for Railway Traction Motors Intensifying?

The railway is a favored and more cost-effective option for the mass movement of commodities and products across greater distances. Moreover, technological improvements have enhanced the performance of railway engines and motors in terms of safety and speed.

Traction motors' various advantages, such as power efficiency, compact design, and durability, promote their usage in railways. As a result, traction motors have become an important component in railways.

Traction motors allow for the easy delivery of power to the locomotive wheels, culminating in the railways' initial slow motion. Then, to obtain more speed, more power is used. Consequently, the safety of the cargo and the crew and passengers onboard the locomotive are not endangered, ensuring the safe delivery of the products.

Such technological breakthroughs are expected to aid the demand for railway traction motors in the next ten years.

Due to the traction motors' compact design, high durability, and reliability, the procedures involved in creating and manufacturing them necessitate cutting-edge equipment and technology.

As a result, the heavy investment costs related to the creation and installation of traction motors pose significant difficulties for manufacturers. 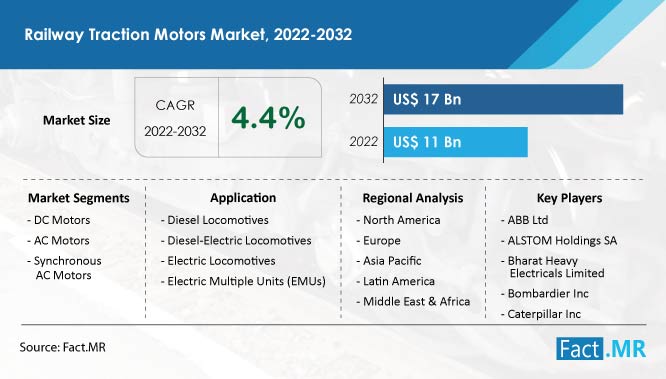 Asia Pacific captured 48% of the global market in 2021. The demand for railway traction motors in Asia Pacific is significantly high due to the expansion of transportation infrastructures, such as railway connections, metro rail systems, and high-speed bullet trains.

Moreover, Japan and South Korea are major markets in Asia Pacific due to the increased investment in railway projects, particularly high-speed rail and metro trains.

Europe is expected to hold a significant market share as the region makes substantial investments in developing railway technology. The market for railway traction motors in Germany is predicted to expand rapidly during the projection period. Germany is taking steps to increase the number of rail passengers and move more freight to railways by 2030.

What is the Growth Outlook for Railway Traction Motors in the United States and Canada?

The United States is expected to remain a leader in North America during the forecast period. The existence of a large number of manufacturers in the country, as well as their ongoing efforts in producing superior traction motors, has helped the market tremendously. Moreover, large-scale urbanization and growing efforts to electrify passenger railways have also offered major momentum to the adoption of railway traction motors in the United States.

Canada is projected to follow the United States in terms of growth. Canada is also a key market for railway traction motors, but it is currently increasing at a slower rate than the United States. This is due to the country's inadequate electrification of rail networks.

Nevertheless, increased passenger traffic on Canadian rail services has compelled railroad firms to invest in new railway equipment, such as railway traction motors. This is expected to help the Canadian market maintain a stable pace over the decade.

Why are AC Motors Most Widely Deployed?

AC motors are the most popular type. AC motors have several advantages, including the fact that they are simple to manufacture and are lighter when compared to DC motors for an equivalent amount of power. Moreover, AC motors are more durable and easier to maintain than DC motors.

AC motors can be created and built for application-specific machinery and automotive based on the motors utilized for traction, such as induction or asynchronous. In the current scenario, AC motors are most extensively employed in applications such as railways, electric vehicles, industrial machines, and conveyors.

The global railway traction motors market is valued at US$ 11 billion in 2022.

Global demand for railway traction motors is estimated to reach US$ 17 billion by 2032.