Recently released bio-based acetic acid market analysis by Fact.MR, a market research and competitive intelligence provider, showcases that the market reached US$ 44.1 Mn in 2020, and is expected to be valued over US$ 45.6 Mn by 2021-end.

The bio-based acetic acid industry had shown a decrease in growth during 2020 with worldwide revenues down 1.8% year-on-year. However, owing to gradual recovery and rising demand followed by increasing production, overall revenue is projected to grow 1.6X from 2021 to 2031.

Growth of the bio produced acetic acid market primarily depends on demand generated from food and chemical industries. Substantial increase in the sales of sugar-based bio-acetic acid is also one of the reasons behind overall market growth in terms of value.

The bio-based acetic acid market research performed by Fact.MR delves on key details such as current and speculative production capacity, capacity utilization rates of each producer, price growth and production optimization strategy across value chain and many more.

Referring to the bio-based acetic acid industry research by Fact.MR, market value increased at a CAGR of 2% from 2016 to 2020. Countries such as the U.S., Austria, Sweden, Germany, China, and India held noteworthy share in the market and witnessed over 60% of total consumption in 2020.

How is Demand for Polymer Binders Fuelling the Market for Bio-based Acetic Acid?

Growing utilization of environmentally friendly construction materials has increased demand for bio-based polymeric binders. Polymeric binders are valuable raw materials in the construction and coating industry. By looking into the growing use of bio-based acetic acid for paints & coatings, leading manufacturers are focusing on adopting the biomass balance method to process bio-based products, which will be more suitable for the utilization as binders in plasters and paints.

How Diversified is the Bio-based Acetic Acid Market?

In chemical production, bio-based acetic acid has huge potential as a precursor for vinyl acetate monomer (VAM) production. In 2020, over 75% of bio-based acid was utilized for the production of VAMs.

Bio-based acetic acid consumption for chemical production was over 12,607 MT in 2020, and this is expected to increase at a CAGR of 4.8% over the forecast period.

Future demand in the global bio based acetic acid market is set to escalate in the personal care industry as well. It has been used in the formulation of bundled personal care products including shampoos, conditioners, hair rinses, etc.

Bio-based acetic acid has a strong foothold in the chemical industry, and is slightly diversified in textile, food, and personal care industries. The market is anticipated to diversify at a faster pace over the long-run forecast period.

Why Bio-based Acetic Acid Penetration is Still a Challenge and How to Tackle It?

It is a clear demonstration that the transition from a fossil fuel-based economy into a bio-based economy is expensive, which requires a huge amount of resources and capital, and most importantly, is time-consuming.

Burgeoning bio-based economy, where traditional sources of feedstock can be replaced by biomass, will incrementally grow in complexity and size. Analysing every aspect of sustainability the opportunities are not always clear. Therefore it is recommended that a true valuation be placed on biomass for future use.

Hemicellulose and lignin, cellulose, as well as other plant materials, are valuable assets and companies should explore the potential opportunities to maximize the economic, environmental and social benefits of different methods for their use.

South Asia and Oceania, led by India, is anticipated to rise at a CAGR of 4.8% during the forecast period. South Asia Oceania’s market has growth potential in terms of production growth, but in terms of consumption, the region has a nominal growth prospective compared to Europe and North America.

East Asia is one of the potential markets for bio-based acetic acid. The region witnessed over 7,551 MT consumption in 2020, and is anticipated to rise at a CAGR of 4.9% over the forecast period. 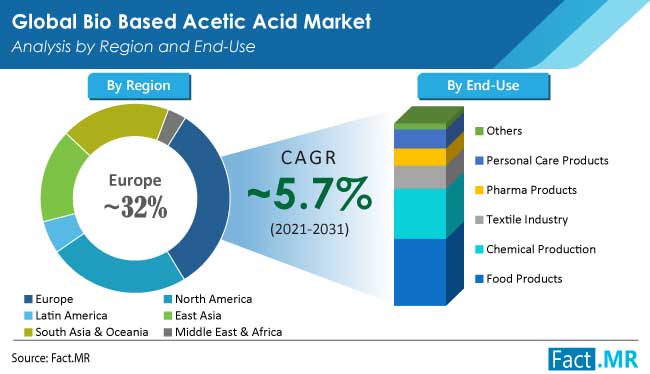 Why is the U.S. a Global Heavyweight for Bio-based Acetic Acid Demand?

How Has Bio-based Acetic Acid Demand Been Shaping across Established & Evolving Markets?

China: China is one of the most prominent markets for bio-based acetic acid both in terms of production and consumption. Although, considering the past 4 years statistics the country had grown at a moderate pace with a CAGR of 1.4%.

But owing to the fact such as overall acetic acid market growth, an increase in the consumption of acetic acid in bio-based VAM production, the country is expected to grow at a CAGR 5.2% during the forecast period. China bio-based VAM demand had increased at a CAGR of 5.2%, and is expected that the demand will increase at 6.7% CAGR over the forecast period.

Austria: Austria is a prominent market for bio-based acetic acid in Europe. Lenzing AG is a manufacturer responsible for large production of bio-based chemicals in the country, which includes acetic acid as well. The country holds over 20% of the overall market share in Europe.

How Does Growing Consumption of Vinegar Increase Requirement for Bio-based Acetic Acid?

Upsurge in demand for vinegar for cooking, baking, cleaning, and weed control applications has increased the utilization rate of bio-based acetic acid. Vinegar typically consists of 4-7% of acetic acid and is considered as the main ingredient after water.

It has been observed that vinegar intake reduces blood sugar level and insulin level after a meal. Also, it helps to reduce cholesterol in certain cases, in weight management, and in treating several physical ailments including nail fungus, warts and ear infections which can be treated by vinegar.

These benefits of vinegar coupled with rising consumer consciousness regarding bio-based content in food products such as vinegar will bolster demand for bio-based acetic acid.

Which is the Most Convenient Source Adopted by Manufacturers to Produce Bio-based Acetic Acid?

How is Availability of Substitutes Hampering Sales of Bio-based Acetic Acid in the Textile Industry?

Moreover, depending on pH, formic acid has proven more efficient than acetic acid, especially for the use of printing recipes, additives, thickening agents, etc. Additionally, BIOCID-NV is an organic acid that acts as a replacement for acetic acid in the textile industry. The iconic property of the organic acid not only has the function of pH adjustment but also can be used in neutralization, finishing, etc. 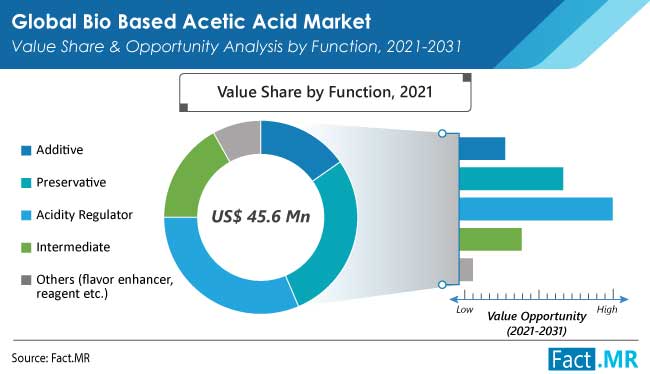 Majority of companies discussed in the report have focused on developing a method for processing cost-effective bio-based chemicals and are expanding their supply chain in developing regions.

Similarly, other recent developments related to companies manufacturing bio-based acetic acid have been tracked by the team at Fact.MR, which are available in the full report.

Fact.MR has provided details about the production capacity of all manufacturers coupled with crucial information regarding product supply, such as a list of distributors, distributor level pricing, and key consumers.

Bio-based acetic acid as acidity regulators is the major area of usage, and this trend is anticipate to drive sales during the forecast period.

Growing production of vinyl acetate monomers (VAM) stands as the core driver for the market.

Top 5 manufacturers of bio-based acetic acid account for around 85% share in the market, as per ratings on the basis of market share, market reach, clientele, etc.

North America accounted for over 24% of global bio-based acetic acid demand in 2020.

The market in Latin America will expand at 3.3% CAGR, where Brazil accounted for the largest market share in 2020.