The right automotive radar technology needs a significant breakthrough if it is to overcome hideously difficult, onerous and time consuming limitations of self-driving. Cutting-edge and specialized automotive radars that can sense and seamlessly adapt to an automobile’s surroundings to navigate notorious traffic congestions could be the key that gives leading automotive radar stakeholders an edge in the market. 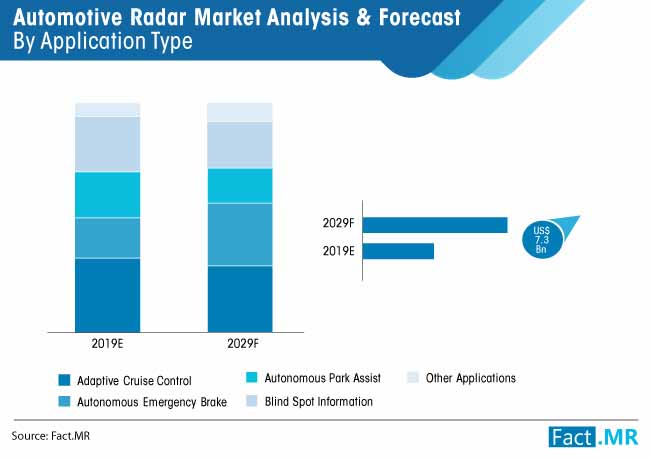 Modern day automotive radar systems have already crossed the hurdle of limits in field of view and range, with multiple antennas, thus giving way to adaptive cruise control. Self-driven vehicles however, need something that not only overcomes weather interferences but also an automotive radar that is more compact. With innovations abound, start-ups are promising automotive radars with infinite possibilities.

These radars are smaller, spherical and akin to radars used in fighter aircrafts. When these radars are placed on self-driven vehicles, they offer a 360-degree view of the landscape with an astonishingly consistent performance.

With a fully functioning autonomous car ready to enter the market in the next 3 to 8 years, the right automotive radar technology would not only covet the important aspect of safety in all self-driven vehicles but also commercialize automotive radars based on spherical antenna technology.

Most autonomous vehicles have sensing suites that have three types of sensors namely – Lidar, Radar and Camera. Each of these systems have their own unique functionalities and limitations.

For instance, both Lidar and Camera lose their potency in overcoming stark environmental conditions like darkness, pollution, snow, rain and fog. Radar on the other hand has immense potential in maintaining its functionality in sub-par weather and lighting conditions.

However, its low resolution puts it at a significant disadvantage making it unable to identify small objects and also enhancing its susceptibility to false alarms. By innovating and introducing an ultra-high resolution technology such as 4D imaging, the missing link can be overcome thus revolutionizing autonomous vehicle development.

Alternatively, it will also ramp up the production of level 3 autonomous vehicles, with an automotive radar that encompasses all safety features like risk assessment, path planning and a frictionless driving experience for the driver and passengers.

Competitors in the market could gain an edge on affordability by developing sensors that have proprietary chipset technology and research capabilities for optimal automotive radar performance. 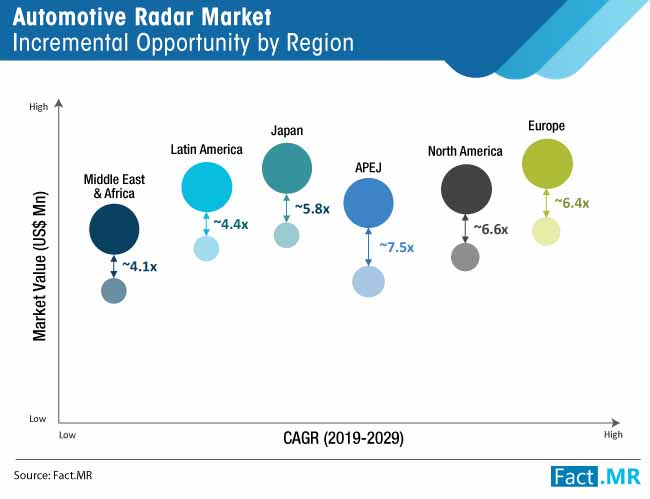 It is important to note that automotive radars are being chiefly deployed to give the driver a safe navigational experience and also to mitigate risk associated with road fatalities, casualties and accidents.

Towards this, a plethora of regulatory initiatives have come to the fore, stringently imposed by governments. Europe has recently championed and prompted a staunch regulatory framework that empowers its roads to become the safest in the world. As European governments popularize the utilization of autonomous vehicles, the automotive radar market will gain immense traction over the forecast period.

The advent of automotive radar technology will fulfill the prime objective of zero-fatalities on the roads. Proliferation of Advanced Driver Assistance Systems (ADAS) has been possible due to improvements in radar technology.

ADAS systems are also likely to become government mandated in the near future with recently introduced legislations such as emergency brake assist and the increased adoption of rear view facing cameras.

Automotive radar based safety systems are paving the way for blind spot and side impact detection along with radars which have mid-range and long-range features for adaptive cruise control. This has been made possible with the help of embedded technology.

For instance, new and improved embedded MCUs and 77 GHz mm wave integrated circuits that are specifically designed for radar uses and applications. Thus embedded technology is acting as a force multiplier to the already existing arsenal of intriguing ADAS solutions.

In the year 2017, Robert Bosch entered into a collaboration with Tom Tom to launch a unique HD map with an integrated radar road signature layer for the localization of vehicles in autonomous driving. It has also showcased its prowess in research and development that has enabled it to come out with innovative products and solutions.

Bosch has partnerships with myriad universities and research institutes with a keen focus on information technology and sensors. It has also procured proprietary patent rights for all its products thus giving it an edge.

It is said that the company has employed nearly 60,000 individuals who are purely focused on the company’s R&D activities. The company also leverages its growth with its profoundly strong operational network that efficiently serves its humungous customer base.

The meteoric rise of Continental AG has been its single minded focus on providing scalable and innovative protection systems for vehicle occupants as well as ADAS that uses automotive radars to fulfill safety and comfort functions. The company has smartly strategized its expansion by entering into agreements with other players in the market.

Continental signed an agreement with Nexteer automotive in the year 2017 in a joint venture focused on the development of motion control systems and actuator components for automated driving.

It also entered into a partnership with AND to enrich map and location data with the requisite sensor data collected from vehicles. Its biggest strength has been its ability to multiply by leaps and bounds in all the major markets of the world thus mitigating the risk associated with overdependence on only one region.

It provides automotive parts with operations in about 46 different countries of the world with Europe accounting for a major chunk of the company’s total revenue.

Automotive Metal Wheel Market is expected to record approximate market sales of US$ 92 Billion by th...

Automotive injector nozzle market is estimated to surpass around US$ 5.7 Billion by 2022 end. Passen...