Overall, the industry is expected to expand almost 3x throughout the 2021-2031 forecast period. Preference for organic Greek yogurt will remain prominent, capturing a revenue share worth 45%.

The worldwide Greek yogurt market expanded at a CAGR of 8.1% during the historical period 2016-2020. Increased consumer popularity due to its excellent nutritional value and use as a basic component in a number of popular dishes was regarded as one of the key elements that fueled expansion.

During the COVID-19 pandemic, sales temporarily contracted, especially during the first two quarters. This was attributed to logistical difficulties experienced with regard to raw material procurement amid tight lockdowns. However, this eased as restrictions were lifted and consumers began relying on online purchases.

The global market for Greek yogurt is anticipated to witness impressive growth during the 2021-2031 forecast period, expanding at a CAGR of 11.1%. Consumers' growing health consciousness and dietary preferences are prompting a shift toward healthier, more nutrient-dense foods boosting Greek yogurt popularity.

How is the Versatile Nature of Greek Yogurt Spurring Sales across Key Regions?

Greek yogurt, alternatively known as concentrated or strained yogurt, is made by eliminating the whey and other liquids from normal yogurt. While traditionally meant to be a breakfast snack, Greek yogurt is being increasingly incorporated into other meals. Moreover, it is a favorite of culinary enthusiasts looking to enhance food flavor.

In recent years, Greek yogurt is being deployed across smoothies to impart a protein rich base, thus enhancing nutritional value. Also, it has been found to enhance creaminess of soups and as a savory spread for burgers and patties such as corn basil cakes. As a dessert topping, Greek yogurt is also consumed as popsicles, or as cakes.

Given this highly versatile nature of Greek yogurt, prominent food companies are introducing various formats to be used for multiple applications. For instance, Epigamia, an Indian company, offers Greek yogurt in various flavors, including natural, rose& lychee, vanilla bean, strawberry, wild raspberry, blueberry and mango. These can be either consumed directly or added with other food preparations.

Worldwide, consumers are shifting towards a nutrition friendly diet. Increasing prevalence of fast-paced lifestyles had to the onset of various unhealthy eating habits, causing rising cases of obesity and other chronic diseases. Hence, emphasis on reducing fat and calorie intake has acquired precedence. This has boded well for the Greek yogurt industry.

According to the U.S Department of Agriculture, for one container (156 grams or 5.5 oz) of plain non-fat Greek yogurt, there are 92 calories, 0.265 grams of fat, 56.2 milligrams of sodium, 5.68 grams of carbohydrates, 5.1 grams of sugar and 111 mg of calcium. Furthermore, Greek yogurt is beneficial in improving bone health, reducing the risk of osteoporosis.

What is the Key Factor Enabling Growth in Germany?

The market for Greek yogurt in Germany is expected to develop rapidly by 2031, owing to the rising demand for yogurt-based drinks over sugar-laden variations as a result of increased awareness of lifestyle illnesses such as obesity and diabetes.

Combined with the rising popularity of low-fat Greek yogurt among consumers due to its low calorific value and the health benefits associated with yogurt consumption, is expected to drive market growth over the forecast period.

Furthermore, the higher disposable income, steady GDP, high living standards, and expanding innovations by food and beverage makers such as flavored Greek yogurts, fruit-based Greek yogurts, and so on will drive the expansion of the German Market in the coming years. A CAGR worth 9% is projected for Greek yogurt sales in Germany.

How are Homegrown Greek Yogurt Manufacturers Influencing Sales across the U.S?

In contrast to ordinary yogurt, Greek yogurt appeals equally to men and women in the U.S, and customers are drawn to the creamy product due to its high protein level, especially since protein is the preeminent subject in food marketing. A CAGR of 9.3% is projected for the U.S market.

What is the Scope of Growth for Greek Yogurt Manufacturers in China?

In China, Greek yogurt products need to be more diverse. When more products enter the market, consumers may be more willing to adopt this new category. Currently, the Greek yogurt sector in China is very underdeveloped, with only a few brands on the market, such as LePur and yoGreek produced by Bright Dairy.

Despite the fact that the former is now the most successful Greek yogurt brand in China and the latter is backed by one of China's domestic dairy behemoths, sales volumes of these products are still in the tens of millions RMB per month, accounting for a negligible portion of the overall yogurt market.

In general, the development of Greek yogurt has been momentarily suspended due to its high protein content (typically greater than 6.2%), and its price is roughly three times that of conventional yogurt. However, as consumers become more protein conscious, manufacturers are finding renewed growth opportunities. As per Fact.MR, the region is likely register a CAGR worth 9.8% until 2031. 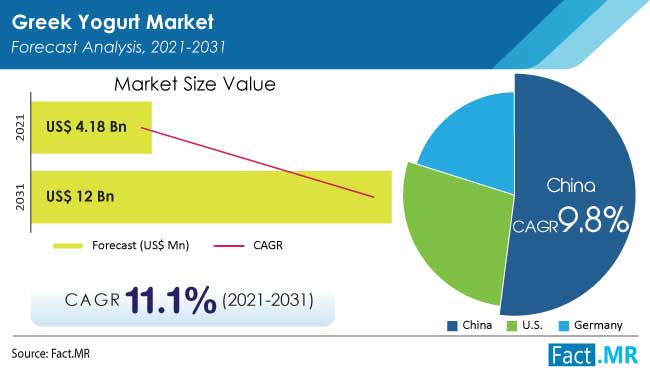 Why is Spoonable Greek Yogurt Consumption Bound to Increase?

By product type, spoonable Greek yogurt is anticipated to remain the top selling product category, expected to account for 3/4th of the global market in the 2021-2031 assessment period. Consumption is rising due to its smooth and glossy texture.

Will Online Distribution Emerge as the New Normal for Greek Yogurt?

The availability of Greek yogurt in numerous retail outlets is projected to fuel the global market's demand. Consumers find it convenient to go to supermarkets to buy food items such as Greek yogurt. As Greek yogurt can now be purchased online, the industry's expansion is likely to be fueled by an increase in smartphone and internet penetration.

According to Fact.MR, the online distribution channel will be the fastest-growing segment, registering a CAGR of 13% from 2021-2031. This trend has especially gained significance against the backdrop of the COVID-19 pandemic, which led to reduced footfalls across conventional brick & mortar stores.

Based on nature, consumption of organic Greek yogurt is anticipated to incline significantly, comprising almost 45% of global market revenue. Heightened awareness about presence of synthetic elements in conventional Greek yogurt is tilting preference towards its organic counterpart.

Manufacturers in the Greek yogurt market will primarily focus on strategic acquisitions, collaborations, and product releases in the following decade.

How much is the global market for Greek yogurt worth?

According to Fact.MR, by 2021, global Greek yogurt market is expected to reach US$ 4.18 Bn

What is the anticipated growth trajectory for the market for Greek yogurt?

What was the last 5 years market CAGR for Greek yogurt?

At what value will the Greek yogurt market likely close in 2031?

What is the scope for Greek yogurt sales across the U.S?

In the U.S, Greek yogurt consumption is expected to register a CAGR of 9.3%

How lucrative are growth opportunities across China?

How opportunistic is the market for Greek yogurt in Germany?

Which is likely to be the most preferred Greek yogurt type?

Which is the most preferred distribution channel for Greek yogurt?

By nature, which is the most preferred Greek yogurt category?

Yogurt Alternative Market is set to witness steady growth by 2029. The rising demand for multifuncti...

Stirred Yogurt Culture Market is set to witness healthy growth by 2028. The rapidly evolving food in...

Yogurt Cup Market is expected to witness steady growth by 2028. Growing trend of innovation in the p...