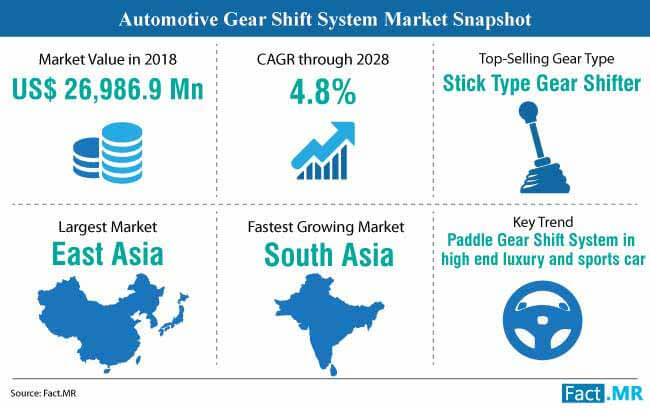 What are the Vital Factors Driving the Growth of Automotive Gear Shift System Market?

What are the Challenges which Need to be Addressed by Stakeholders in the Automotive Gear Shift System Market?

Automobile companies are focusing on the development of new technologies to enhance the performance of manual transmissions. In addition, the burgeoning demand for lightweight commercial vehicles in evolving mobility and ride-sharing services is likely to be a vital factor bolstering automotive gear shift system market growth. Other gear types in joystick, rotary, and stalk type are estimated to find increasing demand in different vehicles based on their utility. Automotive gear shift system market is expected to generate substantial revenues from both OEMs and aftermarket sales.

Automotive Gear Shift System Market Is Anticipated To Grow At CAGR Of 3.7% During The Forecast Period By 2028.

*101 figures and 64 tables includes by FactMR