Consumption of railway HVAC systems accounted for 4%-5% of the global HVAC market in 2021.

Expanding application of HVACs in railways for logistic application and temperature & ventilation control is set to provide lucrative opportunities to manufacturers to surge product penetration.

The market is estimated to create an absolute $ opportunity of close to US$ 2.69 Bn during the assessment period of 2022-2032.

Additionally, the railway air conditioning system market is expected to grow 1.9X during the assessment years due to rising demand from the railway sector across the world.

The global train HVAC system market registered a growth around 3.1% during the historical period (2017-2021), and this squeeze in demand was witnessed due to COVID-19 pandemic. A decline of ~4.2% was experienced in 2020, which affected the demand-supply stance of the market.

Growing demand for railway HVAC from end-use verticles is poised to generate a market valuation of US$ 5.3 Billion by 2032.

Leading manufacturers are spending significant amounts on R&D to improve the efficiency and operation of HVAC systems.

These include technologies for improving air quality and reducing airborne pathogens through the installation of UV light components. UV light has the capability to deactivate bacteria and odors, and aid in the effective working of air conditioning systems.

Moreover, utilization of environmentally-friendly refrigerants such as R32 and R744 is likely to reduce the greenhouse emissions of HVAC systems and improve efficiency in terms of energy consumption. As such, manufacturers have ample of opportunities by working on these technologies to increase product penetration over the years ahead.

Economies of East Asia and South Asia & Oceania, including China, India, Indonesia, Malaysia, and Thailand, are high demand centres in the market. China and India will drive high market development in the near future. East Asia is likely to portray growth at 6.7% CAGR, whereas South Asia & Oceania is estimated to exhibit growth at 7.7% CAGR through 2032. 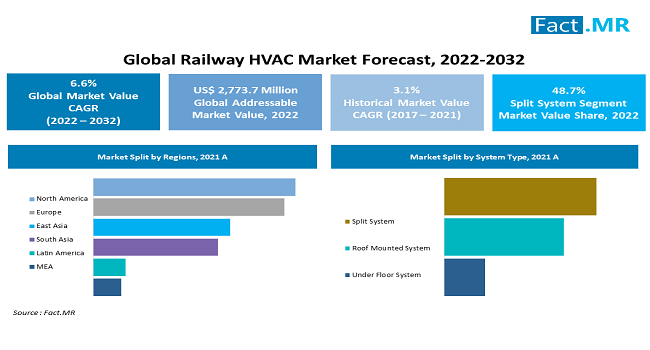 How is Railway HVAC Market Growth Being Driven?

Application of Internet of Things (IoT) technology has increased in various end-use applications over the past few years. This phenomenon has eclipsed conventional technology due to its advanced features and functionalities.

Application of IoT in a HVACs is considered a game-changer because it reduces energy consumption and maintains temperature equilibrium. Additionally, cloud-based monitoring systems aid in tracking people, send signals through IoT, and regulate load capacity.

This is likely to increase demand for HVAC systems from railway industries in the near future, thus supplementing the demand curve.

What May Limit Railway HVAC System Demand Over the Coming Years?

The prices of electronic products have been raised by at least 5% over the last year. This was due to rising cost of raw materials such as iron, copper, and aluminium, and other macro environmental factors across the globe.

Ukraine is considered as a major source of minerals such as copper, and the conflict between Russia and Ukraine could result in the scarcity of these minerals, leading to a rise raw mineral cost.

Wide presence of aftermarket players in the global HVAC market is likely to erode the market share of leading manufacturers across the globe. Some of the aftermarket players provide dynamic offerings in regional markets and are catering to the demand from end-use industries at an optimal cost. This is projected to shift the interest of customers towards regional players. Service providers in the aftermarket are also providing equipment at low maintenance costs.

HVAC systems regulate all functions related to temperature and moisture control in railways and other end-use industries such as automotive, chemicals, and others. Railway HVAC systems need to operate continuously in severe environmental conditions of temperature, moisture, and pressure. Due to this, they are associated with a low lifespan and high maintenance cost.

This scenario is projected to limit demand for HVACs in end-use applications and is likely to shift customers’ preferences towards alternative technologies over the years ahead.

Which Region Illuminates Exceptional Growth in the Railway HVAC Market?

Growth of the railways in China is anticipated to open new doors for HVAC manufacturers. Additionally, the government is highly focused on expanding its rail line network, and this would directly surge product demand.

According to Fact.MR research, sales of railway HVACs in China accounted for 36.7 ‘000 units in 2021, which is likely to increase at an optimistic CAGR of 5.9% over the assessment period.

The market in China is projected to surpass a valuation of US$ 640 Mn by 2032 and is projected to create an absolute $ opportunity of US$ 316.2 Mn over the assessment period.

The Asia Pacific market is predicted to reach new heights in railway development, resulting in magnificent growth and a higher share in the railway HVAC market.

India is likely to lead the South Asia & Oceania market by accounting for approximately 17.4% market share. The India railway HVAC market is projected to account for US$ 184 Mn by the end of 2032, expanding at a significant CAGR of 6.7% over the decade.

Which Train Type is Expected to Account for Highest Demand for Railway HVACs?

The global railway industry has witnessed remarkable growth over the past few years, since passengers prefer trains as a primary form of mass transportation across the globe. Additionally, a considerable number of commuters have been frequently crowding train carriages during peak hours across all prominent regions.

Passenger trains captured more than 84% market share in 2021, and the segment is expected to expand at a CAGR of 6.6% during the forecast period.

Locomotives trains, including electric and diesel, account for nearly 16.8% market share, and are likely to reach a market value of US$ 870 Mn by the end of 2032.

A collaborative approach with the railway industry has become one of the most important strategies followed by various manufacturers, aiming to establish a strong customer base in the market. Few market players have strengthened their customer base by streamlining their product lines as per end-use (railway) demand.

These strategies are likely to benefit players in terms of strengthening their annual sales volume and capturing a larger share in the market. In addition, this strategy will help manufacturers develop an innovative product range for the railways and other end-use industries.

Moreover, railway HVAC system manufacturers are likely to undertake organic growth strategies through an entrance into their distribution channels for HVAC temperature control systems to strengthen their profit margins.

Railway HVAC system demand is anticipated to reach US$ 5.3 Bn by 2032-end.

Some of the prominent players in the railway HVAC market are Hitachi, Siemens Mobility, Toshiba Infrastructure Systems and Solutions Corporation, Trane Technologies, and Mitsubishi Electric Corporation.

Split HVAC systems hold around 48% share in the global sales of railway HVACs.

*163 figures and 98 tables includes by FactMR