The melanoma cancer diagnostics market is being driven by a growing emphasis on early detection and prevention, with global revenue exceeding US$ 800 million in 2018.

Melanoma is a type of skin cancer developing from pigment-containing cells known as melanocytes. Melanoma cancer diagnostics is to diagnose melanoma with biopsy.

During a biopsy, all or the part of mole or growth over the skin is removed to test and analyze the sample. Common biopsy procedures used to diagnose melanoma are punch biopsy, incisional biopsy, and excisional biopsy.

The adoption of Artificial Intelligence (AI), combined with large image database, is showing promising results in distinguishing malignant from benign moles and other non-cancerous skin conditions.

Along with performing image analysis, the network is capable of teaching itself to improve its performance by using a machine learning process.

The process that CNN used in the research is based on an algorithm developed by Google which allows AI to differentiate between thousands of different objects.

However, according to some experts, more work and research is necessary to realize the full potential of this technology for skin cancer diagnosis.

Meanwhile, ongoing technological advancements in optical imaging techniques is also resulting in development of new tools in diagnosis and treatment of skin cancer. 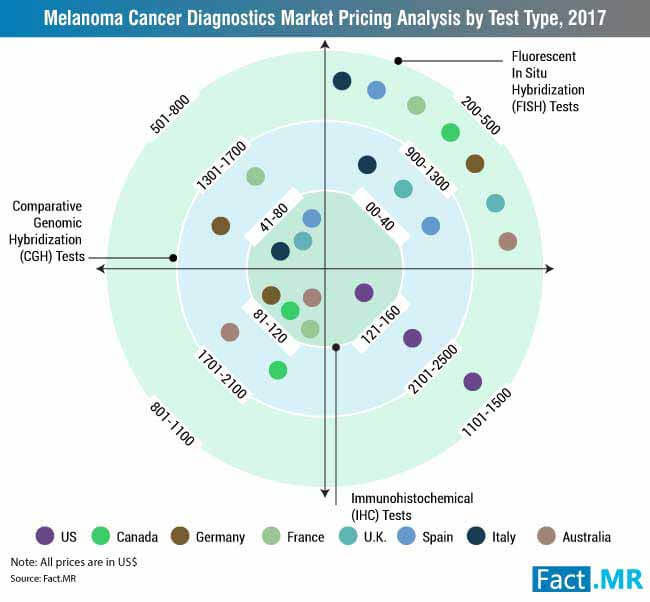 As a part of non-invasive medical devices and techniques, researchers are focusing on techniques of dermoscopy and advanced non-invasive imaging techniques including optical coherence tomography and reflectance confocal microscopy.

Meta-analysis performed in clinical settings demonstrated that dermoscopy has improved diagnostic accuracy of pigmented and non-pigmented lesions. In the near future, physicians would be able to recognize tumor patterns using dermoscopy technique.

There were nearly 300,000 new melanoma of skin cases in 2018, as per the American Institute of Cancer Research.

With the number of skin cancer cases going up in the past few years, focus on providing early detection and diagnosis is increasing.

Melanoma cancer is on a rise owing to the changing environmental conditions and increasing exposure to UV rays. This is driving the demand for rapid diagnostics for early detection of melanoma cancer.

Along with the US, UK is also witnessing a rise in melanoma skin cancer, with around 15,400 new melanoma cancer cases in the UK each year, as per the Cancer Research UK. Two-week wait is the most common way of diagnosing melanoma cancer in the UK.

The most common biopsy procedures used in diagnosing melanoma are excisional biopsy, punch biopsy, and incisional biopsy. However, non-invasive test to diagnose melanoma is also gaining popularity across various countries.

With a rise in melanoma related deaths across various countries, melanoma diagnostics and therapeutics is significantly increasing.

Government initiatives, along with the advancement in technology is also driving the growth of melanoma cancer diagnostics. Notable initiatives include,

With rise in cases of melanoma skin cancer across various regions, researchers and scientists are focusing on developing more precise methods of diagnosis along with cost-effectiveness.

According to the Agency of Healthcare Research and Quality, cancer is one of the most expensive conditions to treat in the US.

Moreover, insurance providers with cost sharing measures are also shifting a huge portion of the medical cost to patients.

This has resulted in more out-of-pocket cost for diagnosis and treatment of skin and other types of cancer.

According to the study published in the American Journal of Preventive Medicine, in 2007-2011, the average annual cost for skin cancer increased by 126%. Economic burden of skin cancer treatment is significantly increasing with a substantial increase in cost in diagnostics and treatment for melanoma.

Centers for Disease Control and Prevention (CDC) also projects that from 2011 to 2030, annual cost of treating patients suffering from melanoma is likely to increase to $1.6 billion from $457 million.

Research presented at 2018 National Cancer Research Institute (NCRI) Conference has also found the rise in the rate of men dying from malignant melanoma.

Without accurate and additional prevention measures the incidences is likely to increase in coming years along with the rise in melanoma diagnostics and treatment cost.

The melanoma cancer diagnostics market report also includes macro-economic and micro-economic factors playing an important role in the growth of the market.

*159 figures and 32 tables includes by FactMR