The quantum dot display technology is witnessing impressive penetration in the television display industry, expected to generate an absolute dollar opportunity worth US$ 7.2 Bn.

During the height of the COVID-19 pandemic crisis, the market experienced significant turbulence. Given the imposition of strict lockdowns, manufacturing units were compelled to cease operations temporarily, affecting output of essential equipment required for quantum dot displays such as cadmium. However, prospects began rebounding once these restrictions were lifted.

Quantum dot displays are well suited for displays due to properties such as high luminous efficacy, high brightness, and low power consumption. The use of inorganic materials prevents burn-ins, which are common in other types of displays. The numerous benefits of using quantum dot displays will be a major factor driving market growth, with Fact.MR projecting a 33% CAGR through 2032.

How is Demand for Enhanced Visibility Encouraging Uptake of Quantum Dot Displays?

Modern displays not only offer higher brightness and contrast ratios but are also available in higher resolutions and consume less power than conventional displays. Display manufacturers are developing displays with improved specifications to strengthen their position in the market.

Quantum dots’ narrow emission spectra and wide excitation profiles enable them to change light into any color in the visible spectrum with greater efficiency. Due to several enhanced properties, quantum dots are being extensively used by display manufacturers.

In recent years, there has been a significant rise in the demand for large-size and high-resolution displays owing to the enhanced visual experience and the decreasing prices of LCDs.

Big-screen displays have become more affordable due to the reduced LCD prices. Owing to the growing focus of display manufacturers on the production of 4K and 8k displays, there has been an increasing demand for quantum dots due to their ability to enhance the display. The adoption of quantum dots in displays provides advantages such as higher image frame rates, greater bit depth, and a wider color gamut.

Cadmium is the most efficient raw material that can be used for the manufacturing of quantum dots. However, heavy metal contamination leads to environmental pollution and has adverse effects on human health. Using heavy metals in household products can lead to major health problems.

What are the Factors Driving Revenue Generation in North America?

Furthermore, the presence of technology providers, as well as increasing investments by government agencies and aerospace & defense in research and development of machine learning technology, influence market growth. A market share worth 40% is projected for the North American market.

How do Growth Prospects Appear in the Asia Pacific Market?

The adoption of quantum dot displays is ever increasing with the growing expenditure on electronic gadgets. APAC, in the last few years has made remarkable progress to become a powerhouse in the electronics accessories industry. 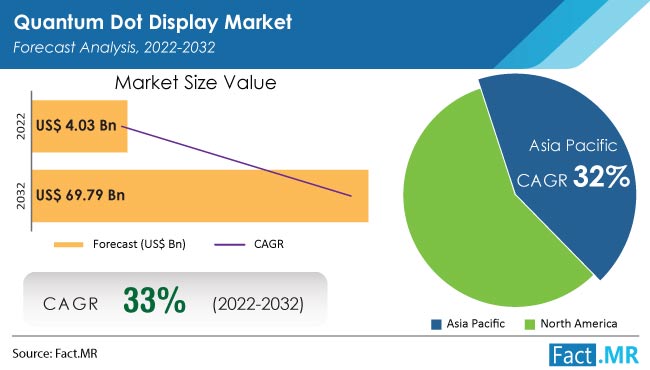 The introduction of quantum display devices into the display industry has the potential to create a new model that could replace LCD panels. Top-tier competitors in the quantum dot display market are developing devices that use cadmium-free quantum dot technology.

Stringent regulations governing the use of cadmium in quantum dots displays will limit their adoption and prevent manufacturers from reaping the benefits of this technology. Cadmium used in display devices has been prohibited in several regions. As a result, quantum dot display manufacturers are transitioning to cadmium-free technology.

The quantum dot display technology is witnessing impressive penetration in the television display industry. The global demand of televisions is growing at a significant rate, with manufacturers continuously developing new components to improve the overall performance and appeal of modern televisions.

The ultra-high quality provided by quantum dot display is becoming a key technological trend in the global television industry. Additionally, a key entity in displays are colors which are a critical focus point by leading manufacturers for enhancing display and improving image quality. The segment is likely to expand 6x across the forecast period.

The quantum dot display market is consolidated with a few prominent manufacturers namely Samsung Electronics Co. Ltd., LG Display Co. Ltd., Sony Corporation, Sharp Corporation and CSOT (China Star Optoelectronics Technology), acquiring a share of more than 70%. Numerous approaches, such as expansion, introduction of new products, joint ventures, agreements, alliances and acquisitions, are being employed by top competitors. Some of the other developments in the market are:

According to Fact.MR, the quantum dot display industry is expected to be worth US$ 4.03 Bn

In North America, the market for quantum dot display is poised to generate 40% of the global revenue

Asia Pacific is expected to be a highly opportunistic market, expanding at a 32% CAGR through 2032

The television segment is expected to be the most frequent end user of quantum dot displays, growing 6x through 2032

*69 figures and 85 tables includes by FactMR