Demand for Phycocyanin to Soar, as an Attractive Color Variant with Superior Properties

Manufacturers are channelizing efforts on production of phycocyanin from Spirulina to gain better market share in this segment.

Phycocyanin has been approved by FDA for usage in food and beverages since 2013 and in the last few years, many companies have started producing phycocyanin due to its growing demand. Companies have also started launching new and innovative colors which can propel the market to newer heights.

Phycocyanin from Spirulina became the most attractive color globally owing to its features and texture and is primarily used in the food and beverage industry.

European Food Safety Authority (EFSA), the regulatory agency of EU countries for food safety has banned the use of synthetic color in food products consumed in EU countries. This has boosted the demand for phycocyanin.

Phycocyanin, being a natural ingredient is seeing immense traction owing to its myriad applications. Phycocyanin from Spirulina has found application in animal feed, pet food and fish food since animals and pets can easily digest phycocyanin and don’t get allergies or medical problems after consuming it.

Phycocyanin from Spirulina possesses anti-oxidants, hypolipidemic and anti-inflammatory properties owing to which it is witnessing high demand growth among food, beverage and cosmetics industries.

Phycocyanin from Spirulina consists of numerous vitamins, Beta-carotene and antioxidants which are expected to push the demand of phycocyanin in the near future.

Phycocyanin is used in applications such as food coloring, clothing, pharmaceutical, cosmetics, paint additives, paper industry, and cancer research in many countries such as China and India.

Moreover, the government of many countries such as India, Angola and Ghana are actively supporting the local spirulina market and building a strong gateway for the development of this super-food which can change the course of the food industry. The increased production of Spirulina has resulted in increased production of phycocyanin. 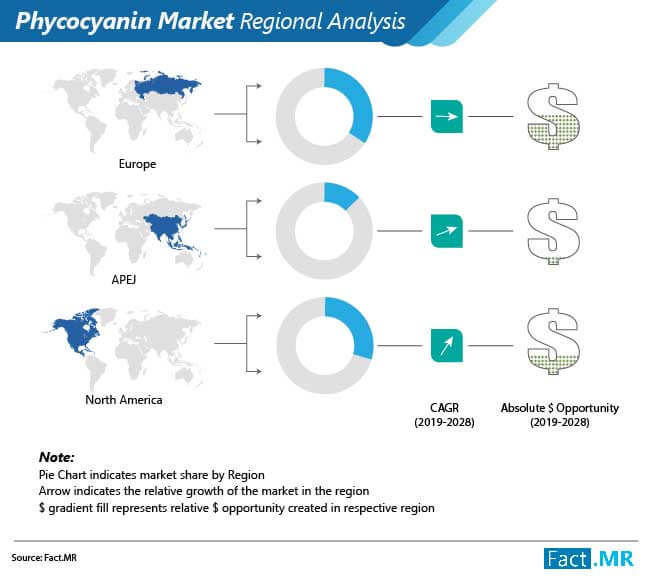 Tier 1 phycocyanin market players such as Chr. Hansen Holding A/S, DDW Inc., DIC Corporation, etc, have been expanding their footprint in the potential markets such as India and China. 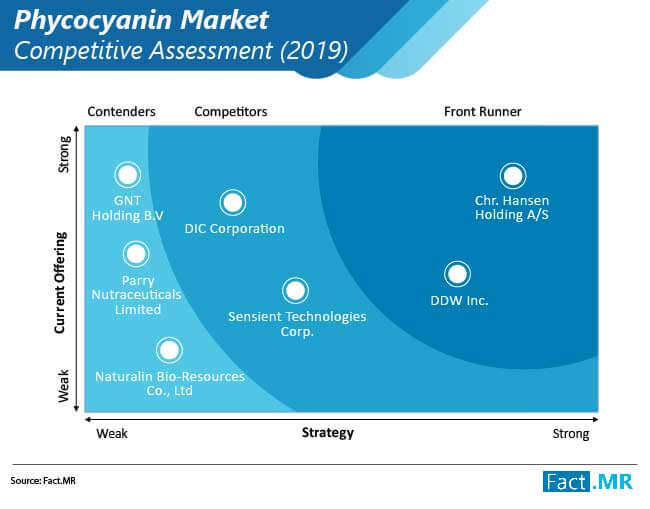 In 2018, DIC announced major expansion of its production capacity for Linablue, a natural blue food coloring which is a phycocyanin variant from Spirulina. This move of the company is expected to solidify its position as global leader in phycocyanin market.

Consumer concerns for food safety and security is rising. According to DIC, the global market for natural blue food coloring will grow at 50% annually from 2018 till 2020 which is projected to boost the growth of phycocyanin market.

Fact.MR’s study has done the segmentation of phycocyanin market on the basis of nature, form, application and region.

What manufacturers are channelizing to increase the production efforts of phycocyanin?

Manufacturers are channelizing efforts on production of phycocyanin from Spirulina to gain better market share in this segment.

What boosted the demand for Phycocyanin?

European Food Safety Authority (EFSA), the regulatory agency of EU countries for food safety has banned the use of synthetic color in food products consumed in EU countries. This has boosted the demand for phycocyanin.