Globally, the demand for humectants is estimated to create an absolute $ opportunity of about US$ 14.1 Bn by 2032. The humectants market is estimated at US$ 26.7 Bn in 2022. Alongside, humectants market accounts for approximately 15% of the overall personal care ingredients market. In terms of geographies, North America is expected to bring in higher revenues and dominate the market by acquiring a market share of about 32.5% in 2022.

Humectants are used as crucial ingredients while making skincare and hair care products attributing to their ability to retain moisture content. Absorption or drawing water vapor from an organism’s or an object’s surface helps humectants in transferring and retaining moisture from air. They are also used as co-solvents in different formulations while preparing several cosmetics and pharmaceuticals.

Effective moisturizing of constituents is essential for production of cosmetics, foods and other consumables. Humectants such as glycerol have been actively used as key ingredients that can regulate the moisture and water activity during manufacturing of products such as cigarettes and skin care lotions, among others. The key role of humectants as additives in the production of organic substances continues to drive their demand across the globe. The above-listed factors are predicted to boost the sales of humectants in the next coming years.

Owing to escalating demand for healthy food & beverages, rising demand for biodiesel, wavering prices of sugar, and a hike in application industries, the market could be served with new opportunities just around the corner. Prominent features such as increasing product shelf life, balancing the moisture content of products and imparting sweetness are expected to uplift the consumption of humectants, particularly in food and beverage industry.

However, in the developed economies such as Europe and North America, the implementation of stringent regulations related to the production and consumption of humectants is expected to hamper the market growth.

Humectant manufacturers must focus on production in accordance with the international quality standards set by regulatory bodies. In the foreseeable future, companies producing humectants are expected to focus on tapping new applications and increasing the flavor properties of humectants.

Moreover, new humectants are being discovered through extensive scientific research projects. Such undertakings will continue to unlock new avenues for growth of the global humectant market in the upcoming years. The demand continues to grow aggressively as manufacturers are finding new applications to utilize humectants in changing the chemical makeup of products.

Humectants Gaining Traction in the Industry

Changing lifestyle in developing countries such as China, India and Brazil, and surging demand for humectants from cosmetics industry is expected to contribute well to the humectants market growth. Additionally, growing demand from pharmaceutical industries for several medicines is likely to fuel the market profitability. For instance, for treating osteoarthritis, hyaluronic acid is used to inject in knees. Besides, increasing demand from food industry for humectant as an additive is predicted to boost the revenue in the next few years.

Also, humectants can be added to water borne paints to preserve the moisture content when stored. Rising population and increased investments in infrastructural activities are expected to show a considerable growth in the paints and coatings industry which in turn is likely to upscale the humectants market.

Competition among Manufacturers Restricting New Entrants in the Humectants Market

In the forthcoming years, increased usage of humectants in different applications across various industries such as food, pharmaceutical and oral and personal care is contemplated to convince the manufacturers to upscale their production capabilities. Marketing strategies such as merger and acquisitions, expansions, new product launches can be adopted by key players in the humectants market in order to upswing their market presence and create a larger customer base.

What is the market scenario of humectants in the U.S.?

What is driving the Europe humectants market? 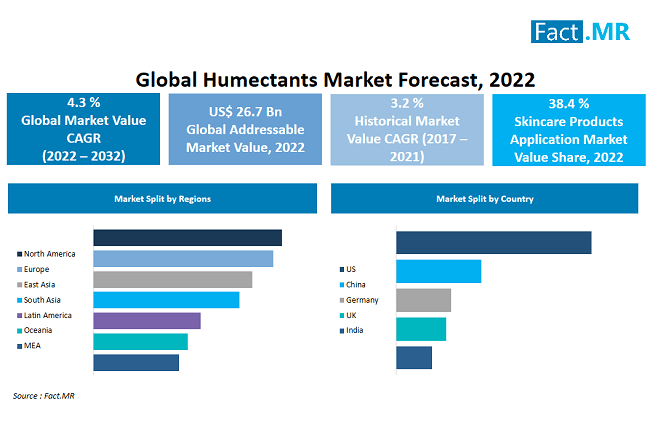 What application type of humectants are the most used in industry?

Which product type generates most of the revenue for humectants market?

The moisture absorption and retention properties of glycerin-based materials will continue to drive the adoption as humectants in the manufacturing of personal care products. Glycerol’s properties in terms of exfoliation, potentiation of preservation activities, moisturization, and solvency will instrument its growing demand in the global humectant market.

Coping up with prevailing competition in the market, several manufacturers have adopted different marketing strategies such as expansion, merger and acquisition, product launches and innovation.

The global humectants market is estimated to be worth over US$ 26.7 Bn by 2022

L’Oreal S.A., Estee Lauder, Beiersdorf AG, BASF, and Avon Products are the most prominent players in the global market

The US, U.K., Germany, China and India are the dominant countries contributing to high demand for humectants

*96 figures and 64 tables includes by FactMR