Micronized salt market has shown a moderate growth trend of more than 3% during 2014 to 2018. Governmental initiatives in Europe and North America for reduction of per capita consumption of salt have pushed market growth. To address the issue, food product manufacturers and food processors have been shifting from traditional salt variants to micronized salt usage, to reduce the amount of salt in their products.

Proven efficacy and compliance with existing industrial processes has been instrumental in this transition towards micronized salt. With increasing government intervention to limit over consumption of traditional salt, market for micronized salts is expected to stay steady on its course and register a CAGR higher than 3% during the forecast.

Micronized Salt with More than 99.5% Purity to Remain in Forefront

Asia-Pacific to Stay in Vanguard in Micronized Salt Market

Asia-Pacific is one of the top regions for micronized salt market, with high production and consumption. Currently China and India together are estimated to account for nearly 30% share in the global micronized salt market. High demand growth from Asia-Pacific region is anticipated over the forecast period, with multi-national companies investing in local suppliers and distributors, to generate new revenue streams.

Growth of food processing industry in ASEAN countries and India is expected to supplement this growth. The region is projected to hold majority share by growing 1.5X over the forecast period. 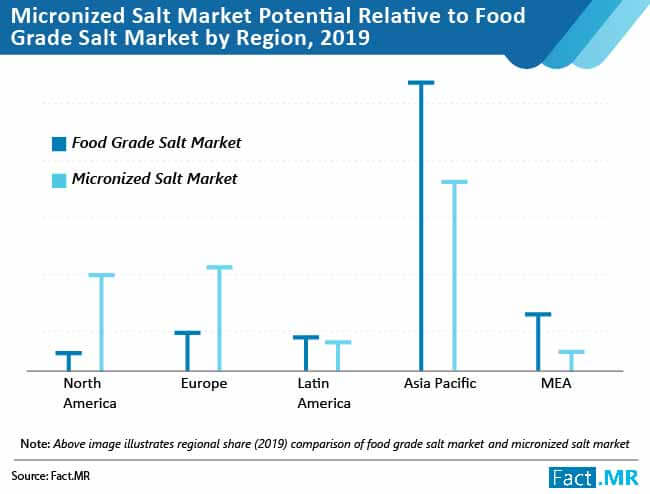 While traditional salts of varying purity has been used in manufacturing animal feed, imposition of maximum residual limits and regulations over usage of chemicals are being implemented. Micronized salts offering high consistency and high purity level after usage, demand in animal feed is expected to increase.

Currently high cost in usage of micronized salt has been one of the impeding factors and development of affordable micronized salt for animal feed usage is expected to be a prominent opportunity for manufacturers.

Top manufacturers have been trying to gain ground in the market with regional expansion. Micronized salts market top players will account for more than 40% share by the end of the forecast period. 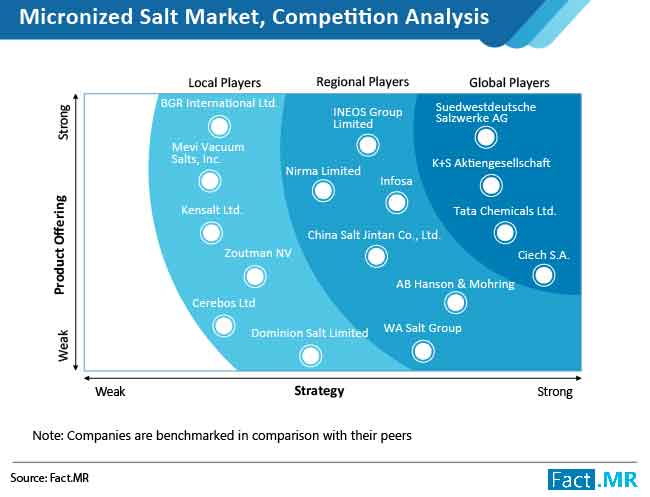 Segmentation table of the global micronized salt market has been provided below on the basis of Product Type, Application, and Region.

This taxonomy and the detailed table of content prepared are confidential and intended exclusively for the individual or entity with whom it is being shared. Reading, disseminating, distributing, or copying this to any party other than addressee(s) is unauthorized and prohibited.

The CAGR of over 3% Micronized Salt market