Global baby diapers market will expand at a steady 5.9% value CAGR between the forecast period 2017 and 2026. Volume sales of baby diapers across the globe are expected to close in on approximately 483,000 million units by 2026-end.

The skin of newborn babies is delicate and highly susceptible to rashes and irritation, which has been top concern of parents regarding wellbeing and health of their newborns.

This has further fuelled demand for organic and natural baby care products, and baby diapers are no exception.

Demand for organic and natural baby diapers can be attributed to absence of artificial preservatives and harmful additives.

A significant trend being witnessed in the global baby diapers market is the surge in R&D investments by leading companies for improving safety and efficacy of baby care products.

Several baby diaper manufacturers have been focusing on developing products that are devoid of the fluff pulp.

Fluff-less baby diapers are gaining higher momentum on the coattails of their attribute of containing more liquid by rupturing the bond between merged layers for increasing space. 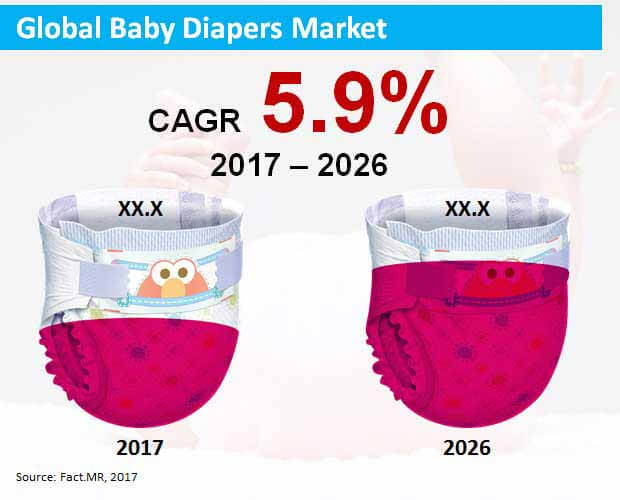 Key market participants profiled by the report are Kimberly-Clark Corporation, Procter and Gamble, Svenska Cellulosa Aktiebolaget SCA and others.

According to studies carried out by Kimberly-Clark, as babies become mobile they are capable of travelling nearly 7 km in a single day.

Banking on this surprising statistic, the company launched its funny online campaign, called “World’s First Baby Marathon”, in 2017, in a bid to promote its diapers as the prime choice for mobile babies.

This further entails the requirement for gaining consumer attention through innovative strategies.

For standing out from the crowd, Genki! worked with the ADK Global Kuala Lumpur for launching the campaign called “WOW Bersama Genki!” in 2017.

Such promotional campaigns by leading as well as niche market player will rub off on future demand for baby diapers worldwide.

With growing adoption of disposable baby diapers driven by increasing hectic lifestyle of consumers across the globe, along with adverse effects of these diapers on the environment have led manufacturers to focus on recycling of disposed diapers.

Procter & Gamble, a leading manufacturer of baby diapers, is taking efforts for diaper recycling in Amsterdam, by partnering with AEB Amsterdam.

This initiative is similar to that being carried out by a P&G subsidiary, Fater, in Italy.

Local authorities are subsidizing this recycling program of P&G, with an aim of alleviating strain of the diaper industry on the environment.

Such recycling efforts by manufacturers will also help them gain consumer attraction coupled with reduction in their environmental footprint.

This will further support the demand for disposable baby diapers in the near future.

Irrespective of intense competitive landscape, the deflationist pressure is likely to prevail on the baby diaper category, as retailers in developed nations continue to wage price wars.

This pressure will also be underpinned by perception toward baby diapers as a key segment for driving traffic and building price competitive view among consumers.

Prominent drivers behind the retailer price war, such as transition to ecommerce, growing competition from direct-to-customer, and constant rise in discounters will prevail and even increase in intensity over mid-/short-term.

A recent Fact.MR report offers actionable insights on the evolution of the global baby diapers market for the foreseeable future.

Qualitative information and quantitative data have been delivered by the report, which track the growth of the global baby diapers market for the period between 2017 and 2026.

The market players can benefit from this report by procuring an all-inclusive researched intelligence, which has been validated around multiple market parameters.

Effective & efficient technologies encompassing the production of baby diapers have been elucidated.

An insightful roadmap regarding future prospects of the baby diapers market has also been provided in the report. The report offers comparative analysis on the fast-expanding market segments and remunerative regions for the market expansion.

Every element related to design, production, and application of baby diapers has been studied in detail for weighing its influence on growth of the market in the upcoming years.

Forecast on country-specific baby diapers market has also been delivered in these chapters of the report, along with a cross-segmental examination of the market.

Various insightful data have been procured through conduction of consistent interviews with the market players, and industry leaders worldwide.

Intelligence imparted by companies have revealed the confidential reality engulfing the development, demand, and sales of baby diapers.

On the basis of current market standings, key companies underpinning the market growth have been identified and profiled in detail, including information on their product overview, company overview, key financials, and key developments.

All information aggregated and offered in this concluding chapter of the report have been contemplated in a balanced manner.

In this chapter, the report delivers valuable insights on the way new strategies can enable improvements in businesses of the existing market players.

Additionally, this analytical research study also issues knowledge about ways of market penetration for new and emerging players, and how these players can use insights offered in the report to make effective future business decisions.