Global thermal interface material sales are currently valued at US$ 2.91 billion and are expected to increase at an impressive CAGR of 8.5% to reach US$ 6.61 billion by 2032.

Consumer purchasing habits have shifted as a result of the COVID-19 epidemic, which has resulted in the increasing use of consumer electronic devices including tablets, smartphones, and video games. Due to the increased need for medications and medical supplies after pandemics, automated solutions are also highly sought after in applications such as those in the pharmaceutical and medical sectors.

It is well known that thermal interfaces offer effective heat management solutions needed to increase the system's overall efficiency and lifespan. Grease, elastomeric pads, thermal tapes, and solders are just a few of the thermal interface goods that are readily accessible on the market.

During the projected period, there will likely be a rise in demand for thermal interface materials due to the increased popularity of electronic consumer goods, automation in developing-nation sectors, and rising middle-class disposable income.

As per in-depth industry analysis by Fact.MR, a market research and competitive intelligence provider, the global thermal interface materials market is predicted to expand at a high CAGR of 8.5% to reach US$ 6.61 billion by 2032. 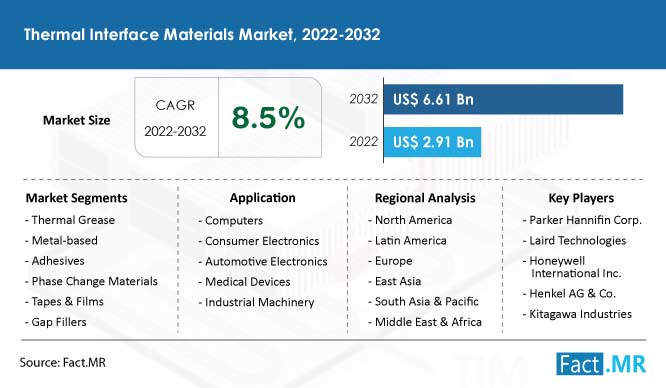 Fluorescent lighting, which uses more energy, is currently being replaced by LED. LED lights, however, have a few inherent physical inconsistencies.

While the LED current should be low to minimize energy losses and heat production, the LED power should be high to produce the appropriate lumen outputs.

An appropriate heat exchange medium is needed, though, to extend the operating life of LEDs. In these circumstances, thermal interface materials are preferred.

They strike the ideal balance between factors including cost, heat dissipation capacity, and available space. The need for thermal interface materials is anticipated to increase proportionally to the demand for LED lights.

Combining the optical and thermal structural form to increase the whole system performance and light quality, along with the electronic driving system, is the challenge of a smart LED design. So, as LED designs advance, the need for and effectiveness of thermal interface materials will change proportionally.

The thermal interface materials costs are directly related to their thermal conductivity. However, an enhancement of heat conductivity also has a detrimental effect on the assembly as a whole due to poor handling and decreased conformability.

How Can the Medical Sector be Profitable for New Producers of Thermal Interface Materials?

Proper thermal management is required for the electrical equipment utilized in the medical sector. To operate constantly and effectively within their operating temperature range, electronics must be kept cool.

The ability to properly move, disseminate, and remove extra heat is made possible by effective thermal management. The need for medical devices has increased, which in turn is propelling the thermal interface materials market.

Factors contributing to this growth include the increasing usage of radiation therapy in the detection and treatment of diseases, as well as the rising demand for wearable electronics and portable medical equipment.

To introduce thermal interface materials with improved properties and increase their possibilities of market share, the industry has seen increased investments and ongoing efforts in R&D.

Which Regions are Expected to Provide Profitable Opportunities to Thermal Interface Material Suppliers?

In 2022, North America is expected to account for 31.7% of the global market share. Due to the recent surge in the perception of smartphones and data, there appears to be excessive demand from the telecom industry in the North American region.

However, growing investments in infrastructure improvement and urbanization that benefit the governments in expanding North American economies are anticipated to be good for the expansion of the regional market.

Offering quick and high-speed networks and repurposing distinctive material, that demands developed bandwidth, leads to the best system implementation. Attributed to the rise in IT workforce participation, innovation, and automation, a similar pattern has been seen in the computer business.

Throughout the projected period, the Europe market is anticipated to expand its revenue at a consistent rate. This is due to a growth in the usage of thermal interface materials in this region brought on by technical advancements and product improvements.

Western nations such as Germany, Italy, France, the UK, and Spain mainly dominate the European market. Europe is likely to hold 25.8% of the global market share, in 2022.

Which Base Material is Expected to Be High in Demand?

Phase change materials are anticipated to experience rapid CAGR growth when compared to other product categories. It finds most use in construction as the desire for cooler structures rises.

To regulate temperature fluctuations, the material functions as heat storage equipment, absorbing heat in the summer and saving it for use in the winter.

Due to the widespread use of thermal interface materials in consumer goods and superior thermal resistance, thermal greases and adhesives are anticipated to dominate the market during the forecasted period.

Due to their ease of assembly compared to greases, elastomeric pads are predicted to have a substantial market share. With elastomeric pads, the handling mechanism is also enhanced because there are fewer opportunities to compromise the interface resistance.

There are numerous small and large-scale manufacturers in the market for thermal interface materials on a global basis. The businesses have thought about expanding and aligning their business processes to address the value chain components of their businesses.

By taking advantage of economies of scale, growing through mergers and acquisitions, and establishing joint ventures, businesses are seeking to preserve their competitiveness in the market. Businesses can increase both the variety and quality of their product offerings through mergers & acquisitions.

What is the predicted growth rate of the thermal interface materials market?

The global thermal interface materials market is estimated to expand at 8.5% CAGR through 2032.

What are key market players’ strategies for gaining a stronger foothold?

How should thermal transfer label manufacturers strategize to experience steady growth in the market...