Due to high-resolution cameras, 8K drones are in high demand among consumers. Nowadays, everyone prefers high resolution cameras because it is crucial to capture good images. Drones in 8K resolution can be utilized for military, disaster relief, or other purposes. Additionally, widely used for recreational activities including photography, racing, and animal watching. Affordable, lightweight drones are in extremely high demand from consumers. Rising drone use and the creation of services associated to drones are predicted to benefit manufacturers during the forecast period.

Leading industry players are working hard and growing their network and resources. substantial infrastructure improvements with the aim of capturing a sizeable market share. 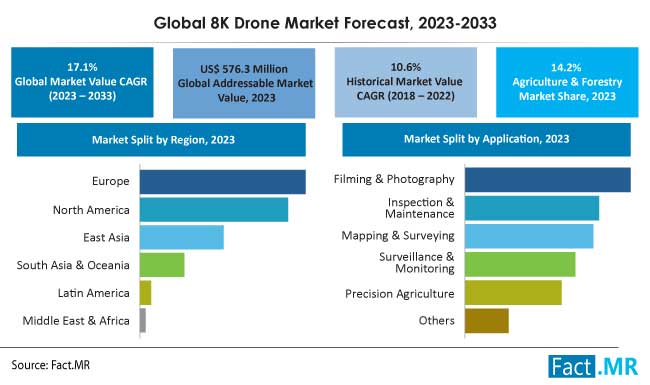 Market share analysis of 8K drone based on application and region is provided in the above image. Under the application segment, the filming & photography sub-segment dominates with 24.4% market share in 2023.

The next generation of security drones will be progressively autonomous, from reconnaissance to weapon delivery. The market for military drone is also expanding quickly as a result of the global geopolitical tensions and escalating security concerns. Drone producers are up against fierce competition in the market due to increased defense spending by various countries. According to Stockholm International Peace Research Institute (SIPRI) analysis, from US$ 1.7 trillion in 2015 to US$ 1.9 trillion in 2019, global military spending increased by an average of 3% yearly.

In addition, the United States has the largest fleet of MALE (Medium Altitude & Long Endurance) and HALE (High Altitude Long Endurance) drones, and major drone producers Israel and United States have increased their production and export of defense drones for both domestic and foreign militaries. As a result, there is greater global demand for drone with high resolution camera.

The media and entertainment sector, building & mapping, distribution and logistics, agriculture makes extensive use of drones. The size and design of drone attachments should change depending on how they will be used. Players in the sector are seeing the necessity for contemporary gear and equipment like advanced drones in place of outdated traditional equipment as they observe the entire market and the demand for safe, clean and speedy outputs.

The value added services that modern drone attachments offer to drone users help to increase the drone's utility and endurance. As drone firm’s battle for market expansion and share through competitive price offerings, the cost of accessories, services and software will continue to decline. The cost of adopting drones will be further decreased by further expansion and there will be increase in drone autonomy among gig, licensed economy drone operators. As a result, there will be a greater demand for drones and their accessories.

What Do 8K Drone Manufacturer Need to Watch Out for?

“Legal Issues on the Use of Frequency Spectrum and Electronic Equipment”

Most drones require some kind of wireless contact with a pilot on the ground in order to conduct a drone flight. Additionally, the payload such as a camera or some other type of sensor, typically requires radio communication. Frequency spectrum is necessary for radio transmission to occur. Depending on the type of drone, the payload and the flight characteristics will determine the frequency spectrum requirements.

International coordination on frequency spectrum utilization is necessary since frequency spectrum does not end at national borders and manufacturers need (semi) global markets. Aeronautical services have a number of frequency bands designated to them. These frequencies have historically been used for human aircraft operations.

These frequencies have historically been used for human aircraft operations. Such legal concerns involving the frequency spectrum and electronic payloads may have an effect on the 8K drone market.

How 8K Drone Market is Skyrocketing in United States?

United States accounts for 38% of the world share in military spender. In 2019, United States spend around US$ 6 billion on drone cameras. Now days, drones are also widely used for commercial purpose due to rising construction, agricultural activity and etc.

Why is the United Kingdom 8K Drone Market Expected to Be Highly Lucrative?

Drone flying is permitted in United Kingdom, according to the British Model Flying Association (BMFA) takes care of all the regulation for flying drones. Aforementioned factors are anticipated to boost market demand and expansion in United Kingdom in the long term.

Why is the Demand for Filming and Photography is Expected to Surge the Market?

Globally the rising disposable income have risen the consumer spending power and preference. End users are now inclining more towards drone cameras instead of conventional drones. As the drone cameras provide more high resolution image and better clarity. The increasing tourism and recreational activity created the demand for high resolution drone cameras. The global photography industry was valued around US$ 36.4 billion in 2021.

Therefore, the widespread sharing of pictures on social media for special occasion for instance wedding, special events and portraits will lead the market growth of 8K drone camera. As more people and businesses seek professionally taken photos for media communication, public relations, and other professional services, photographers should profit from this trend. The need for professional photography services is being further fueled by the increased internet usage in many developed and emerging nations, particularly among urban and younger populations.

Why is Market Growth Being Led by the Media and Entertainment?

The media and entertainment industry will be the key segment to drive the market of 8K drones. Media and Entertainment (M&E) industry in United States is the largest media industry worth of US$ 660 billion out of the US$ 2 trillion global market. Furthermore, the digitization of content and constant innovation in technology will drive the market growth.

However, during the pandemic the market has seen downfall. Live entertainment had to be discontinued due to societal restrictions, but this also raised demand for over-the-top video and data consumption, which led to an upsurge in online video and television throughout the epidemic. Overall, the media and entertainment sector is anticipated to continue seeing strong growth in the future.

There are numerous large and small market players in the 8K drone market, which is differentiated. Therefore, producers must distinguish their products using cutting-edge technology and distinctive items in order to prosper in such a competitive climate. In order to maintain market positions in this highly competitive environment, product prices may need to be reduced, which could negatively impact manufacturers profit margins.

Europe will lead the global 8K drones market accounting for 36.1% market share in 2023.

Filming & Photography will account for 24.4% share of the global market by creating the valuation of US$ 140.8 million in 2023.