Demand is surging due to the high usage of drones for both, commercial and recreational purposes, along with the incorporation of advanced technology undertaken by drone manufacturers in the market, with the western region of the country accounting for bulk of the market share.

Drones are also known as unmanned aircraft systems or unmanned aerial combat vehicles (UACVs). The drone market in the United States is growing at a rapid pace because of the high application of drones in several end-use areas. Drones are being used for commercial and recreational purposes alike. Commercial applications of drones are for surveillance and security measures, in defense and border security systems, for film and television purposes, etc.

According to the Federal Aviation Administration (FAA), out of the total number of drones registered in the United States, 37.1% are commercial drones and the rest 62.9% are recreational drones. 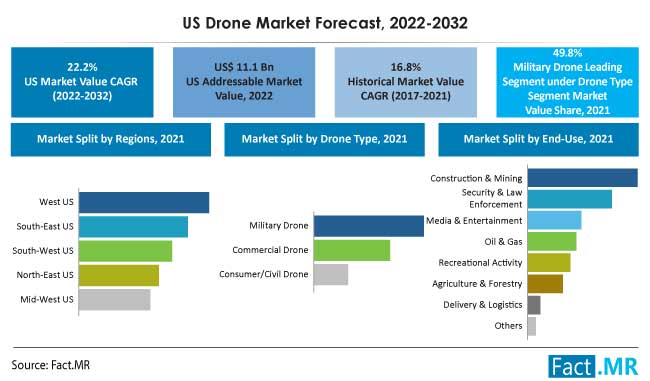 Market share analysis of drone type, end use, and region is provided in the above image. Under drone type, military drones dominated with 49.8% market share in 2021.

What Makes the U.S. Such a Lucrative Market for Drone Manufacturers?

Furthermore, companies are now making drones for commercial applications as well, with higher power drone motors coming to the fore. Also, home deliveries through drones have now become a reality with the help of retail and logistics organizations such as Amazon. Also, with product advancements in drone technology, drones can now travel at a speed of up to 100 miles per hour and can also aid in the transportation of products.

Companies are investing substantially in the research and development of advanced drones and various drone accessories, thereby driving market growth by more than 7X during the forecast years of 2022-2032.

In the United States, the Federal Aviation Administration (FAA) regulates drones or unmanned aircraft systems and has laid down general rules for flying drones in the country. For instance, drones are allowed for recreational and commercial use in the United States and there is a provision of details on flying drones for fun or work.

Drones need to be registered with FAA, which is then valid for three years. The law also describes how, when, and where a person can fly a drone for recreational purposes. All safety guidelines of existing aeromodelling organizations and safety guidelines provided by FAA need to be followed.

The West U.S. drone market accounts for the largest market share of 28.7% and the regional market is projected to expand at 22.8% CAGR during the assessment period. This high growth is attributed to several factors such as advancements in drone technology, favorable government initiatives, and rising demand for drones from businesses across industries.

In addition, FAA has laid down certain rules and regulations for drones related to the legal and safe operations of drones in commercial environments. This is estimated to lower entry barriers and boost drones market growth in the region over the coming years.

Will the U.S. Military Continue Dominating Demand for Drones in the Country?

The drone market is segmented into consumer/civil drones, commercial drones, and military drones. The military drones segment dominates the market with a high 49.8% market share. The segment is projected to rise at 22.5% CAGR owing to rising defense expenditure by the government of the United States.

Furthermore, as the international political arena has become highly volatile, even the Ukraine-Russia war is a contributing factor, and the U.S. is investing substantial amounts in strengthening its military capabilities and surveillance activities.

On the other hand, the commercial drones segment holds 34.6% market share and is projected to register 22.1% CAGR over the decade.

Why are Sales of Construction Drones Rising Rapidly?

Under end use, the drone market in the U.S. is segmented into delivery & logistics, media and entertainment, construction & mining, oil & gas, security & law enforcement, recreational activities, agriculture & forestry drones and others.

Amongst these, construction drones dominate the market with 27.8% market share. The construction drones segment is projected to surge ahead at 22.9% CAGR on the back of the augmented use of drones for conducting visual inspections on building sites and high-risk areas. Efficiency is improved as drones can collect real-time data that is highly effective for communication and administration.

In addition, surveyors and engineers use drones to visualize the progress made in their construction projects by taking overhead images. Having a project overview leads to simplification of decision-making, thereby streamlining building site operations.

Apart from this, drones find usage in security and law enforcement, which holds 21.3% share and is projected to expand at 21.2% CAGR through 2032.

The U.S. drone market is expanding rapidly on the back of innovation being undertaken by key players in the market. Prominent drone manufacturers are incorporating advanced features and functions in drones and are also focusing on research & development and collaborative activities to gain an edge over their competitors in the market.

Companies are also focusing on state-of-the-art manufacturing processes and tools such as advanced assemble techniques, robotic automation, etc., leading to quality enhancement in the market.

Fact.MR has provided detailed information about the price points of key manufacturers of drones positioned across the U.S., sales growth, production capacity, and speculative technological expansion, in the recently published report.

The U.S. drone market is currently worth US$ 11.1 billion.

Sales of drones in the U.S. are anticipated to surge to a market valuation of US$ 82.9 billion by 2032-end.

*131 figures and 84 tables includes by FactMR