Rescue ladders and fire hoses typically have lengths of under 50 meters, and they are generally only used on one side of the building. The fact that most high-rise structures are located in urban cores means that traffic might delay the arrival of the firefighters at the scene.

Based on the above factors, autonomous firefighting drone revenue is projected to create absolute dollar opportunity of US$ 7,383.5 million and witness 4.7x growth during the forecast year.

From 2018 to 2022, the global market for autonomous firefighting drone registered a CAGR of 14.2% Fact.MR, a market research and competitive intelligence provider, reveals that the market will exhibit growth at 16.7% CAGR between 2023 and 2033. 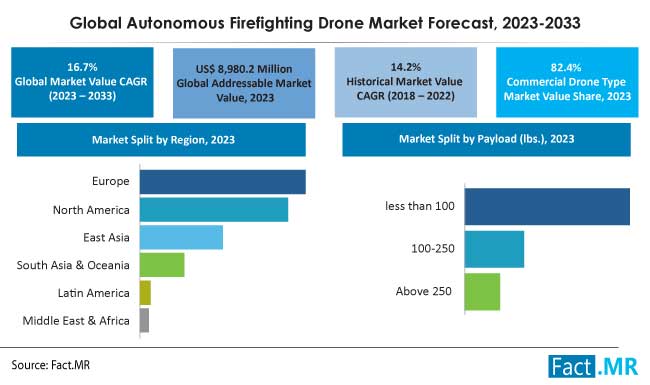 Market share analysis of autonomous firefighting drone based on payload (lbs.) and region is provided in the above image. Under the payload segment, the less than 100 lbs sub-segment dominates with 61.9% market share in 2023.

Thus the rising infrastructural development will need enhanced safety and thus the regular monitoring of the development sites is necessary. for such cases autonomous firefighting drones can be used. Due to the increasing traffic it has become difficult to reach the venue during emergency situation these type of drones will help to reach on time to the venue.

It is projected that the military sector will continue to dominate the market for the duration of the forecast. The military employs autonomous firefighting UAV drones for a range of tasks, such as air warfare and ISR applications. Governments, businesses, and other organizations are presently attempting to integrate current drones with cutting-edge technologies like artificial intelligence. In addition to the existing autonomous drone models on the market, both businesses are investing in the development of additional drone models.

Moreover, due to the extensive commercial usage of mapping, observation, surveying, and inspection studies, the construction industry is projected to present a significant opportunity for market expansion. In the coming years, the industry is expected to rise due to the increasing use of autonomous firefighting drones.

What Do Autonomous Firefighting Drone Manufacturer Need to Watch Out for?

“Drone Safety and Security Issues Can Hamper the Market Growth”

Drone use has been highlighted as posing a major and potential risk to information security. Many drones have significant design faults, no wireless security protection, and video encryption software. Threats can include the potential for technological difficulties. Application faults can lead to technical problems with drones and cause them to crash or take off, such as lost connections between users' remote devices and drones.

How Autonomous Firefighting Drone Market Is Skyrocketing in United States?

In the United States, all drones must be registered with the Federal Aviation Administration (FAA) at the FAA Drone Zone website and all commercial drone operators must hold a current FAA remote pilot certificate. The certificate is intended for anyone who makes money flying drones, such as research teams and photographers, and provides a basic understanding of what other commercial pilots are doing in the airspace around their drones.

It is designed to ensure that have a thorough understanding of market players are focused on incorporating advanced technologies such as machine learning (ML), Internet of Things (IoT), and computer vision into their solutions. Therefore, the U.S. autonomous firefighting drone market is expected to reach US$ 549 million by 2023.

Why is the China Autonomous Firefighting Drone Market Expected to Be Highly Lucrative?

China is expected to witness significantly robust revenue growth during the forecast period owing to an increase in autonomous firefighting drone monitoring systems and providers. Drones are often used to monitor activity in the for the emergency services. The country is investing in increasing technological advances to keep up with rising urbanization.

Which Payload Capacity is expected to surge the market?

The payload capacity is bifurcated into three parts which is less than 100 lbs., 100-250 lbs. and above 250 lbs. as the autonomous firefighting drones of the range less than 100 lbs. will be highly in demand as the drone will be lighter in weight and have the maximum capacity to carry during emergency situations.

Which Drone Type lead to the Market Growth?

Manufacturers are launching a number of cutting-edge product lines and offering highly tailored solutions to address particular industry needs as a result of their recognition of the application possibilities. Despite a COVID-19-related slowdown, the market performed remarkably well in 2020, which can be lead to widespread adoption throughout the healthcare sector.

COVID-19 pandemic have accelerated the demand for unmanned Ariel vehicles and reduce dependency on human as the drones can work much faster and more efficiently without mistakes. The commercial drone type will account for 82.4% of market share and value may reach up to US$ 1,579.5 million by the end of 2023.

The market for autonomous firefighting systems is fragmented, with both major and minor market participants. Therefore, producers must distinguish their products using cutting-edge technology and distinctive items in order to prosper in such a competitive climate. In order to maintain market positions in this highly competitive environment, product prices may need to be reduced, which could negatively impact manufacturers' profit margins.

The global autonomous firefighting drone market is currently valued at US$ 1,916.8 million in 2023.

Less than 100 lbs. autonomous firefighting drone services accounts for 61.9% share of the global market in 2023.

Worldwide demand for autonomous firefighting drone is anticipated to reach US$ 8,980.2 million by 2033-end.