While prevalence of cervical dysplasia has increased since the past decade, women are becoming more aware regarding the related symptoms, diagnosis, and treatment of the disease.

Furthermore, increase in number of awareness campaigns, governmental investments, and a flurry of products launched by manufacturers of diagnostic devices are propelling market growth.

The global cervical dysplasia diagnostics market is subject to thrive on key players operating in main regions such as North America, Europe, and Asia Pacific.

A recent study by Fact.MR provides a holistic overview of the cervical dysplasia diagnostics market, along with new trends, growth & restraining factors, and demand-supply patterns across the world.

The report also talks about how the COVID-19 pandemic has affected market growth, and what the forecast years of 2021 to 2031 will offer.

Rise in requirement of diagnostic tests and devices has catered to the growth of manufacturers and suppliers in this industry during the last 5 years from 2016 to 2020.

Increase in concerns regarding the severity and fatality of cervical dysplasia is compelling more women to go in for timely and regular diagnostic tests, such as Pap test, HPV typing test, and colposcopy, to name a few.

As women at a reproductive age are more vulnerable to cervical dysplasia, growing number of campaigns and initiatives are making them gain more knowledge regarding related preventive measures.

According to the World Health Organization (WHO), women who are 15 to 49 years old are considered to be of reproductive age.

While cervical dysplasia refers to abnormal growth of cells on the line of the cervix, if left untreated, it can lead to a more serious disease such as cervical cancer. According to a report titled “Cervical Cancer (CCU) Factsheet”, published by the European Network of Cancer Registries, the European estimated average incidence of cervical cancer is nearly 14 cases per 100,000 persons per year, while the mortality rate has been increasing since 2012.

As stated in a report published by the American Cancer Society® in 2021, cervical cancer is most frequently diagnosed in women between the ages of 35 and 44, with the average age of diagnosis being 40, while this cancer rarely occurs in women who get regular testing done.

What are the Key Challenges Faced by Market Players?

While early diagnosis and treatment of cervical dysplasia is of utmost important in order to remain on the safe side, women in rural & underdeveloped areas are yet to become enough aware regarding its fatality.

As stated in a report titled “Cervical Cancer Screening in Rural India”, published by the Indian Journal of Medical Research in 2018, the cervical cancer screening rate is quite low in rural areas of India, while the rate of cervical diseases such as cervical carcinoma and dysplasia is more than 15% in these areas.

However, players in this industry are optimistic regarding the spread of awareness in these regions, while they are constantly investing efforts to launch more cost-effective range of products and diagnostic solutions for cervical dysplasia. 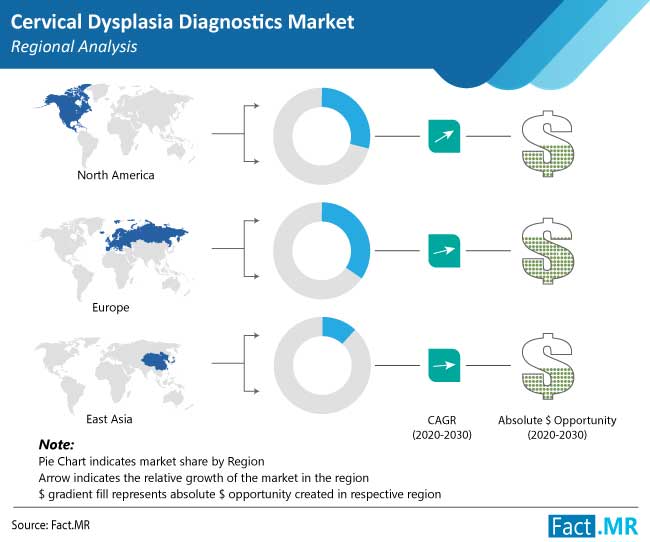 Why is the United States the Largest Market for Cervical Dysplasia Diagnostic Devices?

The United States is presently dominating the world’s largest cervical dysplasia diagnostics market of North America, and is predicted to remain so in the foreseeable future.

Rise in prevalence of cervical dysplasia and growing inclination towards regular diagnostic tests for the same are spurring market growth in the country.

As stated in a report published by the Hopkins Medicine Organization, cervical dysplasia affects between 250,000 and 1 million women throughout the United States every year. As per the report, though women of any age can develop cervical dysplasia, the condition is most frequent in those between ages 25 and 35.

According to the National Center for Biotechnology Information (NCBI), nearly 93% of American women reported to have had at least one Pap Smear Test in their lifetime. These statistics represent how lucrative the U.S. is for key industry players.

Germany is currently leading in the world’s second-largest cervical dysplasia diagnostics market, Europe, and expected to lead throughout the forecast period as well.

Backed by the highly advanced medical & diagnostic sector and highly developed manufacturing hubs, Germany is in the spotlight for stakeholders in the cervical dysplasia diagnostics space.

As per a report published by the Enterprise Europe Network, German medical device specialists have been distributing and leasing medical equipment to hospitals and other clinical institutions in the country successfully for more than 15 years.

Why is China the Fastest-growing Market for Cervical Dysplasia Diagnostics?

China is the focal point of the world’s fastest-growing cervical dysplasia diagnostics market, Asia Pacific. Rise in the rate of cervical cancers and increase in requirement for diagnostic devices from hospitals are spurring growth in China.

As stated in a report published by the China HPV Information Centre on 17th June 2019, China has a population of 557.32 million women aged 15 years and older, who are at risk of developing cervical cancer.

Current estimates indicate that, every year around 106,000 women are diagnosed with cervical cancer and approximately 48,000 die from the disease. This rings an alarm for women in this age range to take preventive measures for cervical diseases, such as cervical dysplasia.

What Makes India Highly Lucrative for Diagnosis of Cervical Dysplasia?

As stated in a report published by the NCBI, in India, cervical cancer contributes to nearly 6 - 29% of all cancers in women, while the age-adjusted incidence rate of cervical cancer varies widely among registries, with its peak in the Mizoram state.

According to a report published by the Medanta Organization, cervical cancer is the second-most common type of cancer amongst women in India. This, in turn, is catering to the growth of market players in the country.

How is Rising Demand for Cervical Dysplasia Diagnostic Tests Favoring of Market Players?

Presently, diagnostic tests, followed by diagnostic devices, are leading the market in terms of product type. Increase in requirement for various diagnostic tests such as Pap Test, pelvic examination under anesthesia, and computed tomography scan, to name a few, has been bolstering growth of this segment since the past decade.

Which End-use Industry is Leading This Space?

Presently, hospitals in the dominant segment in the market in terms of end user, and is expected to lead over the coming years as well. According to Fact.MR, the global hospital services industry is forecast to expand at close to 6% CAGR through 2031. This will indirectly aid demand for cervical dysplasia diagnostic devices in the near future.

Key players are focusing on diversifying their products in order to remain dominant. For instance,

Which are the top companies operating in this industry?

Which are some of the lucrative markets for cervical dysplasia diagnostics?

The United States, Germany, the United Kingdom, China, India, and a few others are lucrative markets for cervical dysplasia diagnostics, and are expected to dominate throughout the forecast period.

Which is a highly sought-after product type for cervical dysplasia diagnostics?

Presently, diagnostic tests are the mostly sought-after in terms of product, and are expected to keep leading over the forecast period of 2021 to 2031.

Which are the key end users of cervical dysplasia diagnostics?

Presently, key end users of cervical dysplasia diagnostics are hospitals, academic & research institutes, and others, which will aid demand growth over the coming years.

Global home diagnostics market will expand at a healthy CAGR of around 5% through 2030.North America...

Global PCR and Real-time PCR Molecular Diagnostics Market is estimated to Surpass US$ 6 Bn by 2030, ...

Diabetes Diagnostics Market to grow at steady CAGR growth during 2020-2030. Europe will be attractiv...

Melanoma Cancer Diagnostics Market is being driven by a growing emphasis on early detection and prev...