Modern warfare and military combats across countries are being redefined with technology. The flow of information across military hierarchies has led to the evolution of defined horizontal and vertical communication. Budget planners and countries across the world have been increasing the proportion of digital battlefield technology share in their overall military and defence budgets.

Historically, the use of digital battlefields increased at 10% CAGR from 2017 to 2021, with key factors assisting this growth including companies' close communication with military budget planners and making their solutions flexible and customizable to suit a country's military and defense goals.

As the COVID-19 pandemic unfurled throughout 2020, prospects were altered drastically, as closure of international borders to contain the spread of the disease led to a decline in warfare and military operations. Since 2021, however, as borders have opened up, intelligence gathering on hostile international activities have gained momentum, thereby restoring projections.

The high capability of 5G technology, which can support over 1 million devices in a square kilometer range, will push the demand for digital battlefield products across the globe. Multiple devices including military devices embedded with smart sensors can be connected to each other using 5G network.

All autonomous systems or platforms for the digital battlefield, such as armored vehicles and unmanned ground vehicles, can work on a 5G connection through which data is transferred at high speeds in real time. This data is interpreted, received by the systems through the network, and used by autonomous platforms to take action.

The integration of GIS and GPS can provide location and visualization aspects for defense forces and can be effectively utilized by the surveillance systems used in digital battlefield.

How attractive are Growth Prospects across North America?

The United States' new defense strategy indicates an increase in military spending to include advanced capabilities in the US Army's existing defense systems to counter incoming threats. Lockheed Martin Corporation (US), Northrop Grumman Corporation (US), L3Harris Technologies, Inc. (US), and Raytheon Technologies Corporation are among the leading manufacturers and developers of AI systems in the U.S.

The US Department of Defense selected Northrop Grumman Corporation to supply the forward area air defense command and control system in July 2020. (FAAD C2). The FAAD C2 will aid in the defense of small unmanned aerial systems. This system has demonstrated its performance and flexibility by allowing for simple integration with existing sensors and warning systems for launching real-time defense in close range and maneuvering enemy threats.

What is the Key Factor Enabling Growth in China?

With US$ 261 billion military spending, China was the second-largest military spender after the U.S. in 2019. The country has seen several neighboring and distant foes in the recent past, which has led it to constantly increase its military budget. Its tussle with the U.S., India, Japan, South Korea, Vietnam, Malaysia, and Taiwan has encouraged the country not only to invest in traditional warfare mechanisms but also in new technologies.

The country’s People’s Liberation Army (PLA) ranks among the leading militaries equipped with artificial intelligence and anti-ship ballistic missiles. The country’s Strategic Support Force, which was established in 2015, is engaged in channelizing electronic warfare, cyber warfare, and psychological operations. China is expected to account for nearly 13% of global digital battlefield revenues by 2032, showcasing an absolute dollar opportunity of around US$ 14 Bn. 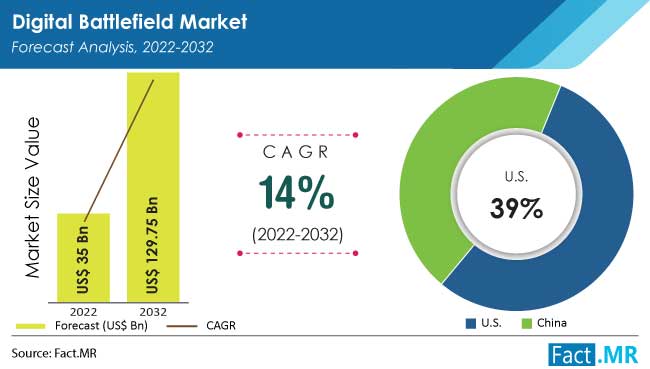 Which Type of Installation Holds Larger Market Opportunity in the Future?

New procurement of digital battlefield solutions are expected to hold more than 50% share in the market. As countries have been replacing their existing military equipment and solutions with digital counterparts, new procurement is expected to account for a larger market share.

Which Digital Battlefield Platform Holds Significant Opportunity in the Market?

Key players in the digital battlefield market discussed in the report have focused on winning new orders and contracts for digital battlefields. Strategies include product launches, collaborations with key players, partnerships, and mergers and acquisitions. Some of the key development are:

What is the anticipated market worth of digital battlefields in 2022?

According to Fact.MR, the digital battlefields market is expected to be worth US$ 35 Bn in 2022

At what rate did the market for digital battlefields surge in the past 5 years?

As per the report, what is the expected forecast CAGR for the digital battlefield market?

Which is the value at which the digital battlefield market is likely to close in 2032?

How much is the North American digital battlefield landscape worth?

What are the growth prospects for digital battlefield solutions across China?

Which is the most preferred digital battlefield based on installation?

By installation, new digital battlefields are most sought after, expected to capture 50% of the global revenue

Which category of digital battlefield is likely to hold maximum sway based on platform?