Drone use for resource management and data collection has accelerated globally. All things considered, the analysis of the overall market for the same time period shows a significant increase in demand, with the exception of 2020, when it experiences a decline owing to pandemic.

Rapid technological advancements in drone batteries designs have given customers access to cutting-edge products at competitive pricing. Due to their high price and technological complexity, traditional drones have only been used by the military; but, owing to economies of scale, individuals may now buy drones for about $100. This is expected to increase demand for different batteries as the requirement for replacement rate is higher.

Over the 2017-2021 historical period, the global drone batteries market registered a CAGR of 5.6%, and according to the Fact.MR, a market research and competitive intelligence provider, the market is projected to exhibit growth at 8.3% CAGR between 2022 and 2032. 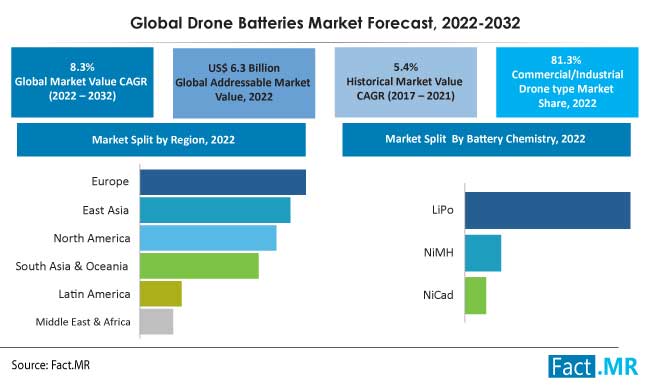 “Rising Demand for Aerial Imaging and Data Collection Through Drones”

Drones have always proved to be fruitful to the world of photography due to its applications of capturing the world with new angles and technology. Aerial photography and data collection has become more reliable and simple due to the innovation of drone technology. Photographers around the globe now consistently use drones as a medium to take attractive aerial images and even capture photographs which are difficult to take for humans.

Data collection becomes easier with the intervention of drone technology. Drones have become prominent by removing the barrier of physical capabilities in collecting data. Now, drones are even connected to cloud computing for the purpose of collecting and analyzing data. Furthermore, increasing digital transformation has driven the demand for drones.

Drones have been deployed by various industries in order to leverage their data collection capabilities using advanced cloud-based sharing of data using existing networks. Due to this benefits, demand is rising for drone battery and it will also upsurge the market growth of drone batteries.

Drone technology has proved its utility in defense intelligence and military operations. Initially, drones were completely focused on gathering vital information about the enemy’s base and finding prime locations for evacuation during war time. Drones have been successfully instigating airstrikes without physical intervention of military troops.

In the current scenario, safety of troops and defense equipment is a prime concern for nations. Drones provide comprehensive coverage of a nation’s base in real time while not putting human life at stake. Countries across the globe have been continuously encouraging the use of drones in their military, which has provided impetus to the demand for drone batteries.

Drones are used to successfully make strategic plans of action due to their data gathering capabilities, for real-time surveillance, identifying targets, recording important missions for training, protecting existing infrastructure and continuously enhancing the nation’s safety. Drones have enabled more effective counter-insurgency measures, enabling intelligent decision-making with improved IoT-based systems. Owing to aforementioned factors, the demand for drone batteries is expected to reach the valuation of US$ 6.3 billion over the forecast period.

What Do Drone Batteries Producers Need to Watch Out for?

The most recent and demanding opportunity for drones is the growing food delivery industry. In 2016, the Federal Aviation Administration approved drone-based food deliveries in urban areas.

During the tough times of Covid-19, drone-based delivery emerged as the savior for the sinking food delivery industry, as people across the globe could order food online and get it delivered using drones while maintaining government norms of social distancing and physical hygiene.

Drone-based delivery seems to be reliable and economical, considering all the factors. Continuous growth in the food delivery industry has positively affected the drone market, which further encourages the drone batteries shipments.

Why is the High Demand for Drone Batteries Market in the U.S.?

The United States drone batteries market is estimated at US$ 2 billion by 2022 and is expected to reach US$ 4.9 billion by 2032. United States is the leading country in the drone market owing to strong positive network position in the regional consumers. Apart from regional regulations, consumerism also have a strong trade effect on drone batteries market.

Why is the Russia Drone Batteries Market Expected to Be Highly Lucrative?

Country’s interest in developing the drone technology to be implemented in widget pool of commercial applications, marks the date for the country to become global leader in the drone market implying the same for drone batteries market.

Apart from the technological advancements and innovations for commercial industries, the defense sector of the nation is also set to pamper and steer the demand for drone batteries market.

Accounting to the above-mentioned regional factors, the Russia market for drone batteries is expected to reach a valuation of US$ 433.6 million by 2025 and grow at a rate of 7.9% over the long run forecast.

Why LiPo Batteries Have Higher Dominance Over NiCad and NiMH?

In addition to those, LiPo batteries also offer flexibility for manufacturers to manufacture the batteries in customized shape and size. LiPo drone batteries has boosted the technological aspects for battery chemistry and has become popular among end users. Constantly tracking consumer responses and feedback has made possible to study the flaws with existing drone batteries technology which are restricting the growth of the drone batteries market. LiPo batteries will be surpassing a market valuation of US$ 4.7 billion in 2022.

Why Do Commercial Drone Batteries Are Expected to Have Notable Demand in The Future?

The commercial drones are going to witness a remarkable tag on the industrial applications. The ongoing innovative advancements, experimental runs and discussions among the regulatory bodies to develop robust dimension of drones. Commercial segment is set to pump up the threshold of drones and compelling the same with drone batteries.

Alongside, recreational as drone racing is also set to hit the drone batteries market to encounter greater opulence. In addition, defense being the eternal recourse for drones, the market for drone batteries will flourish with the aid of all above-mentioned factors. Commercial drone batteries are expected to reach US$ 11.9 billion by the end of the assessment period.

The world’s leading manufacturers of drone batteries products are employing sustainable technologies and optimization systems for diverse end users. Key manufacturers are focusing on developing new product designs to address problems in terms of product placement in harsh operating environments. Moreover, expertise and professionalism in planning, designing, and providing optimal pressure control solutions are at the backbone of their marketing strategies.

The global market of drone batteries is expected to reach valuation of US$ 6.3 billion in 2022.

Worldwide demand for drone batteries is anticipated to reach US$ 14.1 billion by 2032-end.